Support on Patreon Follow @wellshwood
74 Comments
Two in a Row

I don’t feel like writing anything now, but I’m now officially thumbs-up on Milk and Frost/Nixon. On a 1 to 10 scale, I’m giving them both an 8.5 — and that ain’t hay. Others are going to bestow 9 or 9.5 ratings, and that’s fine also. 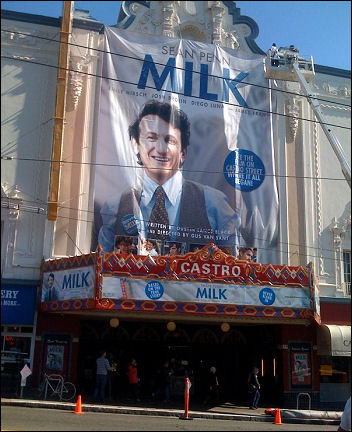 Daylight tells you this was taken prior to this evening’s Milk premiere at the Castro. Photo by Randy Matthews.

I’ve been hearing iffy things about Milk for the last week or so, but I have to conclude that those who’ve been spreading the iffy stuff are by and large mean-spirited and, I feel, overly demanding. Milk cares, holds back, pushes through and gets it done. It’s compassionate, exacting, precisely ordered and emotional in most of the right ways. As for Frost/Nixon…well, I’ve seen the stage play and was ready for the worst, but I really don’t get what the London haters were on about.

I felt a genuine gayness from Sean Penn, who plays the title role of the late San Francisco supervisor Harvey Milk, that I didn’t think he had in him. Emile Hirsch and James Franco give the stand-out supporting perfs.

I was down with Ron Howard‘s film from start to finish. It’s very well done, very full and expert for what it is. It’s more satisfying, more underlined (but in a subtle way) and more clearly wrought than the play, frankly. It’s not Kubrick, Bresson, Kazan, Eisenstein, Welles, the Coen brothers or Lubitsch. It is what it is, and that’s in no way a problem. And it significantly improves upon what it was on the New York stage.

And Frank Langella‘s performance as Richard Nixon is naturally and necessarily more toned down than it was on-stage, and that, Honest Injun, makes it a fascinating, moving (as in genuinely sad), award-level effort.

“It’s really important to tell people to go out and see W. so they can talk about it and have an opinion about it and this freedom of speech, of course, that allows us to go and talk about a film about a current sitting president.” — Ben Lyons speaking on Sneak Previews, according to Erik Childress‘s efilmcritc.com. The quote results in Childress calling Lyons “the Sarah Palin of film criticism.”

A Daily Beast article by Paul Alexander claims that while Barack Obama is sending out signals that things are going well and that success looms, the behind the scenes mentality is fraught with concern about voter suppression as well as the Bradley Effect.

“The Obama leadership believes there is a systematic campaign,” a source tells Alexander, “by the White House and the Justice Department to suppress voter turnout across the country.” Hence, Obama-Biden campaign chiefs are “amassing lawyers and gearing up to counter dirty tactics on election day.

Team Obama has “one of the largest legal teams ever assembled by a presidential campaign,” Alexander writes. “The main goal of the legal team, almost all of them volunteers, is to guarantee ballot security.

“‘The Obama campaign has learned the lessons of 2000 and 2004,’ a source claims. ‘On Election Day, lawyers will be everywhere — all the way down to the county level.’

“In Texas and other states, Obama officials are [also] preparing for the possibility that polls may be wildly off because of the so-called Bradley effect.

“‘The Obama officials are very cautious,’ says a source. ‘They want comfortable margins in place just in case. They are looking at three to six percentage points as a possible Bradley effect. Before they consider a state comfortable, they want it outside the polling margins. They think the Bradley effect could be as large as six — maybe even seven — percentage points, but they don’t really know.'”

Richard Dreyfuss told the ladies on The View that he played Dick Cheney in W. for “money.” Well, partly. The four things actors kick around before doing a film are (a) how many of the scenes are mainly about my character?, (b) how many lines and possible close-ups do I have?, (c) how much will I get paid? and (d) how good is the overall script and/or the director?

The question isn’t why Dreyfuss said that W. is “six-eighths of a great film.” The question is, why didn’t he say “three-quarters”?

Drefyuss also said that Oliver Stone is a little bit like Sean Hannity, explaining that “you can be a fascist, even when you’re on the left.” Show me a director who doesn’t believe that he/she is boss and that all opinions must finally be subjugated to his/her creative judgment, and I will show you a namby-pamby. John Ford once said that all strong directors are, to some extent, bastards.

If I had a Blu-ray player and a 50″ LCD or plasma flat-screen, I would be very, very cranked about the 1.27.09 Blu-ray release of the 162-minute director’s cut of David Fincher‘s Zodiac. I’ve never been so floored as I was by seeing a tip-top digital projection of this film at the big Paramount theatre on the lot. It’s basically a 1970s Gordon Willis film made for 21st Century gear-heads.

A group of New York press saw Milk last night,” a guy I know writes. “You could hear people tearing up in the end so I suppose Oscar season has officially begun. [It has] some great Gus Van Sant creative camerawork from the pre-Good Will Hunting days. An excellent cast. Josh Brolin and James Franco are quite good, the latter especially since he doesn’t have a lot to say or do but leaves his mark regardless. And yet no one really outshines Sean Penn‘s performance as Harvey Milk.”

Film Journal editor Kevin Lally has posted a report about last night’s appearance by Liv Ullmann at Manhattan’s Paley Center for Media. The legendary Norweigan actress, now 69, was there to bring attention to a rare screening of Richard Kaplan‘s 1977 documentary A Look at Liv. The doc (which I’ve never seen) includes “highlights from her career, interviews with Ullmann’s longtime director, friend and ally Ingmar Bergman and cinematographer Sven Nykvist, scenes of Ullman at premieres, book signings and relaxing with her young daughter, and candid conversations,” Lally describes.

“Kaplan, director of the Oscar-winning documentary The Eleanor Roosevelt Story, introduced the film, and then joined Ullmann, still radiant at the age of 69, on stage after the screening. Ullmann immediately disarmed the audience by telling them how embarrassing it was to watch all this footage of herself from 30 years ago, admitting that the woman on screen seemed like a different person.” 30 years ago? How about 48 years ago, which is when she co-starred in her first major film, Ung Flukt (a.k.a., The Wayward Girl)?

“In the film, Bergman — the father of her daughter Lin, now an acclaimed novelist — talks about how their romantic relationship evolved into something even more valuable to him, an enduring friendship. Ullmann, in turn, agreed that as one ages, friends are essential — and paid emotional tribute to a longtime close friend sitting in the front row, her Persona co-star Bibi Andersson.”

Today will end early due to the first media-elite screening of Gus Van Sant‘s Milk (concurrent with tonight’s benefit premiere in San Francisco at the Castro) at 3:30 this afternoon in Beverly Hills, followed by a 7 pm showing of Ron Howard‘s Frost/Nixon in West L.A. It’s cool to write about the latter but the Focus guys aren’t looking for Milk reactions just yet. There’s plenty of time.