Support on Patreon Follow @wellshwood
31 Comments
Not Entirely Her Idea

“I have to say I’m not that interested in making films any more,” Nicole Kidman has told a Telegraph interviewer. “I know I’m not meant to say that, but that’s where it is for me now.

“I’m 41 years old and very happy being in Tennessee with my baby and with my husband. I obviously have creative blood in me and it needs to come out in some way but I just don’t have that burning desire any more. I’m not saying I’m never going to work again, but I’m at peace with whatever happens, which is a nice place to be at this stage of my life.”

A.O. Scott‘s video essay about Brian Desmond Hurst‘s A Christmas Carol (’51) says everything I’ve always felt and believed about it. This British-produced adaptation of Charles Dickens‘ classic novel is by far (a) the most emotionally affecting, (b) the best acted, (c) the spookiest and (d) the most atmospherically correct of the lot. You can sense the mood and aroma of 19th Century London in every frame, line, garment and setting.

And no ghost in any other film has ever howled quite like Michael Hordern‘s Jacob Marley — here‘s the mp3.

In one of his most stinging pans, Variety‘s Todd McCarthy has shown himself to be no jellyfish when it comes to zapping Gabriele Muccino and Will Smith‘s Seven Pounds.

Calling the 12.19 Sony release “an endlessly sentimental fable” that “aims at the heart at the expense of the head,” being “unguided by rationality and intellect,” he says it’s considerably “off-putting for its manifest manipulations, as well as its pretentiousness and self-importance.”

He also bitch-slaps Smith for embracing his character’s “saintlike status…in a way so convincing that it proves disturbing as an indication of how highly this or any momentarily anointed superstar may regard himself.”

The film “offers either seductive emotional appeal or indigestible mawkishness, according to taste. Along the way, there are references to a fatal vehicular accident, suggestions of [Smith’s character’s] deceptiveness and inscrutable imagery of a jellyfish which, you may be sure, all factor crucially in the denouement.

“Whether one entirely rejects the project’s high-minded game-playing or falls right into the filmmakers’ quasi-spiritual trap and is thereby helplessly reduced to a jellyfish-like state at the end, it’s impossible to claim that Muccino and Nieporte lack the courage of their convictions, or faith in the moral value of their contrived little sacrificial fable.”

Who decides after 50 years of avoiding media attention that they want to jump into big-time politics as a U.S. Senator, a big-league, rough-and-tumble job that’s not for novices or the faint of heart, and has always demanded some basic fire-in the belly ambition? Caroline Kennedy just doesn’t strike me as the type.

She seems to have warmed to the idea of filling Hillary Clinton‘s Senate seat because she wants to do good things and help build a better future in the genteel climate of an Obama administration, but I think she lacks the necessary steel. Or so my character instinct tells me. Wanting to serve doesn’t mean zip if you don’t have the moxie and the social gregariousness and shrewd backroom moves that any tough operator needs. Plus she has a very dull speaking style.

Just today some press people asked about Kennedy’s qualifications and whatnot and she ducked into a black SUV because, according to this N.Y. Times story, her aides didn’t want her to talk. If Ms. Kennedy can’t get into a little tennis ball back-and-forth with the press about her ambition and background and whatnot, why in hell is she lobbying to be a U.S. Senator? No would-be legislators run from the press unless they’re facing indictment or some other kind of career-threatening situation.

In a post up today, Filmmaker‘s Nick Dawson asks Nothing But The Truth director-screenwriter Rod Lurie if he knew in advance that the film’s distributor, the Yari Film Group, was headed for Chapter 11 bankruptcy.

“I didn’t know,” Lurie responds. “I found out about 6pm [on December 12] and it was really, absolutely shocking. At this moment, I still haven’t spoken to Bob [Yari] and I’m sure he’s got incredibly important things to do. None of us really knows what it’s really going to mean, how it’s going to affect the film.

“Probably it will have it’s Academy [Awards] qualifying run and [then] there’s going to be a situation where it probably will have to get sold to another distributor. It’s rather stunning.

“This town is littered with the corpses of movies that got trapped in bankruptcies and companies that went under and we just want to do everything we can not to become one of those films. It’s very possible. I’m so proud of all the actors involved in this film, and I can’t believe that I’ve spent over a year working on nothing but this – my whole heart is in it – and then goodbye Charlie. But hopefully it will work itself out, because the Yari people are good people. They just got really trapped in really horrible economic vise.” 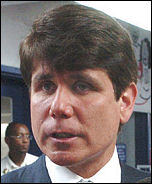 If I was a mother with an infant child and no marketable skills other than being attractive enough to attract powerful rich guys in their 50s and receiving $15 grand per month to live on, I would subsist on $6 grand per month and sock the rest away for a rainy day. In a year’s time I’d have over $100 grand in savings, and I could use this for investments if and when the gravy train stops.

“Hey, Kirk — We last said hello at the Ed Harris tribute dinner in Santa Barbara on 10.2. I’ll always remember our discussions on the Laredo set of Eddie Macon’s Run in ’82, which I visited for a N.Y Post piece, and especially your offering me a lift on a private jet back to Houston. Love that you have a Facebook thing going.” — posted on Kirk Douglas‘s Facebook page a few minutes ago. 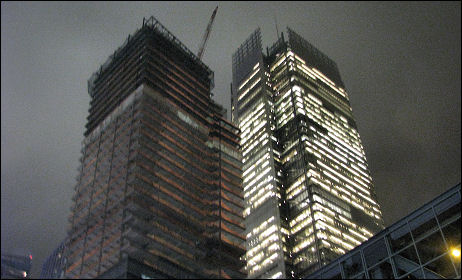 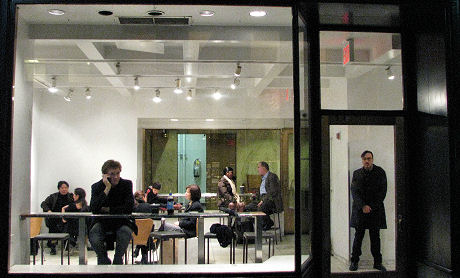 If Days of Heaven had never been made by Terrence Malick in the mid ’70s and come out instead as a brand-new film a month or so ago with Jake Gyllenhaal, say, in the Richard Gere role and Reese Witherspoon in the Brooke Adams part, it would be the hands-down Best Picture choice of every film critic and Academy member out there. It would be so far ahead of everything else it wouldn’t be funny.