There’s a Huffington Post story explaining Jeremy Piven‘s mercury-overload condition that led to his quitting the Broadway production of Speed-the-Plow and running home like a weenie. It turns out Piven brought this condition upon himself by compulsively eating too much sushi. 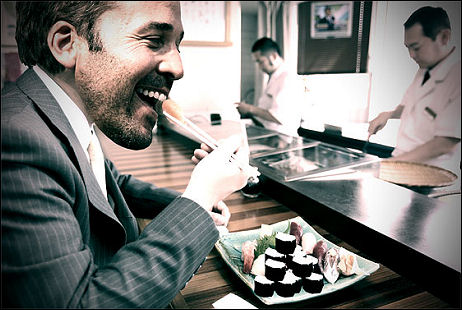 The statement from Piven’s rep says he doesn’t like it that everyone has been making fun of his ass over quitting the show due to the mercury thing. Trust me, Piven — the term “sushi defense” makes you seem like an even bigger baby and a bigger douche. 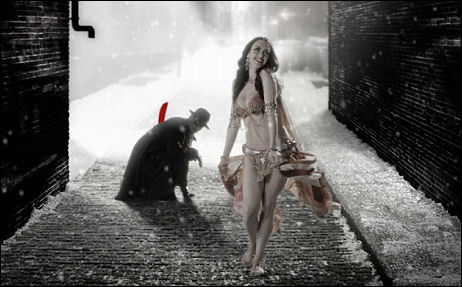 HuffPost’s John Aravosis has posted an allegedly leaked conversation (sic) between President-elect Barack Obama and Sen. Dianne Feinstein in which the president-elect decided to to choose conservative evangelical Christian leader Rick Warren to handle the invocation at Obama’s inaugural.

Yes, the piece notes — the same Rick Warren “who wants to ban all abortions, has compared gay marriage to pedophilia and incest, helped lead the fight for Prop. 8 in California, has said he agrees with far-right wingnut James Dobson on pretty much everything, and who’s devoted his entire life to destroying everything Obama stands for and believes in.”

Feinstein’s rationale to Obama, according to the transcript, is that the Warren decision will convey that he’s “so post-partisan that [he’s] willing to embrace and promote someone who loathes you, didn’t vote for you, and will do everything in his power to destroy your presidency. It’s like the Lieberman thing, but even bigger!”

To which Obama responds, “So you mean, by promoting a guy who represents none of my goals, ideals or hopes that the majority of the country voted for, and by devastating my own [pro-choice and gay] supporters on what was supposed to be a day of celebration and national rebirth, I’m actually promoting ‘change’ by publicly undermining it?”

I should have noted this earlier, but here’s to the Toronto Film Critics Association for ignoring the Zelig impulse, standing up like men of character and cojones and giving their Best Picture award to Kelly Reichardt‘s Wendy and Lucy. The two runnners-up were Rachel Getting Married and WALL*E.

What the hell is a “high mercury count“? Whatever it is, it reportedly caused Jeremy Piven to abruptly end his run in Broadway’s Speed-the-Plow after missing Tuesday evening’s performance and a Wednesday matinee. I thought this was a put-on after reading David Mamet‘s comment that he had spoken to Piven and was told “that he discovered that he had a very high level of mercury…so my understanding is that he is leaving show business to pursue a career as a thermometer.” This is the lamest cop-out excuse I’ve ever heard from any shirker in any profession in my entire life. It’s on the level of “my dog ate my homework.”

I don’t mean to single Florida out. I’m just saying they’re like all the other groups, that many film critics are Zelig-minded, that the Zelig impulse is just as prevalent among film critics groups as it is among institutional government types.

“Ideals are like the stars. We cannot reach them but we profit by their presence.” — a philosophy oft-spoken by John le Carre‘s father, Ronnie Cornwell.

The just-announced 15th Annual Screen Actors Guild Awards nominations contain at least two what-the-hells. Slumdog Millionaire‘s Dev Patel, a novice, is up for Best Supporting Actor while Revolutionary Road ‘s Michael Shannon has been ignored. (What is the blockage that people have about Shannon and this film? It’s unconscionable to blow off a performance this lightning-bolt vivid.) And Changeling‘s Angelina Jolie has been nominated for Best Actress for a strong if less-than-breathtaking performance, while the stunning achievement of I’ve Loved You So Long ‘s Kristin Scott Thomas has been given the go-by.

Two factors were behind the KST snub: xenophobia (i.e., “we gave the Best Actress Oscar to a French-speaking actress last year…that was enough”) and the super-celebrity, magazine-cover butt-kiss impulse benefitting Jolie. This is a very sad day for me personally as SAG, repping a very influential voting bloc, has now all but killed the likelihood of Oscar noms for Thomas and Shannon. Am I wrong?

HE approves of four of the Best Actor nominations — Richard Jenkins in The Visitor (justice! attempts by the Gurus of Gold to marginalize Jenkins have been waved off!), Frank Langella in Frost/Nixon, Sean Penn in Milk and Mickey Rourke in The Wrestler . But it’s wrong and slavish to nominate Benjamin Button‘s Brad Pitt — who gives a fine if unstirring performance as a passive sponge man — at the expense of the far more deserving Leonardo DiCaprio in Revolutionary Road or Benicio del Toro in Che. The Pitt nomination is largely driven by the celebrity butt-kiss impulse along with a Benjamin Button coat-tails effect.

In addition to Jolie, SAG’s Best Female Actor noms have gone to Rachel Getting Married ‘s Anne Hathaway (right), Frozen River‘s Melissa Leo (applause!), Doubt‘s Meryl Streep (yes), and Revolutionary Road‘s Kate Winslet (very much deserved). I for one am not distressed about Happy-Go-Lucky‘s Sally Hawkins getting bypassed. I’m presuming this happened because some of the SAG membership feels as I do about her performance — i.e., technically expert and emotonally alive, but in service of a horribly irritating character.

The arguments are (1) there’s no way in hell Adams’ Doubt performance, good as it is, is a match for The Wrestler‘s Marisa Tomei , I’ve Loved You So Long‘s Elsa Zylberstein, Rachel Getting Married‘s Rosemarie DeWitt, The Vistor‘s Hiam Abbass or Nothing But The Truth‘s Vera Farmiga; and (2) Winslet’s ex-Nazi-guard character is utterly central to the story of The Reader, and she’s unquestionably the lead female actress in the film so calling her a supporting player is pretty close to ridiculous.

On top of his other allegiances, The Day The Earth Stood Still director Scott Derrickson is an avowed Christian. Which has clouded his vision. Everyone agrees that Michael Rennie‘s Klaatu in the original 1951 film is a Christ-like figure (his adopted earth name is John Carpenter — i.e., J.C.) but how Derrickson sees Keanu Reeves‘ Klaatu in the same light is beyond me. For most of the film Reeves seems barely cognizant of moral or emotional distinctions in people, and he’s decided from the get-go to murder the human race in order to save the planet earth — an understandable thought from an earth-firster but hardly a Christ-like determination.

And speaking of entertainment industry professionals who demonstrate their allegiance one way but play a different tune when asked, Seven Pounds star Will Smith has told Fox 411 columnist Roger Friedman that he’s “not a Scientologist” but has told Access Hollywood that “the ideas of the Bible are 98 percent the same ideas of Scientology, 98 percent the same ideas of Hinduism and Buddhism.”

Yesterday Friedman reported that just-released tax returns for Smith’s charitable foundation “show that he and wife, Jada Pinkett Smith, gave $1.3 million in donations last year to a variety of religious, civic and arts groups,” but included in this package was “a combined $122,500 to the Church of Scientology, to wit: $67,500 to the New York Rescue Workers Detoxication Fund, $50,000 to the group’s Celebrity Center in Hollywood and $5,000 to ABLE, another Scientology offshoot.”

Friedman adds that Smith and his wife “have also supported a private school called New Village Academy they opened this fall in suburban Los Angeles that uses Scientology learning concepts.”