It’s 11:25 pm and the coverage of Michael Jackson‘s death on MSNBC is starting to drive me crazy. Tribute interviews with friends and colleagues, recaps, recollections, music videos, relentless references to the phenomenal record sales of Thriller, footage of the crowd outside the Apollo theatre, etc. And not a single word about why the poor man is dead at age 50.

I’m not talking about the diagnostic cause or an analysis about what amounts of which prescription drug (or drugs) may or may not have caused cardiac arrest. Nobody knows anything but we’ve all read today’s report and we all have our guesses and suspicions. We’ll be hearing the details soon enough.

What I’m wondering is why TV commentators won’t even obliquely allude to Jackson’s notoriously diseased lifestyle and behavior (particularly since the allegations of child molestation, which began in ’93, began to gradually collapse his career) and what I believe was surely a case of massive psychological anguish caused by his constant efforts to deny and obscure his sexual nature.

I’m asking because it seems fairly obvious to me that this anguish, deep down, is what killed Michael Jackson, and because the media are playing chickenshit games tonight in their efforts to avoid discussing this.

Jackson didn’t commit abrupt suicide but he almost certainly died from what he did to himself in increasing increments over the years. The reason he behaved and lived the way he did over the last 16 or so years and died the way he did today was due to the toxic effects of constant lying and denying about who and what he was. I believe in the end that his body and soul just couldn’t take it any more. The bullshit caught up with him.

The evidence has been clear for years that the man was a closeted pedophile, and that the elaborate games he played in order in order to conceal this aspect of his nature and misdirect the media and his millions of fans as much as possible led, I strongly suspect, to increasing spiritual stress and trauma. I’m obviously not pretending to know any of the particulars but Jackson, I believe, was surely driven mad by everything that he failed to deal with. Tell me I’m wrong.

Jeff is going into a screening of Public Enemies and has asked me to post his thoughts on the still-developing Michael Jackson story — Moises Chiullan.

CNN is finally going with the report by the LA Times, with TMZ having called it nearly an hour ago. As soon as it came from multiple sources that he wasn’t breathing when paramedics arrived, it was over. Who dies at age 50 if you’re fit and not Elvis Presley, or otherwise not a standard candidate for a heart attack?

Overheard just before Public Enemies screening at the Loews 84th St. today: “Peter Pan couldn’t grow old.” He would have been 51 years old on August 29th.

MTV, the cable network that owes their existence to Jackson, is only just now breaking into its regular promgramming with a Jackson tribute. This marks the first time in well over a decade that they have resembled the music video network they started out as.

A 6.24 Salon story, anonymously written, reported that “Tehran state television — Channel Two — is putting on a Lord of the Rings marathon,” as “part of a bigger push to keep [protestors] busy” — i.e., distracted. “Movie mad and immunized from international copyright laws, Iranians are normally treated to one or two Hollywood or European movie nights a week. Now it’s two or three films a day. The message is ‘Don’t Worry, Be Happy. Let’s watch, forget about what’s happened, never mind. Stop dwelling in the past. Look ahead.'”

28 Comments
Bay Did It

In an interview with CHUD’s Devin Faraci, Transformers: Revenge of the Fallen screenwriters Roberto Orci and Alex Kurtzman don’t dispute the rap about the Jar Jar Twins being racially offensive and basically say that if you’re looking for the go-to bad guy in this affair, go to director Michael Bay.

“It’s really hard for us to sit here and try to justify it,” one of them says. “I think that would be very foolish, and if someone wants to be offended by it, it’s their right. We were very surprised when we saw it, too, and it’s a choice that was made. If anything, it just shows you that we don’t control every aspect of the movie.

I shared an easy and friendly lunch an hour ago with Humpday costars Mark Duplass and Josh Leonard at an old-world Italian restaurant on Ninth Avenue. I’m going to wait until tomorrow morning to post the mp3, but these guys are very cool and sharp as a tack. I’ll say it again — Humpday (Magnolia, 7.10) is the best written, best acted mumblecore bromance flick of all time. 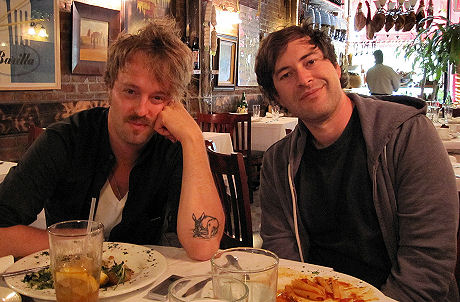 The LA-residing, married-with-daughter Duplass has wrapped a supporting performance in Noah Baumbach‘s Greenberg, among other acting gigs.. He and his brother Jay are now working on their latest co-directed film, which may or may not be called Don’t Fuck My Mom.

The Owen Wilson-ish Leonard (a.k.a., a smoother and more appealing version of Zach Galifianakis in Humpday) is directing a drama called Everything’s Alright (per the IMDB) and has acted (or is currently acting) in Hung, the forthcoming HBO series with Thomas Jane. Or so I heard him say.

Farrah Fawcett, 62, took off about two and a half hours ago, and I’m sorry. Nothing but stillness and serenity now, or so we’d like to think. I’ve long believed that a kind of singular consciousness stays with you as you leave the mortal coil, but that it merges with the grand cosmic altogether like a drop of water into a pool. We’re all going to get there, no exceptions. Live well and fully and cherish it all.

For both parties there’s an obvious element of self-destructive insanity in any extra-marital affair. The infidel is flirting with the possible destruction of his/her marriage, and, if he/she has a high-profile job, inviting possible harm to his/her reputation for the sin of indiscretion and the suspicion that he/she has an emotional screw loose. And the other man/woman will be emotionally wounded sooner or later, and made to feel like shit.

But having been there myself (i.e., I was the other guy in an off-and-on, two-and-a-half-year affair with a married journalist), I know that there’s no resisting the siren call if and when it gets inside you. Falling in love in the wrong way — illicitly — is always a troubling but mesmerizing experience, to put it mildly. You obviously know it’s not “right,” but dangerous affairs can make you feel intensely alive and vibrant, like you’re 19 years old and tasting God’s glorious nectar for the first time. You feel plugged into something extraordinary and magnificent, and you’ll say or do almost anything to keep it going, including jumping off a cliff without a parachute.

I don’t blame anyone, including Republican politicians, for succumbing to temptation and falling in love outside the bonds of propriety. The hypocrisy of Republicans who talk family values and then fool around with girlfriends in Las Vegas or Argentina is disgusting, of course, but airing private love letters online and on TV is disgusting also. Powerful politicians almost always fool around. It’s part of their makeup, and any woman who marries a politician and doesn’t realize that this kind of thing will most likely manifest sooner or later is flat-out delusional.

Why should any of us care about affairs if the politician is standing up for what he/she believes or doing what he/she promised to do for her constituents? Flying to Argentina on the taxpayers’ dime is ethically wrong, of course, but how corrupt is that, really, in the grand scheme of things? Has there ever been a politician who hasn’t used public funds for personal pleasure? Please.

Ten Best Picture nominees means that The Hurt Locker could actually make the cut — great! But Up needs to stay in its own Best Animated Feature slot — there’s nothing wrong with beautiful Mexico so Rio Grande crossings are unnecessary. And due respect to JJ Abrams‘ Star Trek but big-budget escapism by way of a GenX/GenY franchise reboot isn’t and shouldn’t be regarded as Best Picture material — it simply lacks the DNA. And anyone who would even flirt with the idea of Francis Coppola‘s Tetro being a possible Best Picture nominee (as David Poland did yesterday) needs to give his/her pet a flea bath, speed-walk a mile on the treadmill, do some yoga breathing exercises., etc.

Yesterday’s flight back to New York was for some reason less hellish than last week’s flight to Los Angeles. But all wifi-free coach flights are hell. First-class with wifi is the way to go, but only people like Nikki Finke can afford that. People like me just have to grim up and fly coach and hunker down. Back on Manhattan pavement by 9 pm. 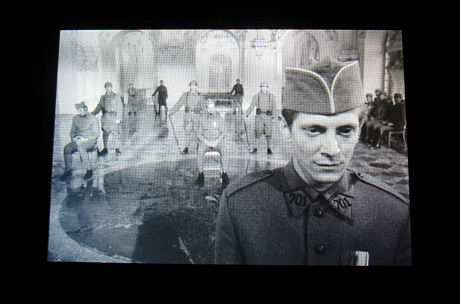 Watching Paths of Glory on my iPhone helped pass the time. Somewhat. The problem is that I’ve seen this 1957 Stanley Kubrick film so often that I’ve pretty much memorized the dialogue. “So you’re making me the goat! The only entirely innocent man in this whole affair! The man you stabbed in the back, George, was a soldier.”
June 25, 2009 6:35 amby Jeffrey Wells