Anyone who puts down Hot Tub Time Machine (MGM/UA, 3.26) as…whatever, unfunny or not funny enough or insubstantial or that it’s only for 35-and-overs is at least somewhat clueless. Or dead inside. I just came out of a HTTM screening at the AMC 34th Street, and this ridiculous/gimme-a-break/hellzapoppin’/gross/outrageous/brilliant time-space-continuum comedy played like a friggin’ riot. Well, as a very clever and funny piece for the first two-thirds and then like a riot during the last third — how’s that? 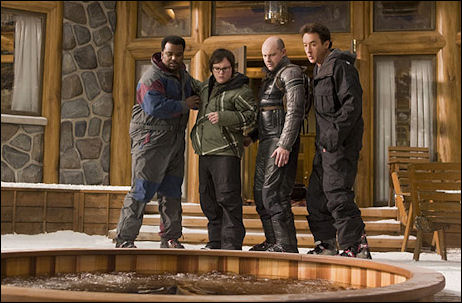 It’s Back to The Future with vomit and madness and Crispin Glover absurdity and nostalgic ’80s satire, and even a guy pretending to be Biff, that pudgy, obnoxious, one-expression dickhead in all three Back to the Future flicks. It’s Groundhog Day with black-guy semen splattered over its face. Well, not really semen but facial soap that looks like it. The “movies”, you know.

Hot Tub Time Machine is complete bullshit and sloppy as hell, but it takes you on an inventive, anarchic and clever-ass ride that makes you laugh, and then laugh more loudly, and then say to yourself, “Is this really happening? Is a straight guy really being forced to blow his straight friend in front of a crowd of hooting maniacs?”

The director is Steve Pink — heretofore to be recognized as the kind of sick madman that Hollywood youth comedies need and must have. The screenwriters are Josh Heald, Sean Anders and John Morris, working from a story by Heald.

God bless the sensibility of producer-star John Cusack for bringing this truly sick, in-and-out hilarious and philosophically reprehensible comedy to the big screen. Cusack is a hoot in this thing, as you might expect, but the real breakout is Rob Corddry, who plays the wild-card wildass in the group of four (Cusack, Corddry, Craig Robinson, Clark Duke ) who visit a broken down ski resort and travel back to their youth in the mid ’80s and…don’t ask.

It’s all too crazy and sick to recount, but it has a philosophical point, which is that your fate and your future are not set in stone, and that you only have to man up, throw the dice and change what you don’t like.

Everyone behind and in front of the camera was almost certainly on mescaline when it was written and made, and I know that I have to see it again soon, and at a theatre that doesn’t muffle the fucking sound like those ayeholes at the AMC 34th Street did tonight.

Will Hot Tub Time Machine make as much money as The Hangover? Maybe, maybe not…but I know one thing — this movie is smart and nuts and anarchic in a way that redefines the term. It’s my idea of what truly insane, throw-it-out-the-window, fuck-all smartass comedy should ideally be and feel like.

It’s better than The Hangover — funnier, sicker, more insane but also with a much trippier and crazier script. It looks like some grubby New Line comedy from 1992, but the pace is relentless and it gets funnier and funnier and funnier. Stupidly, okay, but accelerated with a seriously brainy bent.

The people saying that Hot Tub Time Machine was made especially for Gen-Xers and others who remember the ’80s are…okay, maybe half-right. But any age group should (and I think will) be able to recognize true batshit insanity when they see it.

It’s the first daylight-savings business day of 2010, and the air smells clean and fresh and the sun is still shining at 6:20 pm. Spring is here and the mucky, gloppy weather is, I’m hoping, over for the most part. Update/Correction: This was actually the second daylight-savings business day of 2010, but it was the first day in which I really felt it — the air, the light, the warmth and the whole renewal thing. I live indoors and online for the most part. It takes me longer to wake up to the symphony au natural.

I haven’t yet seen Hot Tub Time Machine — an hour to go — but I may have done it a disservice by asking if it had the horses to become this year’s The Hangover. Inflating expectations doesn’t help anyone. I’ve had this notion in my head, you see, and then Jett said all his Syracuse homies were totally down for it. And so I flew by the seat of this intuition and went for it and wrote “could this happen?”. Maybe it’ll only open to $20 million, or maybe a tad less — who knows?

Everyone knows there’s no such thing as mascara-wearing Jack Sparrow-type guys operating as 2010 pirates, right? My understanding is that they’re all scurvy scumbags. Which is why I’d love to see a movie about a crew of skilled, hard-core, well-funded mercenaries who roam the seven seas on a sailboat, looking for these bastard pricks. The idea would be to pretend to be easy marks (i.e., scared tourists, know-nothing nouveau riche) so as to encourage pirate attacks, and then when the pirates come aboard they fake ’em out and shoot ’em down like dogs. I would absolutely pay to see this. If not as a feature film then as reality series. What authorities would say “no, you can’t do that — pirates have rights and the Bible says ‘thou shalt not kill'”?

I guess you could describe Movie Review Intelligence as a slightly more accessible, less nerdy-buffy movie-review casserole site for people with short attention spans who…what, find Rotten Tomatoes and Metacritic too challenging? The “we don’t like sifting through ratings or numbers” crowd. The titles and numbers are nice and orderly and easy to get a fix on — I’ll check it out regularly — but MRI’s one-word characterization summaries are too generous, I think.

She’s Out of My League averaged 51.4% positive and they call that “moderate.” I call that a failing grade because it’s actually lower, of course, because the 51.4% has been propped up by easy-lay go-along critics who look for ways to be nice or kind to crap-level mainstream studio comedies. MRI is calling the 65.7% positive response to Green Zone “good.” I’m sorry but a 65% rating is moderate at best. “Good” is 70% to 75%. This suggests they’re not that tough either when it comes to assigning a number grade to a review. What’s the science behind that exactly?

Avatar will be released on DVD/Bluray on Thursday, 4.22 — i.e., the 40th anniversary of Earth Day — and Fox Home Video doesn’t have cover art yet? It’ll be in stores in 34 days! If the Digital Bits, Bluray.com and Amazon.com don’t have it, nobody does. I foresee at least a triple-dip on this title — initial release, longer director’s cut, and 3D Bluray/DVD in ’11 or ’12.

IFC.com’s Stephen Saito has posted a non-reviewing review of James Franco‘s Saturday Night, which screened yesterday at South by Southwest. Pure observation/description, and not a whit of evaluation or judgment. I begged Franco’s reps a couple of weeks ago to let me watch a screener so I could review the doc concurrently with SxSW, but they couldn’t be bothered. Thanks, guys.

Indiewire‘s Eric Kohn manned up and actually reviewed the sucker, calling it “a compelling look at anachronistic media in action.” (That means the film has an issue or two, but is fairly good/satisfying overall.) HE’s Moises Chiullan says (a) “I could feel others near me shift in their seats after around the halfway point,” (b) “Things start to drag a bit in the last third” — does that mean a bit more than the halfway point problems? –and yet (c) “those who showed up because Franco’s name was attached or out of their love of the current cast (Bill Hader in particular) got plenty of what they were expecting.”

More dentistry happens today, hence the lack of activity. Somewhat less costly New Jersey dentistry, but then you need to add the rent-a-car fee plus gas. But it’s still cheaper. I’m one of the millions out there who don’t have dental insurance. And yet things are looking up — a screening of Hot Tub Time Machine this evening!