Here’s an alleged link to a new Inception trailer. The wifi is awfully weak up here in Glenn Beck country (45 minutes north of Scranton) so I haven’t been able to watch it. I’m writing this in a truck-stop diner. Three large-bellied T-shirt guys are eating at the counter, Fox News is on the tube, and three friendly waitresses (two in their 50s, one jail-bait-aged) are keeping everyone happy. Two cooks in the kitchen, eight gas pumps outside, showers for rent.

Both these guys should retreat a bit so their faces don’t look so…I don’t know what the word is. Invasive? Intimidating? Not so much Anthony Breznican (l.), the USA Today guy who doesn’t like The Conspirator sight unseen, as MCN’s David Poland (r.), who could almost be the Cloverfield giant — he also looks a little squinty. The unseen baby (i.e., Poland’s son Cameron) saves it.

Are there any other summer films besides Chris Nolan‘s Inception and James Mangold‘s Day and Knight that anyone is genuinely looking forward to? People should be looking forward to The Tillman Story (due in August) but as I said last week, there are many people out there who’d rather be shot and thrown into a muddy pit rather than watch a great documentary.

I take that back about Day and Knight. I’m not eagerly awaiting that Tom Cruise-Cameron Diaz action-comedy, although I am sensing I’ll be able to more than tolerate it, or in other words be more or less down with it, which is more than one can reasonably or realistically expect from most of the summer films. I mean, it’s horrific when you review the list.

I agree, in short, with most of what Marshall Fine says in this bitch-and-moan piece, but why does he not even mention Inception — the one summer flick that all the good folks want to see, and which might actually be more than decent? 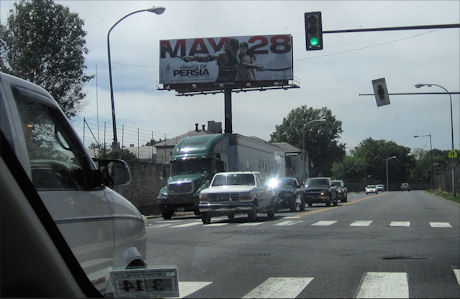 I’m imagining being a 14 year-old kid without a bike or a skateboard, and kicking around in this grubby Pennnsylvania neighborhood with nihilistic thoughts running around my head, and then I look up and see that Prince of Persia billboard. “Wait…who dat long-haired homie cat?,” I might say to myself. “Don’t matter, I guess. I can tell right off the bat this movie isn’t going to save my life. I mean, that much I know.” 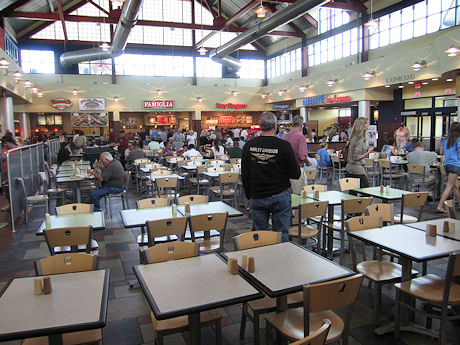 It was inevitable, of course, that when I raised my camera to take a shot that someone would stop in their tracks and wait until I’d snapped it. Sure enough, a very polite woman in a red T-shirt stopped and waited while I took this. I explained a week ago that I hate it when people do this, and that shots are sometimes (frequently?) better if someone walks into the frame while you’re taking a shot. There’s no winning, of course. People are going to polite me to death in this particular fashion for the rest of my life.
May 7, 2010 12:02 pmby Jeffrey Wells
10 Comments
Does It Have Teeth?

My final, final dental appointment in New Jersey happens this morning so I’ll be out of commission for a few hours. I then have to drive to Syracuse to pick up some of Jett’s stuff (he graduates a week hence) and haul it back to a storage facility in Newark. But as long as we’re on the subject…

The above is Jett’s debut entry as a regular contributor to the Huffington Post‘s College page — a video essay about Syracuse U. resistance to JP Morgan Chase CEO Jamie Dimon recent engagement as the 2010 graduation commencement speaker.

“You can add Dennis Quaid to the actors who have successfully gone through the cauldron of playing real U.S. presidents,” says an industry friend who’s seen Richard Loncraine‘s The Special Relationship (HBO, 5.29), which deals with the relationship between President Bill Clinton (Quaid) and British Prime Minister Tony Blair (Michael Sheen, in his third go-round with the character).

“Quaid’s Clinton is certainly one for the ages,” the guy says. “He has everything down perfectly — the look, the accent, the demeanor, even the walk. It’s a real treasure of a performance. What’s surprising about A Special Relationship — for me anyway — is that it doesn’t hit its stride when focusing on his friendship with Blair. Instead, the film finds all its humanity and raison d’etre in watching a marriage pathetically deflate.” Bill and Hillary’s, I presume he means.

The Special Relationship “is an American/British political film directed by Loncraine from a screenplay by Peter Morgan,” says the Wiki profile. “It’s the third film in Morgan’s informal Blair trilogy, which dramatizes the political career of Prime Minister of the United Kingdom Tony Blair (1997-2007), following The Deal (2003) and The Queen (2006), both directed by Stephen Frears.

“The first drafts of The Special Relationship dealt with Blair’s working relationships with Presidents of the United States Bill Clinton (1993-2001) and George W. Bush (2001-2009). But Morgan excised the Bush scenes from subsequent drafts because he found the Blair/Clinton dynamic more interesting. He intended to make his directorial debut with the film but backed out a month before filming began and was replaced by Loncraine. The film is produced by Rainmark Films and backed by HBO Films and BBC Films.

The film also stars Hope Davis as Hillary Rodham Clinton, and Helen McCrory as Cherie Blair. Principal photography on locations in and around London, England ran from July 20 to September 4, 2009. The film will be broadcast on HBO in the United States on May 29, 2010. Optimum Releasing will distribute it in cinemas in the United Kingdom; the company website lists a release date of May 7, 2010.”

In a just-posted Boxoffice Magazine piece called “Can Theatres — And Studios — Survive Without Critics?,” Pete Hammond disputes the conventional wisdom that film critics are toast. 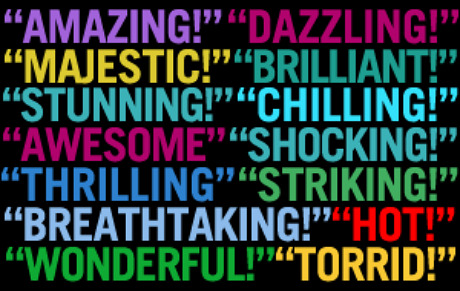 He begins by quoting from A.O. Scott‘s fare-thee-well essay that ran in the 3.31 N.Y. Times, to wit: “Maybe criticism mattered once, but the conventional wisdom insists that it doesn’t anymore,” Scott wrote. “There used to be James Agee, and now there is Rotten Tomatoes. [And] rotten movies routinely make huge sums of money in spite of the demurral of critics.

“Where once reasoned debate and knowledgeable evaluation flourished, there are now social networking and marketing algorithms and a nattering gaggle of bloggers.”

No argument, says Hammond. “But then why does every major and minor (i.e. indie) release rely so heavily on critics’ opinions? Just look at the ads: print, internet, TV, radio, billboards, DVDs. The studios have scoured reviews from the biggest papers to the tiniest websites to flaunt whatever compliments are fit to print, even if just a single adjective: ‘Brilliant!’ Reviews aren’t just being read — they’re being parsed.

“‘If critics are irrelevant, then why is every movie ad without exception based on critics’ quotes?’ asks veteran film critic and historian Leonard Maltin (who also publishes a thriving annual movie guide of reviews). ‘And it doesn’t matter who the critics are. They will quote anybody, [and yet] the advertising premise seems to be that you can’t persuade people to go to a movie without quoting someone recommending it.”

“Maltin says the practice is so pervasive that when an ad or a DVD box doesn’t include a quote, he’s immediately suspicious that the movie must really be a dog.”

It’s a persuasive and impassioned article, but it ends with a tart comment from Box-Office reader Steve Simels: “Film criticism isn’t dead, but film criticism as a job where you also get health insurance coverage clearly is.”

This appears to be an apparently legit pirate-capturing of JJ Abrams‘ much-discussed Super 8 teaser. It’s attached to Iron Man 2 in theatres starting this morning so I don’t see the problem in leaking it. It’s now officially a “people’s teaser.” The guy who captured this and put it up on You Tube last night deserves an “attaboy.”

So much for that Vulture report that it’s about kids shooting a super-8 movie in the ’70s, eh? That idea sounded so Steven Spielberg-ish I was ready to dismiss it out of hand. Be very, very afraid of the hand of Spielberg (who’s producing the Abrams-directed Super 8) as his influence will always ring some kind of familiar Spielbergian bell.

This is obviously a superior piece (as was the much-hyped teaser for Cloverfield) and does what a good enticing teaser is supposed to do, etc. But boil it all down and it’s the opening of The Fugitive with a creaure escaping from a derailed train rather than Richard Kimble.

I have an idea for another Abrams-Spielberg collaboration. It’s called Stovepipe. The rotting skeletal remnants of Abraham Lincoln digs and claws its way out of the 16th President’s tomb in Springfield, Illinois, and begins to slowly make its way across the country in order to find Spielberg, etc.