Support on Patreon Follow @wellshwood
9 Comments
Outside The Law

Update: Lindsay Lohan was released from jail around 1:35 am this morning, so the following comments from Merle Haggard about how she ought to deal with other inmates is moot.

Spitznagel: You know who could use some jail house pointers from you? Lindsay Lohan.

Haggard: I feel sorry for her because she’s such a lovely creature and such a talented person, and she’s also a spoiled brat. I don’t know if they’ve put her in with the rest of the inmates. I doubt that they would, but if it happens, she may have to fight her way out of a couple things.

Spitznagel: So your advice to Lindsay is, be prepared to brawl?

Haggard: She has to be honest, and she has to let the other prisoners know that she doesn’t feel like she’s any better than they are.

Spitznagel: That could be a problem.

Haggard: Well, they’ll change her mind about that. (Laughs.) When I was in San Quentin, I paid attention the whole time I was there and I made sure I didn’t borrow anything from anybody. If I told somebody I was going to meet them on a Tuesday, I met ’em. I learned that it’s better to be honest, because you can’t get away from your lie.

Spitznagel: It’s not like you just hide out at the Chateau Marmont and wait for everything to blow over.

Haggard: It won’t blow over. (Laughs.) It will blow you over.

Peter Belsito of Filmfinders, Inc. put this up on Facebook recently, having watched it via Jonathan Taplin. “The greatest three minutes of George Carlin‘s career, and I think the final three minutes of his career. The PTB are aggressively trying to keep this video off YouTube and Google, so I thought I’d upload it so it can’t get deleted as easily. Everyone needs to watch this!”

Although the Weinstein Co.’s The King’s Speech is its most visible Best Picture Oscar candidate, the company has an alternate “stealth” contender for the same award, says The Envelope‘s Tom O’Neil. It’s The Concert, a French-language drama about a conductor of the Bolshoi orchestra who was fired 30 years ago for hiring Jewish musicians, and is now plotting to even the score.

The narrator of this trailer is impossible, if I may say. The tone is so pandering, the copy so cloying. Inglourious Basterds‘ Melanie Laurent costars as a precocious violinist. Pic opened 7.30 in New York and Los Angeles.

I’ve seen Blake Edwards‘ Breakfast at Tiffany’s exactly once, but the film — or the image, rather, of Audrey Hepburn‘s Holly Golightly with the black evening grown, upswept hair and long cigarette holder — has an iconic status. And like everyone else, I’ve always thought of Hepburn/Golightly as some kind of flighty gold-digger type. But no, says N.Y. Times columnist Maureen Dowd in today’s column. Holly is a whore. 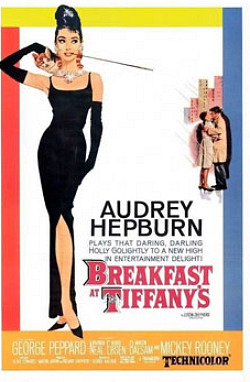 When the producers of Breakfast at Tiffany’s chose Hepburn to play Golightly, “her real-life good-girl persona helped mask the raciness of her character.

“In the 1960 movie of John O’Hara‘s Butterfield 8, Elizabeth Taylor‘s call girl had to die in a car crash for her sins, just as 20 years earlier, Vivien Leigh, playing a ballerina-turned-prostitute in Waterloo Bridge, had to be punished for her wicked ways with a final leap off the bridge.

“It would be many years before audiences would embrace overt hookers as heroines: Jamie Lee Curtis in Trading Places in 1983, Julia Roberts in Pretty Woman in 1990 and Kim Basinger in L.A. Confidential in 1997.

“Married to the oppressive Mel Ferrer and with a new baby boy, Hepburn’s princess-swan image bled into Holly, making her seem less like a member of the oldest profession and more like a modern, fun-loving single girl.

“‘In Breakfast at Tiffany’s, all of a sudden — because it was Audrey who was doing it — living alone, going out, looking fabulous and getting a little drunk didn’t look so bad anymore,’ writes Sam Wasson in his new book Fifth Avenue, 5 am: Audrey Hepburn, ‘Breakfast at Tiffany’s’ and the Dawn of the Modern Woman. ‘Being single actually seemed shame-free. It seemed fun.’

“So, as a haute hooker, Hepburn was a fairy godmother, not only to feminism but to the prevailing ethos that style and cool trump all.”

Update: Despite Dinner for Schmucks having edged out Inception on Friday, the final weekend figures have Chris Nolan ‘s dreamstate epic taking the weekend crown. Inception‘s three-day tally is expected to be $27.1 million, a drop of 37% from last weekend, for a cume of $192.9 million. The second-place Schmucks will end up with $23 million. Salt, down 47% from last weekend, is third with $19,250,000.

Earlier: A little voice was telling me on Friday morning that Dinner for Schmucks might nudge ahead of Inception and take the weekend crown. It did manage this on Friday, earning $8,400,000 to Inception‘s $8,150,000, but final weekend projections have yet to emerge. (It’s 10:25 am Sunday morning and box-office reporting sites still haven’t coughed up Saturday figures.)

Carl DiOrio‘s Hollywood Reporter “Box Office Tally” forecast guessed that Cats & Dogs: The Revenge of Kitty Galore would “do just well enough” to be #1. In actually it appears likely to end up in fifth place with $12.5 million.