In an 8.18 Indiewire dispatch, columnist Todd McCarthy, who’s serving on the New York Film Festival selection committee, writes that “it now seems clear” that Terrence Malick‘s endlessly delayed The Tree of Life “will not be opening this year. I can’t prove it, of course, and he’s supposedly set to start shooting a new film in Oklahoma in October, but I’m convinced we won’t be seeing The Tree of Life until, at the earliest, the 2011 Cannes Film Festival. Or perhaps it could turn up at the New York Film Festival a year from now.” What?

What’s wrong with this trailer? It agitates. It’s strident. It gives me a slight headache. Odd sounds and curious music keeps popping in and out. And the narrator is awful. It doesn’t seem to represent the film I saw in Cannes. Somebody has to fix this, and fast.

People I respect and admire are telling me that LexG is over-ranting and dominating each thread he takes part in, and that they’re getting tired of it and thinking about bailing on HE because of this. Is this a fringe feeling that I’ve giving too much thought to, or should I be concerned? I want the best and brightest people to hang here. I don’t want HE to become some downmarket forum for primitive expressions, and…well, my head is spinning. I really don’t know what to say or do.

LexG is exceptionally bright and knows about writing straight from the soul without parsing, and he writes entertainingly, although I’ve told him I don’t to read any more comments about hormonal reactions to this or that actress, or comments about their feet or anything along those vaguely icky lines. But his personality is very strong and elbowy, and he does tend to bellow at people. I really don’t know what to do or think. I don’t mind his rants, but I would mind if too many people didn’t return here because of them. Is this the case?

Could I ask for a show of hands? Whither LexG? And what can I do to make HE more open-minded, more engaging, and less belligerent? Glenn Kenny has become a bit of a piss-head and may not be long for this site, but I really don’t want to lose guys like Chris Willman, et. al.

That’s what Jeff Bridges looks like with a beard and a cowboy hat, you bet. His beard is a little whiter than it was in Crazy Heart, and it wasn’t white at all, of course, in The Big Lebowski so time moves on, etc. What this pic tells me primarily is that Bridges isn’t going to register all that strongly as Rooster Cogburn. He has only so many tricks up his sleeve, after all. He can only repeat well-worn schtick. But Hailee Steinfeld, you can tell, has some kind of snarly polecat, don’t-mess-with-me attitude. 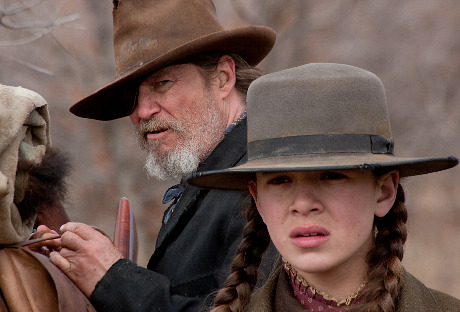 I used to have this thing going when I was, like, “oooh, I’m Anna Paquin, the choosy and very cool indie actress”? The Piano, Jane Eyre, Hurlyburly, Buffalo Soldiers, 25th Hour…right? And then…I don’t know what happened. But I love being naked and bloody and my own person and part of a hot HBO show that idiots think is really sexy and cool. And I’m being really well paid so…you know, what am I doing wrong? Wait — am I doing something wrong? 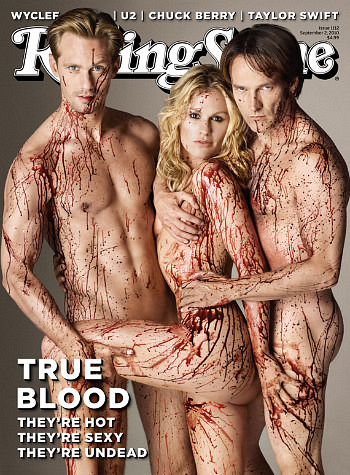 If I could slaughter each and every vampire movie and cable TV series with single stroke of a terrible swift sword, I would do so immediately.

The trailer for John Curran‘s Stone (Overture, 10.8) makes it seem like a more-or-less conventional crime melodrama. In the midst of evaluating an apparently psychopathic convict (Edward Norton) regarding an upcoming parole hearing, a retirement-age prison counselor (Robert De Niro) succumbs to sexual favors offered by the prisoner’s scheming wife (Milla Jovovich). We all know where this is likely to go. Exposure, revenge, moral ruin, chaos.

Guess what? It goes somewhere else entirely. And I mean into a realm that, for me, is not far from the one that Robert Bresson mined in the ’50s and ’60s and early ’70s.

Update: This isn’t a “review” of Stone. The request was to hold off until it plays the Toronto Film Festival, but I called Overture publicity this morning and said “you have to relent a bit and let me say a little something.” So I ran something — a nice piece that didn’t review Stone as much as talk about certain unusual or distinctive aspects of it.

But certain reviewers have complained since the piece went up. I wasn’t told what they said but I can guess.

I’ve never in my life acted like a two-year-old when another critic ran an early impression of an upcoming film. My response has always been “gee, that sounds good, can’t wait to see it.” I recognize that sometimes a writer will riff early on this or that aspect of a film that he/she has seen and liked. It certainly happens enough. But others feel the need to be contentious. They open their mouths and out comes “waahhhh!” So I’ve taken my piece down.

I need to once more register outrage at the rape of Alfred Hitchcock‘s Psycho on the just-out British Bluray (and the forthcoming U.S. version). Because no one, it seems, is mentioning or agreeing with what I said two months ago, which was that two aspect-ratio versions should have been included in the Bluray package. 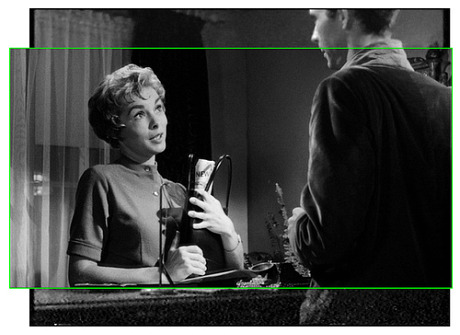 It should offer the top-and-bottom-cropped 1.78:1 version and the 1.37:1 version that everyone, his sister and his brother-in-law saw in many theatres in 1960, and then on broadcast TV, VHS and laser disc for decades hence. Because the latter is the true-blue version that everyone should see. I feel like I’m going nuts as the only one on the planet taking pains to point this out.

No one is faulting the Universal Home Video guys for cropping the original version to conform to the 1.78:1 aspect ratio of plasma/LCD screens, but their failure to offer a concurrent 1.37:1 version is a case of visual vandalism, pure and simple. Alfred Hitchcock protected his 1960 classic so it could be shown in theatres and on TV with a 1.37 to 1 aspect ratio. Some theatres back then were using 1.37:1 or 1.66:1 aperture plates, but the Psycho norm was never intended to be 1.78 to 1. It was screened at this aspect ratio here and there and, okay, yes, it’s a tolerable a.r. if you want to watch Psycho this way, but it’s not the desired one. Anyone who claims otherwise either can’t “see” this or refuses to.

I recognize that 1.85 aperture plates had begun to be used by projectionists in the mid to late ’50s, but for the most part Hitchcock expected his film to be shown within ratios of 1.37:1 (next door to a perfect box) or 1.66 to 1 (moderate rectangle) because he knew that (a) 1.37 or 1.66:1 aperture plates were also in use and (b) he knew or certainly suspected that down the road most people would see Psycho on TV. 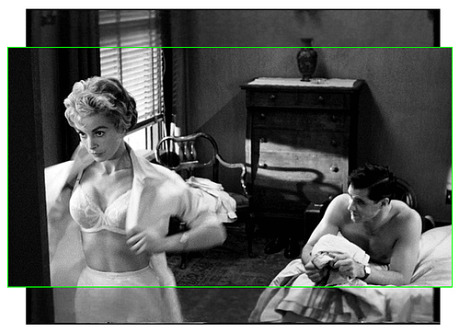 It is a stone fact that Psycho was shot to look best with a 1.37:1 aspect ratio — it’s obvious when you compare the versions.

And people who claim otherwise are either delusional or dishonest. They know the truth of it (and can see the obvious proofs in the 1.37 vs. 1.78 aspect ratio comparisons I posted on 6.11) but will nonetheless take a sip of coffee, put on their best earnest expression and say, “No, that’s not the case — Psycho was meant to be seen in a 1.78 aspect ratio.”

If I was U.S. emperor these people would be hunted down and prosecuted. I’m serious — I would literally press charges and seek fines and jail terms. What they’ve done — I’m not exaggerating — is precisely the same thing as taking a razor blade and slicing off the tops and bottoms of Leonardo da Vinci’s “Mona Lisa” in the Louvre.

Think of it! Future generations may never see Psycho in the aspect ratio that it was shot in and meant to be seen in and clearly looks best in (1.37 to 1 framing offers breathing-space grace notes throughout the film). History is being made as well as censored, and all because of the high-def aspect ratio mandate of the times and the laissez-faire greed of Universal Home Video executives. (And I don’t mean Universal archivist/preservationist Bob O’Neil — he just handles the elements, doesn’t oversee home video.) Shame on these scoundrels.

Again, I explained the whole thing in a 6.11 posting called “They Won’t Forget.” 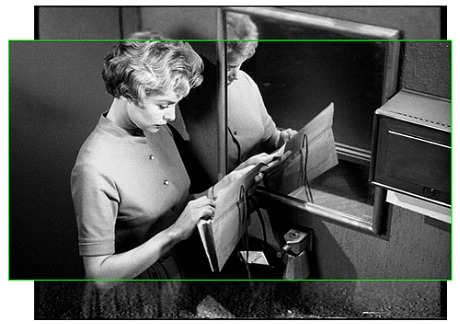 Two newscasters playing themselves and no characters, no dialogue, no hint of any kind of a story? Just a basic situational set-up with repetitive CG effects? Forget it.