I’ve watched this Somewhere clip three times now, and all I’m getting from it is one thing — the brunette isn’t especially taken with Stephen Dorff, her costar. They have a history and she’s over it. And everyone in the room is pretending to ignore this. And yet Dorff, for some reason, seems surprised. Which doesn’t figure. No guy is ever surprised by a woman’s disdain. He always senses it before it’s expressed, usually shrugs it off, projects “whatever.”

And by the way, I’m not seeing Somewhere (Focus Features, 12.22) on the list for the Toronto Film Festival. Why would Somewhere play Venice — journalists and critics galore — but not Toronto? If you’re going to be reviewed and talked about in Italy, what’s the advantage in ducking Phase Two (or Phase Three, if you’re counting Telluride)? This obviously sends a signal that Coppola and/or Focus Features are…well, concerned about something. Or that she and Focus are sensing on some level that Somewhere will get a friendlier reception in Venice.

When was the last time that a film by a major-league director bypassed Toronto after going to Venice? There are precedents, I’m assuming.

I have a feeling (and no more than that) that I’m not going to be all that wild about seeing Mark Romanek‘s Never Let Me Go a second time. Because, as the Wiki page for Kazuo Ishiguro‘s book makes clear, once the layers have been peeled back and the situation is laid bare, it becomes a piece, essentially, about resignation and doom.

Not so, says a friend who’s seen it. There’s more to it than what has been summarized in this or that forum. It’s not some kind of “aha!” giveaway that comes at the end of the third act.

“If the film is difficult for some people, it’s not because of the movie’s quality, but simply because it deals with issues that most people are uncomfortable with,” he says. “The performances are all fine. And the direction is subtle. It has a modesty. It’s all handled with humanity. The point isn’t to wallow in their tragedy, but to relate their experiences to our own. If you understand that, the film slowly builds its power as it progresses.”

On the Amazon.com page for the upcoming Apocalypse Now Bluray “Full Disclosure” edition (which I clicked on from the Bluray’s official website), it is stated that the package includes (and this is a direct copy/paste) (a) “Hearts of Darkness — Eleanor Coppola‘s documentary on the making of Apocalypse Now” and (b) “Hearts of Darkness audio commentary with Eleanor and Francis Ford Coppola.”

The first statement is a baldfaced lie. Hearts of Darkness was co-directed by George Hickenlooper and Fax Bahr with footage and audio tapes supplied by Eleanor Coppola, who had nothing to do with the interviews done for the doc and little to do with the cutting of it. This may be an Amazon error or (don’t want to leap to conclusions) deliberate misinformation forwarded by Lionsgate, Paramount Home Video and/or Zoetrope, but HE readers are referred to a piece I wrote this morning about a related Hearts of Darkness issue.

A Hollywood Reporter story by Stephen Galloway announced yesterday that Academy reps can’t find Jean Luc Godard in order to give him the good news that he’s been chosen to receive an honorary Oscar next February. And so Movieline‘s Stu Van Airsdale has created a Jean-Luc Godard “‘missing” poster. Hilarious. I’m guessing Godard is just ducking them — he doesn’t want the damn award and doesn’t want to get into a whole dialogue dispute and have to listen to endless cajolings. 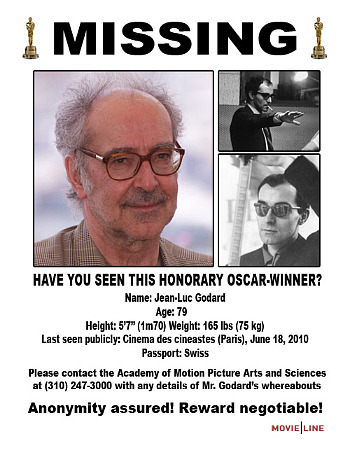 On 8.24 Slate‘s Bill Engvell took another look at the 3D revenue situation. A somewhat harsher view, that is, than the one presented by TheWrap‘s Daniel Frankel on 7.20, which basically said that 3D revenues are going south. Actually, says Engvell, “It looks to me that the revival is even worse off than we thought. Not only has the profitability of 3-D fallen in the past few months; it’s in a slide that goes back years.”

The posting of this just-released Apocalypse Now Bluray trailer affords an opportunity to bitch about a clear lack of interest on the part of Francis Coppola‘s Zoetrope as well as Paramount Home Video (which sub-licensed the AN elements to Lionsgate for the Bluray) in presenting George Hickenlooper and Fax Bahr‘s Hearts of Darkness, an award-winning 1991 documentary about the making of Apocalypse Now, in a respectful fashion within the three-disc AN “Full Disclosure” package.

It’s great that HOD is being included, mind, but it’s not going to look all that terrific, apparently, because it appears — emphasis on that word — that Paramount Home Video provided the same one-inch tape master that was used for the 2007 DVD, which looked so-so at best but could have looked better if the HOD negative had been digitally scanned.

It’s allegedly stated on the Apocalypse Now Bluray website that “original elements” were used in creating an HD master of Hearts of Darkness. The wording of this term seems needlessly vague and is probably misleading. I haven’t been able to persuade anyone from Lionsgate, American Zoetrope or Paramount Home Video to be more specific.

It makes basic visual sense to use higher-grade elements for a Bluray rendering, but apparently nobody wanted to spend the $10 grand (more?) it would have cost to scan the HOD negative. This is understandable from a nickel-and-dime perspective, but disrespectful to perhaps the best making-of documentary ever made. It is certainly the most intimate look at the travails of an anguished big-budget filmmaker ever seen. What’s right is right. Hearts of Darkness isn’t an EPK reel — it’s a highly revered film with its own legend.

It’s already been discussed how Paramount and/or Lionsgate had no interest in including a commentary track from Hickenlooper/Bahr on the HOD Bluray. Hickenlooper told me this morning he’s planning to record a commentary but lacks the geek expertise to do it correctly himself. If anyone in Los Angeles can lend a hand (i.e., provide a recording opportunity, edit the commentary, upload the master), please get in touch.

Late last month I spent too many hours emailing and calling people at Zoetrope, Lionsgate and Paramount Home Video to ask about if better HOD materials had been used for the Bluray, or not. I got totally stonewalled and shilly-shallied by everyone I wrote and spoke to. To this day nobody has ever confirmed or denied that the one-inch tape used for the 2007 DVD was used or not. Despite repeated requests Zoetrope attorney George Hayum wouldn’t even tell me if access to the HOD negative had been requested by Paramount Home Video. It was ridiculous.

It seems to me that this lack of interest and respect originates with Coppola, who owns the Hearts of Darkness elements. Hickenlooper has long believed that Coppola is fundamentally uncomfortable with the doc. “I think it makes him feel as if somebody had rummaged through his underwear drawer,” Hickenlooper says.

Coppola was willing to permit the release of the 2007 HOD DVD, yes, but that, Hickenlooper believes, was primarily a ruse to get promotional materials sent out for his then-upcoming Youth Without Youth and a doc that Eleanor Coppola, his wife, made about the filming of YWY, called Coda.

If I was a name-brand filmmaker in the last act of my life, I would politely refuse the Academy’s offer of an Irving Thalberg or Governor’s Award. If your career hasn’t been going great guns, accepting these honors at the Oscar awards, I feel, is a kind of admission to the world that you’re over.

These awardings are always a warm and emotional tribute, yes, and a profound moment of glory. Who could fail to be moved by the Academy saying “we’ve loved your work all these decades, and we want to show our appreciation even though you’ve been winding down for a while…we love you”?

But if you accept this honor, you’re basically saying, “Yeah, you’re right…I’ve had a great career but I’m now officially finished.” If people haven’t been returning some of your calls prior to accepting an honorary career Oscar, they won’t return any of them the morning after. No matter what your “friends” may tell you at parties, you’ll strictly be seen as a retirement village guy from then on. I would rather dream the foolish dream while writing my latest script or meeting with financiers or talking with directors about my next part, etc. Fuck the Gold Watch. Never say die.

This year’s honorees are directors Francis Ford Coppola (i.e., the Irving Thalberg recipient) and Jean-Luc Godard (Governor’s Award) and actor Eli Wallach. Okay, I’d accept it if I was Wallach because he’s…what, in his early 90s? He’s untouchable and un-diminishable. But if I were Godard and Coppola I’d respectfully tell the The Academy fathers “thanks but no thanks.”