20 Comments
What Happened Was

A friend has heard people describe this woman as (a) someone who should be cast in movies or (b) used as an example how to pitch a story to executives.

That Home Theatre Forum guy who today posted impressions of Terrence Malick‘s The Tree of Life, having seen it a day or two previously, says (a) “it’s finished” (but only Mr. Whackadoodle knows for sure!), (b) “it’s about three hours,” and (c) “I believe it releases in October but it may be a limited release [as] there is talk of a cut-down version, which Malick did for The New World as well, but nothing confirmed.”

The guy’s general comments, as transcribed on thefilmstage.com: “Saw Tree of Life the other night at work and it really is amazing or hypnotic, more like. I won’t give anything away here, but yes, it is long and there has already been talk in the news about Malick releasing it and then re-cutting it, and then re-releasing it, etc.

“The main bulk of the film is about [Sean Penn‘s character’s] childhood, growing up in Texas (reels 3-7 out of 9!). The “creation” footage is outstanding, absolutely jawdropping, and does indeed feel like 2001 – a lot of the effects are practical and your eyes can see that, which makes it really fascinating to watch. I don’t have a problem with the creation footage being connected to his boyhood. Most boys love dinosaurs, after all, so that’s how I looked at it.

“The story is framed around the death of his middle brother (in Korea?? We never know) and is a reflection on the circle of life, the evolution of life out of the mess of the Big Bang, but also about life itself (the strained relationship with his severe father, a stunning performance by Brad Pitt, just stunning), and the end of the Universe. I still haven’t given anything away that hasn’t already been said in the press. The film just has to be seen to be believed! One feels like a child again, seeing the world through young wide eyes.”

This beautiful photo of the storm that would soon besiege the Venice Film Festival was taken by producer Julia Chasman (25th Hour, Driving Lessons). I was a little too rough on Indiewire‘s Anne Thompson earlier today by suggesting she wasn’t trying hard enough, etc. The festival’s wifi press room was shut down during the rainstorm, forcing everyone (including Anne) to stop filing what they were working on and go elsewhere for wifi. So I get it. Criticism withdrawn. 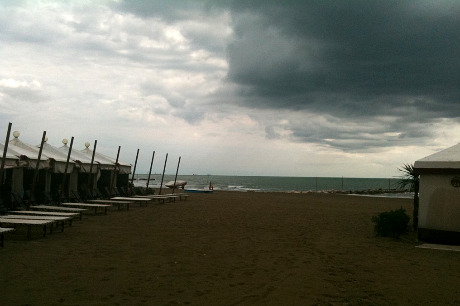 Hobo With A Shotgun is one of the greatest B-movie titles ever conceived. The fact that it’s not a joke trailer but an actual movie kicks it up another level. (It’s coming out sometime in 2011, although I know not when.) Seriously — when’s the last time anyone on the street said “hobo”? That’s a 1930s and ’40s Woody Guthrie term.

When’s the last time guys with holes in their soles squatted by a campfire next to railroad tracks and heated up a can of beans? The last time hobos were in the habit of doing that was when Preston Sturges was making Sullivan’s Travels. When’s the last time anyone ever referred to patrolmen as “bulls”? That terms is all but erased from the vernacular.

I don’t even remember this sequence being in the original Let The Right One In. Maybe I need to see it again. In any event this scene is nicely shot, cut, everything. It tells me that Let Me In (Overture, 10.1) may be exceptional in its own way, along with doing a good job of aping Tomas Alfredson’s original.

Not that I minded or was turned off by the red-band trailer, but trailers lie, cheat and hoodwink. That’s what 94% of them do (and are intended to do) so you really can’t trust any of them, ever. But this clip is okay. 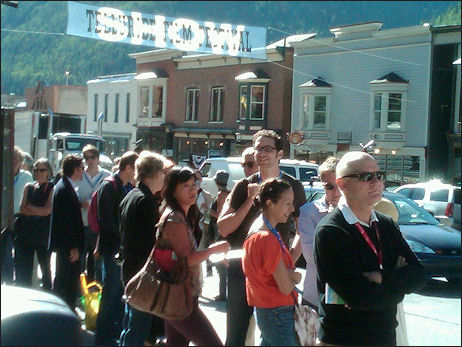 In the view of Guardian critic Peter Bradshaw, Sofia Coppola‘s Somewhere is basically a pallid thing, a B-side, “a movie which just floats through its running time without any sort of crisis.” 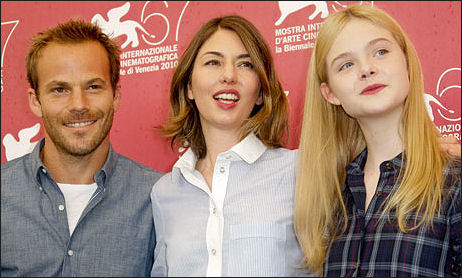 Except, that is, for “the subtle, insidious crisis of identity creeping up on Johnny Marco (Stephen Dorff), a pampered movie actor, holed up in the Chateau Marmont hotel in Los Angeles — a self-absorbed guy who is fawned upon by assistants, producers and especially beautiful women.

“Yet he is more borderline asshole than anything else, and never does anything really bad. Then his troubled ex-wife shows up, announces that she needs time for herself and leaves him to look after their 11-year-old daughter Cleo (Elle Fanning).

“In another type of movie, the daughter would be a sharp-tongued, feisty, wise-beyond-her-years cutester who would cheerfully wreck Johnny’s selfish adventures in boozing and womanising, and after a few screaming matches, force him to find the real spiritual values of fatherhood. But this never happens.

“Adorable Cleo just smiles sweetly at him and goes along with everything – more or less like everyone else in his life; there is only the blandest and most lenient recrimination right at the end..

“The movie is, arguably, far truer to life than a more obviously scripted account, and there are some nice touches – for his ‘old man’ makeup, Johnny has to endure a plaster mould slathered all over his head with breathing holes left for his nostrils. Like some monster or Egyptian mummy, we see him stifling with loneliness. Cocooned in celebrity, he can make contact with no one.

“Coppola is arguably very indulgent to both daddy and daughter, and to the rich and famous generally, and audiences may be bemused or exasperated, according to taste.”

:For all the similarities, this does not have the brilliant seriocomic moments of Lost in Translation. If that was her hit single, then this is its B-side.”

Sofia Coppola “retreads familiar territory with Somewhere, which is a smaller-scale companion piece to Marie Antoinette and Lost in Translation,” writes Indiewire‘s Anne Thompson. “Witty, spare and gorgeously framed [with] breakthrough roles for Stephen Dorff and Elle Fanning, [it] should play well for the young smart-house set.”

Okay, but how did Somewhere‘s journey feel? Where does it actually take you, and does the trip seem well worth it (or at least worth it) at the end? Does it succeed on its own terms? Is it finally a single, a ground-rule double…what? These are things I’d like to know.

In his debut Deadline posting, Pete Hammond reports that he ran into Alexander Payne, director of the forthcoming The Descendants, during his trip to the Telluride Film Festival, and that Payne said “he was coming back this time as a fan just to ‘see movies.'” 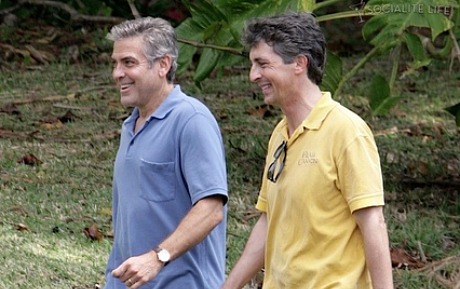 George Clooney, Alexander Payne during shooting of The Descendants, in a photo taken last March.

Hammond apparently didn’t ask Payne about The Descendants, his Hawaiian dysfunctional family drama starring George Clooney, or decided not to report this if he did. I’d been holding out hope that The Descendants might be given a last-minute December release by Fox Searchlight and — who knows? — become this year’s Million Dollar Baby. 2010 is regarded as a weak year, Payne was finished shooting last April or so and there’s plenty of room for a last-minute December entry to dive in and snag attention.

If I was Payne I would be slaving away 18 hours a day with my two editors and trying to talk Fox Searchlight into a late-inning release instead of galavanting around Telluride with all the lah-lahs. That’s what you do after you’ve finished your work, not before. Life is about what you can man up and accomplish in the short time you have on this planet, and not what you can…whatever, kick back and enjoy. That’s the dilletante’s approach.

The fact that Payne is in a kick-back mode tells us The Descendants will almost certainly not be coming out this year, but I wonder if any strong films are going to parachute into the awards race four or five weeks before the end?

Sofia Coppola‘s Somewhere, which will have its Venice Film Festival premiere this evening, has received its first review from the Evening Standard‘s Derek Malcolm, and it’s basically a “hmmm”-type response. 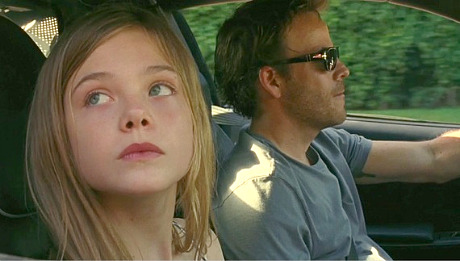 “Anyone expecting fireworks from Sofia Coppola after the lavish and controversial Marie Antoinette will be disappointed with Somewhere,” he begins. Fireworks?

“This quiet and restrained portrait of Hollywood star Johnny Marco (Stephen Dorff) and his on-off relationship with his 12-year-old daughter Chloe (Elle Fanning) is not the noisy showbiz chronicle other directors might well have made it.

“Johnny, divorced, lives in a suite at the Chateau Marmont Hotel. He drives a Ferrari, can pull any girl he likes, drinks a bit too much and takes the usual pills. We first see him in bed as two nubile blondes perform a pole-dancing number. He’s too tired to do anything but watch with a lazy smile.

“He is, however, not a brash or a bad man. He accepts his life of luxury with a shrug of his shoulders, doing what’s asked of him politely and never losing his temper. When Chloe comes to visit, he tries to keep her out of harm’s way, especially when they go to Italy for a dreadful junket culminating in a Berlusconi-type TV show.

“Coppola suggests the burgeoning relationship between the two, and Johnny’s basic discontent. [But] the film has no big dramatic moments, just a series of sequences gradually making the watcher aware of just why there’s a text on Johnny’s phone stating: ‘Why are you such an arsehole?'” I’ll bet money here and now that the spelling is different in the film.

“Dorff and Fanning play naturally and well — Coppola gives them every chance. It’s an unexpected change of gear for Francis’s daughter, who says her childhood is mined in the film.” Unexpected? It’s been fairly well telegraphed that Coppola is a fan of Michelangelo Antonioni, and that Somewhere was at least somewhat influenced by his early ’60s films.

Malcolm suspects that Somewhere “may last in the memory a little more than Marie Antoinette, if not quite as long as Lost In Translation.”

The Telluride Film Festival kicks off today, but for whatever reason the website doesn’t offer a schedule. There’s a PDF slate, but it’s from last year.

“It’s thundering in Venice,” Indiewire‘s Anne Thompson tweeted a couple of hours ago. “Torrential downpour. Folks in the press room are looking out the windows as a driving storm hits the Lido. I guess I’m not taking the ferry [to the] San Marco district in the near future. I did not bring an umbrella or a raincoat.”

If I was in Venice you would see video of this rainstorm up right now. And I would buy an umbrella and go wherever I wanted. One of my best Venice memories of all is taking the Lido-to-San Marco ferry in the middle of a rainstorm. The boat was rocking, rain sprays were hitting the passenger windows, you had to grab something to keep from falling. Jett went outside to see the waves and got soaked when one splashed over the deck. It was half Michael Mann-Ernest Hemingway and half Jacques Tati .

Thompson 10:10 am Update: “[Venice Film Festival] press office was closed due to huge rain leak before I filed my Somewhere review. Doing it now.”

This is the Jerry Lewis I know, as opposed to the guy who nearly wept with gratitude when he accepted his special Oscar. The octogenarian World War II generation and the Lindsay Lohans of the world generally don’t get each other, and guys as old as Lewis (84) are usually dismissed when they talk about spanking whippersnappers. But he’s not without perspective. He’s been there, used to get loaded and chase tail, knows what goes.