Support on Patreon Follow @wellshwood
39 Comments
"My Hands Are Dirty"

This is Drive, all right. Mood, aroma, atmosphere…all of it. Just shorter.

This trailer for next year’s special presentation of Kevin Brownlow‘s restoration of Abel Gance‘s Napoleon, unseen at this swanky level of presentation for over three decades, is slow to start. The show will play with a live orchestra (i.e., the Oakland East Bay Symphony) at Oakland’s Paramount theatre on March 24, 25, 31 and April 1, 2012.

Brownlow has added footage since the original showings at the 1979 Telluride Film Festival and then at the Radio City Music Hall in January 1981 (which I attended). The 1927 classic will screen at a slower projection rate to simulate the actual speed of the action when it was filmed. The new running time will be a bit more than five hours. There will be two intermissions including a dinner break.

3 Comments
Eyes Have It

It would be snarky to categorize Sarah’s Key (Weinstein Co., 7.22, NY and LA), an intelligent and delicately handled melodrama about a journalist’s exploration of a Jewish family’s incredibly tragic history, as a “holocaust soap opera.” It does, however, feel like this when the personal saga of the 40ish journalist (Kristin Scott Thomas) is focused upon. Mainly a thread about her being pregnant and wanting the baby and her boyfriend not wanting “to be an old dad,” etc.

I didn’t dislike these portions and I do understand the strategy (inspired, I gather, by Tatiana de Rosnay‘s book of the same name) of using a present-day character to take the audience into the past, etc. But I did feel underwhelmed by them.

The heart and marrow of Sarah’s Key is the sad and agonized tale of Sarah Starzynski (who’s mostly played by Melusine Mayance), a child who was scooped up during the arrests of Paris Jews in July 1942 and confined, along with her mother and father, inside the infamous Val d’Hiv arena before being sent to a concentration camp.

This is tragic enough, but when the police first come Sarah makes her younger brother hide in a bedroom closet and then locks him in for safekeeping, and keeps the key with her. Five or so weeks after her arrest she escapes from the camp and makes her way back to Paris with the help of adoptive parents to see about her brother. What she finds provokes such horror and despair that she never recovers,. The anguish stays with her as she grows up, emigrates to the U.S., marries and has a son, and right up to the moment that she decides to stop the pain. A bit of a Sophie’s Choice ending, in a sense.

The journalist’s story continues, however, when she tracks down Sarah’s son (Aidan Quinn), a Florence-residing chef who hasn’t a clue about his mother’s history. He becomes an angry denier when Scott lays it all out, claiming he doesn’t want to know, etc. Why am I going over this? Let’s drop this aspect.

There’s a significant pothole in the casting of Sarah’s Key. A weak link, to be more precise. Every film is a series of links in a chain, and if one of them fails to hit the right note or deliver the right element, the chain snaps. The movie doesn’t fall apart, exactly, but it does feel diminished to some extent. And the failure, for me, in Sarah’s Key is in the very different eyes belonging to the two Sarah’s (Mayance and Charlotte Poutrel, who plays Sarah in her late teens and early 20s).

Mayance has big, beautiful, glistening-pool eyes, and Poutrel’s eyes are hazel-like and a bit smaller and narrower. They’re really quite different despite the fact that eyes never change as a person ages. The instant you first see Poutrel you know for sure she’s not the little girl you’ve gotten to know over the last hour or so, and that the transition hasn’t worked, and that the illusion has been shattered.

And yet Poutrel, curiously, does strongly resemble Natasha Mashkevich, the actress who plays young Sarah’s mother during the first third. And Quinn, even more strikingly, has watery blue eyes that could have come from Mayance if she’d grown up and had him.

So the casting is interesting and almost right except for the totally unacceptable lack of resemblance between Mayance and Poutrel. This, for me, was more than a speed bump. It’s a stopper.

If I’d been inside Hall H ten minutes ago, I would have never tweeted “Peter Jackson is in the house for Tintin!,” as Indiewire columnist Anne Thompson did a few minutes ago. They’ve lost their aloof and scrutinizing composure down there, the hip bloggers have. Read their tweets aloud and you have to use a falsetto voice. Peter! Peter Jackson! And there’s Steven…Steven Spielberg! Eeeeeeee! 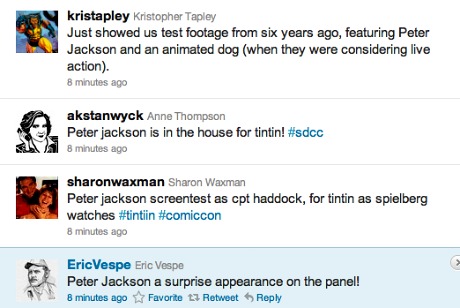 For the sixth or seventh idiotic time, male vampires are supernatural beings made of dead (i.e. no longer living) tissue. It follows that they’re not only incapable of fertilizing female eggs and/or creating a child, but incapable of having orgasms during vampire-human sex because they’re dead, and that even if they could experience some kind of simulated, super-vampire orgasm it would be just be for theatrical show (i.e., to make the female partner feel wanted and/or appreciated). 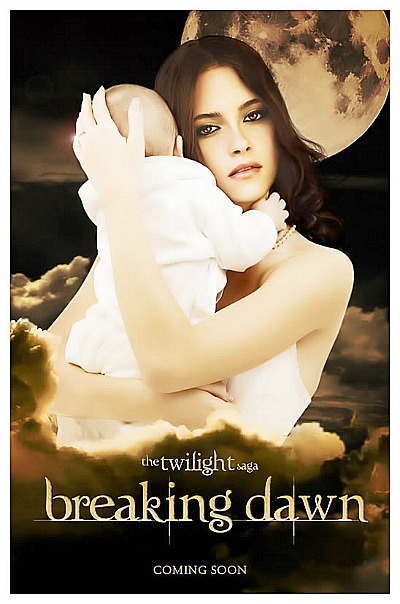 Certain stories have certain rules, and you can’t just throw them out because you feel like it. If you’re going to bite into the vampire sandwich, Stephanie Meyer, bite into it and live in that realm and stop cheating by breaking through the membrane.

Yesterday Harvard University honcho Lawrence Summers recounted the April 2004 episode depicted in The Social Network in which Cameron and Tyler Winklevoss visited his office to complain about a violation of Harvard’s student-ethics code by Mark Zuckerberg, etc.

Summers’ money quote was essentially that male Harvard students dress in jackets and ties for one of two reasons — i.e., they’re looking for a job or they’re assholes. Summers quickly came to the conclusion that Cameron and Tyler fit the latter category.

Today the Winklevii posted an open letter to Harvard University president Faust. It lamented the cavalier if not disrespectful manner of ex-president (and current Charles W. Eliot Harvard University professor) Summers during their April 2004 meeting with him, and emphatically contended that they are not, in fact, assholes.

The bottom line is that all exceptionally bright or creative people instinctively loathe to-the-manor-born preppy jocks wearing Brooks Brothers apparel. T’was ever thus & will be. In this sense Summers and Zuckerberg are brothers of the cloth.

Summers said yesterday (or was it the day before?) that The Social Network‘s depiction of the meeting he had with the Winklevii was more or less accurate.

This moment of compassion and generosity at Phoenix’s Chase Field was posted yesterday. Young kid shrieks and frets over failure to catch ball, a slightly older kid snags it instead…and hands it to the upset kid. A Captain America moment, or something like that. All but unthinkable in an adult context.

These aren’t deleted scenes — they’re deleted snippets, pickups, inserts and throwaways. And all of them worthless. This is another reason why George Lucas is the most loathed and despised franchise mogul of all time. I’ll never retrieve the 57 seconds I devoted to watching this cheap reel, and as far as I’m concerned Lucasfilm has stolen them from me.

These clips will be included in the big Star Wars Bluray package coming out in September. If you weren’t such a shameless huckster, Lucas, you’d let guys like me buy episodes #4 and #5 (A New Hope, The Empire Strikes Back) as stand-alones without having to purchase the box set. Only drooling fanboys want to watch The Phantom Menace or Return of the Jedi again. You can forget Episodes #2 and #3 also.

On the day the box set comes out dedicated Lucas-haters need to stage a big media-friendly bonfire event in which copies (with A New Hope and The Empire Strikes Back removed) are ceremonially burned. Throw copies of Willow into the fire while you’re at it.