I couldn’t help myself. I had to slip into the AMC Lincoln Plaza earlier tonight to check out the 9:30 pm Moneyball show and see how it looked. What I saw would break Bennett Miller‘s heart, and definitely Wally Pfister‘s. The general darkness of the image was appalling, horrific. The foot lambert level must have been 9 or 10 instead of the proper 14. And the sound was definitely lower than the sound levels for the trailers.

I had tears in my eyes. Miller and Pfister have worked so hard and so well, and then the AMC guys come along and fuck it all up for the customers. People all around me had paid $13 bills each to see a version of Moneyball that definitely blew chunks on a presentation level, and they didn’t even know how bad it was. But I did. I couldn’t take it after 20 minutes or so.

This wasn’t an accident or the projectionist slacking off, trust me. I’ve suffered through sub-par Lincoln Square presentations before and this shit is POLICY. These guys are institutionally committed to diminishing the visual and audio levels of movies that would look and sound a hell of a lot better if they were projected properly.

Team Lincoln Square doesn’t mess around with their IMAX presentations — those are fine. But they’re definitely degrading the audio-visual content in regular theatres. As far as I’m concerned they are the sworn enemy of quality projection.

And I’m a formerly licensed projectionist and I know from light and sound levels so don’t tell me. As Burt Lancaster said to Mickey Saughnessy in From Here to Eternity, “I ain’t tellin’ you — you’re tellin’ me.” 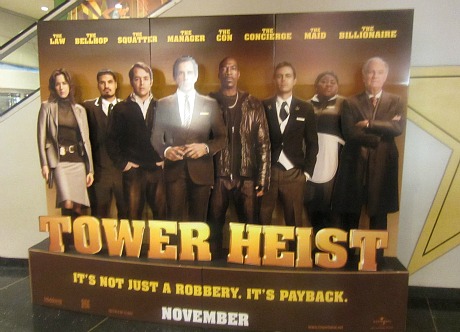 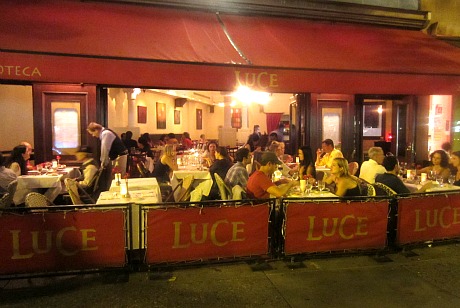 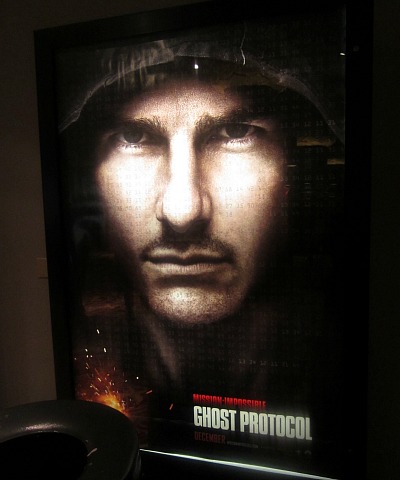 Awards Daily‘s Sasha Stone and I recorded an epic-length Oscar Poker this morning — i.e., 90 minutes. But it was a really good one, I thought. We began with Boxoffice.com’s Phil Contrino riffing about the Lion King 3D vs. Moneyball box-office battle, and then it was off to the races on anything and everything. Here’s a non-iTunes, stand-alone link.

Just a reminder that Kris Tapley‘s In Contention now lives in a closet inside a drop-down menu inside the orange-and-blue scattershot nightmare that is Hitfix. He and Guy Lodge are essential reads so please bookmark and act accordingly.

How do you go from being a multi-millionaire to living in a van on a street in South Central? Hold on, let me think…drugs? This is easily the most noteworthy Sly Stone story since the bogus rumor about his having had an affair with Doris Day in the early ’70s.

I’ve admired and sympathized with the ongoing Occupy Wall Street demonstrations because they’ve expressed a justified fury on the part of twentysomethings about how their financial futures have been shackled and all but ruined by Wall Street’s sociopathic money-moving games. As you might expect some NY cops got rough and maced some women, and some screaming resulted.

With my Toronto Film Festival distractions and nobody talking about it since, I missed the Film Society of Lincoln Center’s 9.14 announcement that the first three episodes of Oliver Stone‘s The Untold History of the United States will no longer screen at the 2011 New York Film Festival. I found it slightly bothersome that the reason given for the cancelleation was “scheduling conflicts.” Which of course conveys nothing and in fact blows smoke.

I don’t know what happened but you don’t announce a long-awaited film event at the NY Film Festival and then un-announce it unless some sudden and unanticipated force has intervened. Stone has been editing the Untold History series for a long, long time, and it’s no secret that the miniseries would be a political hot potato from Showtime. It was reported last summer that Untold has attracted some pro-Israeli venom.

I tried to get an answer earlier today about what really went down from both Stone and NY Film Festival co-honcho Scott Foundas…zip.

The three segments that were going to be shown would have focused “on the events leading up to America’s entrance into World War II, the war itself, and the unjustly forgotten figure of former U.S. Vice President Henry Wallace,” said a NYFF release.

The Untold screening would have been followed by a panel discussion featuring Stone, co-writer Peter Kuznick, historian Douglas Brinkley and The Nation‘s Jonathan Schell.

In place of the Untold History episodes, Stone will still apppear at NYFF to present a 25th Anniversary screening of Salvador.

Update: HE reader “reverent and free” has written in to say that “the three episodes in question were indeed ready because one of the researcher/writers, Eric Singer, attended a screening of them earlier this year and blogged about it on his website. But he seems to have removed the post now. I don’t have a screenshot unfortunately.”

Here’s an episode list from a posting last year.

I’m not the only one who’s been hoping that Rick Perry would win the Republican Presidential nomination because that would mean an Obama victory. But now, all of a sudden, he’s being seriously trashed by the Fox News gang. Fox News’ Brit Hume this morning: “[Rick] Perry really did throw up all over himself in the [last] debate at a time when he really needed to up his game….[he’s] about one half step away from almost total collapse as a candidate.”

Maureen Dowd: “In a flash, Rick Perry has gone from Republican front-runner to cycling domestique, riding in front of the pack and taking all the wind — or in this case, hot air — to allow the team leader to pedal in the slipstream.”

Everyone on the front lines has now seen (or will be seeing today) Moneyball. I know some people think I’ve been pushing too hard or too enthusiastically, and I don’t just think they’re nyah-nyah naysayers who say this stuff in order to pop me — I know they are because I know this film is the shit, and that it’s an all-around winner and a keeper. But if you feel the urge to counterpunch, please have at it. 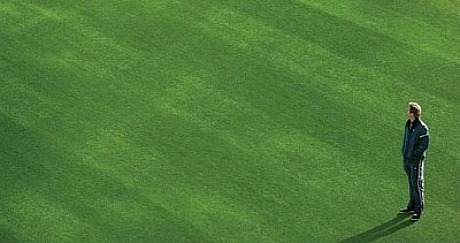 Repeating: “It’s mystical, statistical, spooky, emotional and wonderfully original. And wonderfully “pure” in a sense. The complexity mixed with the spirituality and the political reality of things…just brilliant.

Ditto: “Put another way, it’s about organizing a baseball team in a different nerdy way (saber-metrics and all that) and the political pushback that Pitt and Hill have to deal with from almost everyone, but — this is the exceptional surprise element — it’s also about how the forces and wills of the Gods suddenly step in and make things happen when they feel like it. Angels over the outfield. So call it a nerdy baseball movie mixed with spirituality and politics and adult-level complications…sublime.”

The fact that Lion King 3D edged out Moneyball this weekend, $22.1 million to $20.6 million, simply means that a lot of kids and families didn’t go to see the 3D attraction last weekend, and that families go in groups of three and four or more. It’s not an “aww, shit” for the Moneyball team at all. It’s a very strong start, in fact. It’ll probably wind up doing a multiple of four or five and hit $90 to $100 million. It’s hitting with all age groups except, to some extent, with the under-25s. (Sasha Stone‘s 13 year-old daugter Emma found it boring, and my 23 year-old son Jett said “I know it’s good movie but I like Drive better.”)

Phillip Seymour Hoffman‘s Moneyball performance as Oakland A’s manager Art Howe is a hard-cut diamond type of deal. It’s perfectly measured and shaped and, for me, hilarious. The performance is all about Howe’s loathing and contempt and mistrust of Brad Pitt‘s Billy Beane, and the calmly stubborn way he keeps saying “um, nope,” “I don’t buy that” and “sorry but you’re living on another fucking planet.”

I absolutely worship the way Hoffman plays the above scene with Pitt and Jonah Hill. Pitt sticks his head in and says “Art, got a minute?” Hoffman glares at Pitt, almost sickened by the sight of him, and waits three seconds before gesturing “I guess I can’t get out of this” with his hands and arms and saying “yah…take a seat.” And then when Pitt drops the bomb about a certain first baseman, Hoffman waits six seconds to respond.

He’s so perfect I can’t stand it. The man has to be considered and tributed as a Best Supporting Actor contender.

I don’t have anything that impassioned or profound to say about Hill, but I love his final line in this clip:

Hollywood Reporter awards-season columnist Scott Feinberg has sent me a dated video (recorded two weeks ago) of Elizabeth Olsen talking with him about Martha Marcy May Marlene. He sent me this because on 7.31 I riffed on the lack of interesting voices (and the preponderance of mincing, squeakity-squeak voices) among under-30 actresses, and because Feinberg feels that Olsen’s voice has a snappy, stand-out quality. .

I half agree, although Olsen does utter the word “totally” at one point, and that’s not good. “Totally” is as much of a term to avoid as “absolutely” when striving to convey emphatic agreement.

The truth is that I pretty much write off anyone of any age who says “absolutely” in any context. Anyone who uses that over-used word is conveying a certain shit-shovelling mentality. It means he/she is being less than fully honest or exacting in describing how he/she feels. Spokespersons often use “absolutely” a lot on news shows. The instant that word passes by their lips they are relegated to the degraded status of “bullshitting spokesperson” as opposed to “interesting or impassioned person worth listening to.”

And “totally” is a go-along teenaged or 20something female mallspeak ditzoid term. If you’re young or youngish and want to take yourself down a peg or two in the estimation of your elders, say “totally”. You’ll be instantly labelled as intellectually stunted for years to come.