We all recently ignored the ten-year anniversary of Mark Pellington‘s The Mothman Prophecies. I will always love this film for its all-around creepiness, and for the genius of the name Indrid Cold. That has to be one of the best names ever created by anyone for any purpose. Whoever heard of an alien with a first and last name, let alone a cool-sounding one? Until this film came out, I hadn’t.

“Here’s a heads-up on Ross Ashcroft‘s Four Horsemen, a very good documentary that I caught tonight at the Curzon Soho premiere,” writes the London-based Toby Macdonald. “It’s like a more doom-laden and oddly more inspiring version of the excellent Inside Job, and I think it would be right up your alley.

“It chronicles the gangster banks, the end of empire and the terrible victory of crony capitalism. It has some brilliant heavyweight interviewees, and it puts forward solutions too which seems very brave for a documentary these days. It feels very appropriate on the day that the Vampire Squid, which has massive sway here in London, took a hit.”

There’s only one way to make a creatively and financially successful feature based on 24, the rightwing Keifer Sutherland series about fighting terrorism. And that’s to up the game all around. It would have to feel and play on a much cooler scale and within a much hipper realm than what’s been generated by the series. It couldn’t just a big-screen 24 that you have to pay $30 bucks to see with parking. That wouldn’t work.

I’m guessing that deep down 20th Century Fox management was sensing that the 24 movie, which Sutherland intended to star in and Brian Grazer would have produced, wasn’t on-track to be an extra-special, Michael Mann-ish thing, and that’s why they didn’t want to spend any more than $30 million or pay Sutherland any more than a pathetic (and, let’s face it, insulting) $1 million, and that’s why the show has been shut down, as TheWrap‘s Sharon Waxman is reporting, “over budget and star salary issues.”‘

I’m sorry but I don’t feel I need a 24 movie in my life anytime soon. There’s no real mystery to Sutherland after all these years of carrying the series, and the star of a film has to have at least some of that charismatic je ne sais quoi. I enjoy rightwing movies if they’re handled well (i.e., Man on Fire was terrific) but 9/11 was 10 1/2 years ago…later, move on.

Variety‘s Jeff Sneider and Justin Kroll are reporting that Michael Fassbender will star in an adaptation of Charles Martin‘s The Mountain Between Us, a romantic survival drama, with Gerardo Naranjo (Miss Bala) directing.

This sounds like an all-but-guaranteed quality vehicle due to the hand of Naranjo, who is Michelangelo Antonioni reborn.

Amazon/publisher rundown: “On a stormy winter night, two strangers wait for a flight at the Salt Lake City airport. Ashley Knox is an attractive, successful writer, who is flying East for her much anticipated wedding. Dr. Ben Payne has just wrapped up a medical conference and is also eager to get back East for a slate of surgeries he has scheduled for the following day.

“When the last outgoing flight is cancelled due to a broken de-icer and a forthcoming storm, Ben finds a charter plane that can take him around the storm and drop him in Denver to catch a connection. And when the pilot says the single engine prop plane can fit one more, if barely, Ben offers the seat to Ashley knowing that she needs to get back just as urgently. And then the unthinkable happens. The pilot has a heart attack mid-flight and the plane crashes into the High Uintas Wilderness– one of the largest stretches of harsh and remote land in the United States.

“Ben, who has broken ribs and Ashley, who suffers a terrible leg fracture, along with the pilot’s dog, are faced with an incredibly harrowing battle to survive. Fortunately, Ben is a medical professional and avid climber (and in a lucky break, has his gear from a climb earlier in the week). With little hope for rescue, he must nurse Ashley back to health and figure out how they are going to get off the mountain, where the temperature hovers in the teens.

“Meanwhile, Ashley soon realizes that the very private Ben has some serious emotional wounds to heal as well. He explains to Ashley that he is separated from his beloved wife, but in a long standing tradition, he faithfully records messages for her on his voice recorder reflecting on their love affair. As Ashley eavesdrops on Ben’s tender words to his estranged wife she comes to fear that when it comes to her own love story, she’s just settling. And what’s more: she begins to realize that the man she is really attracted to, the man she may love, is Ben.” 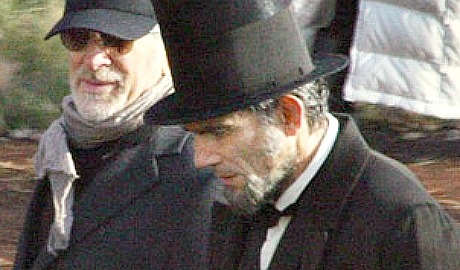 With Meryl Streep, Justin Beiber and Johnny Depp “lending their support” to Bully‘s rescind-the-R-rating campaign, how can the MPAA continue to refuse to downgrade the rating to a PG-13? So that…you know, Bully can be shown in schools with the five or six f-bombs intact? So that the film can be seen by the kids who need to see it, but without director Lee Hirsch having to capitulate to the bluenoses by sacrificing any of the vocal realism. Lord knows it’s vital that audiences hear f-bombs spoken by real-life bullies, etc.

Seriously — congratulations to Change.org‘s D.C.-based Mike Jones for mounting a vigorous and relentless email campaign on behalf of the Bully vs. the MPAA campaign.

What’s so degrading about a homeless person earning a little money as a roving wifi hotspot? Yes, they’re being exploited. They’re being paid for the same function that telephone poles perform, albeit with mobility. But at least they’re being paid to do something, which is better than lying around or bumming spare change or catching zees on a park bench…right? 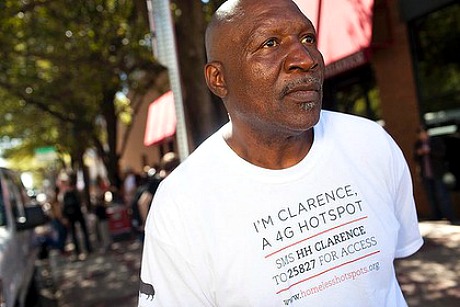 South by Southwest attendees complained that this marketing scheme, an initiative by BBH Labs, was robbing Austin’s homeless of their dignity. This has led BBH chairman Emma Cookson to declare that her company has “pulled the plug and will not go forward with plans to continue the project in New York,” according to a 3.14 N.Y. Post interview with Kevin Fasick and Don Kaplan.

How else are the homeless going to earn a little coin? By going online and managing their investments? If I didn’t have a roof over my head I sure as hell wouldn’t turn down BBH’s offer. When the going gets tough the tough get going.

How different would this situation be if BBH Labs had offered to pay homeless guys to walk around with an advertising sandwich board in midtown Manhattan? Poor guys used to do this back in the 20th Century. Somebody should have taken them aside and said, “Hey, man…where’s your dignity?”

Remember when the homeless didn’t have a p.c. image as former math teachers, real estate agents, sports-equipment salespersons and stockbrokers who’ve temporarily fallen on hard times and are therefore without lodging, sustenance or credit cards? Remember when they used to be seen as bums and vagrants? As people who’d obviously experienced bad luck but also — can we be frank? — as likely victims of alcohol abuse or mental-health issues?

What would David Huddleston‘s Jeffrey Lebowski say about this? “Get a job, sir!”

But it’s a job that lowers my dignity, Mr. Lebowski. I may be homeless for the time being but I have a soul and I have rights and I have a dream that one day I’ll be back on my feet, earning my way with a steady gig and paying taxes and driving my own car and living in a nice apartment.

“And how do you think you’re going to get back on your feet?,” Lebowski would reply. “By complaining about your dignity to news reporters? Show some of the enterprising spirit that made this country great by doing whatever you can short of breaking the law to earn whatever you can, and by saving as much as you can until you can afford to start living in a decent place. Life isn’t easy, son. But I’ll tell you one thing for sure, and that’s that the bums will always lose! Condolences!”

Back in the late ’60s or early ’70s, Esquire magazine ran a photo-spread piece called “Bums.” They went down to the Lower East Side and found a few winos, and brought them uptown and fed them and cleaned them up and dressed them in the best elegant-smoothie clothes that money could buy, and took their picture in a studio. Some of the bums looked pretty good and pretty happy (at least while they were being photographed). They were definitely being exploited, these guys, but would they have been better off if Esquire hadn’t offer them money to take part in this little charade?

How come you never see any Asian homeless people?

For me, this satirical HuffPost video nicely sums up the Obama alienation factor among the liberal base — i.e., progressive agenda-wise, Obama makes JFK looks like LBJ.

The assertions are questionable here and there (the administration’s early ’09 financial stimulus was too modest but did that really translate into the Obama team doing “not much”?) but the underlying feeling is that there’s very little he won’t modify or dilute or cave on if the Republican wacko right acts belligerently enough.

“Which Obama will be re-elected — Campaign Obama, who has a phenomenal ability to inspire and to challenge a broken status quo, or Governing Obama, who will seemingly do anything not to ruffle too many feathers?

The video, an interview with Obama strategist David Lancer, “takes on the idea, often put forth by various members of the Obama camp, that every compromise, capitulation, and seeming surrender the president makes is, in fact, just a brilliant strategy that we don’t yet understand,” Arianna Huffington writes in an accompanying essay.