46 Comments
“Why Would You Want To Do It Any Other Way?”

I’ve seen Michael Mann‘s The Last of the Mohicans three times — once during the initial 1992 theatrical release, an expanded edition on a DVD a few years ago and then the definitive director’s cut Bluray in 2010. 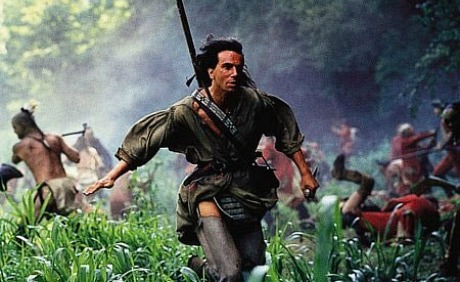 The Bluray is the best version by far, but for some reason I’ve never managed to love Mohicans. I’ve always liked, admired and respected it but my heart goes out to Heat, The Insider, Collateral and Thief.

I nonetheless would have attended the special screening of the definitive director’s cut at L.A.’s American Cinematheque on Friday night, if no other reason than to listen to Mann talk about it with L.A. Times guy Geoff Boucher. In Contention‘s Kris Tapley did, however, and has provided a well-written report and an mp3 of the discussion.

“It’s the law and order of nature — as it gives way to the impositions of occupiers — that largely governs the tone and atmosphere of Mohicans,” Tapley writes. “The film is unique in Mann’s canon for its period trappings, but of a piece with his penchant for deep emotional currents that announce themselves only in the nuance of performance.

“Indeed, it is still the film’s sweeping romance, its epic sadness, its viscous sense of honor that resonates emotionally to this day.”

During the post-screening q & a Mann explained the difference between ’92 and the definitive director’s cut.

“I understand story better [now],” Mann told Boucher. “When I was doing the original in 1992, I wanted to jam or insert the audience into the narrative so that things would just happen and you kind of tried to find out where I am in context, kind of inductively. And that wasn’t really serving the story. There’s a hopefully much clearer path in this version. The story is presented in a more deductive way.”

The film was in a sense under-served, Mann feels, by James Fenimore Cooper‘s novel, a piece of arrogant Euro-revisionism which he called “not very good.” He said that the film was “saved” by a diary written by Louise-Antoine Comte de Bougainville “who later goes to Hawaii and discovers Bougainvillea, which we have all over Los Angeles — he wrote a diary of every single day of that whole French and Indian war campaign. And the diary reads — it’s ironic, it’s funny, it’s sarcastic, it’s fantastic. But it literally told us what happened every single day of August 1757.”

Tapley’s best observation: “A simple question [for Mann] yields a bounty of information, as if unlocking the door to a closet packed with ideas waiting to tumble out. He’s meticulous, and it’s not an affectation.”

Best Mann quote: “Daniel Boone could leave a populated area and spend two years in the wilderness, eat three meals a day and live. These were all techniques learned from the American Indians. So the idea was, which I firmly believe, if an actor can actually do the things of the person he’s portraying, he truly becomes that person. You do it, you own it…[and] as a director, that’s what you want. I’m interested in actors and actresses who are for real, who are adventurous, who are very ambitious, who see it as an adventure and are ready to kind of commit, not out of discipline or coercion but out of, ‘Why would you want to do it any other way?’ Who wouldn’t want to do it if you could?'”

Best IMDB Anecdote: “Many long nights were spent filming the siege scenes. Due to the expansive area involved, loudspeakers were installed around the battlefield and fort so directions could be easily given to the hundreds of cast and crew. One night after many long hours, Mann was heard to shout over the speakers, ‘What’s that orange light? Turn out that orange light!’ After a pause another voice (an A.D.?) came over the speakers stating, ‘That’s the sun, Michael.'”

Drunken soccer fans stumbling around prior to today’s game between Dortmund BVB and Bayern Munchen. Dortmund was victorious, but I was too appalled by the alcoholic bellowing and carousing around to care.

If you want a lustrous representation of Delmer Daves‘ Broken Arrow (1950, the first major post-WWII Western to portray Native Americans sympathetically, you must go to zee French! Their Bluray has been out since mid-April. Costarring James Stewart, Jeff Chandler (who used to wear women’s underwear when he was married to Esther Wlliams), Debra Paget…and with no fascist cropping because it was made in 1950. 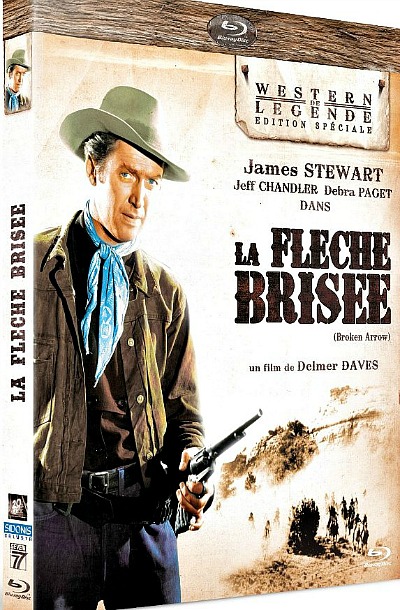 Bernardo Bertolucci‘s last film was The Dreamers (’03), and then he suffered a series of back surgeries that led to his being in a wheelchair…at age 72! And then he announced last year that his return film, Io e Te (Me and You), based on Niccolo Ammaniti‘s young-adult book about a 14-year-old boy “who hides from the world in his family’s basement, along with his even more troubled 25-year-old sister,” would be shot in 3D. Then he changed his mind about 3D, calling the idea “vulgarly commercial.” 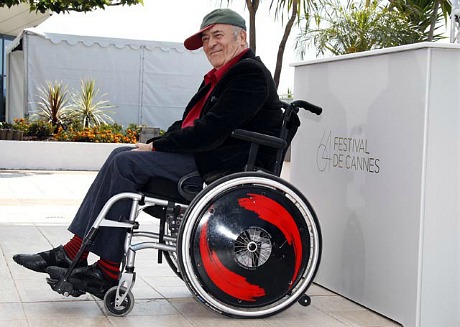 The only lesson I can derive from Bertolucci’s wheelchair existence is that the older we get, the more spiritual we become. Everything is about the body and the senses and obvious hungers when you’re an infant, and then you start to gradually discover the inwardness and the centered-ness of things, and by the time you’re 20 or 22 or so (if you’re not a total Mitt Romney-like asshole, that is) you know that the spiritual is where it’s at. So if you’ve lost your legs at age 72, you at least have that to fall back on — you don’t need to walk to commune with the sublime and the infinite.

But it still sucks. Walking miles and miles is one of the greatest things you can do with your time when you’re not writing or fucking or eating great food and watching perfectly mastered films on Bluray that haven’t been aspect-ratio raped by Bob Furmanek and the 1.78 or 1.85 fascists.

Io e Te has its press screening at Cannes on Tuesday, 5.22, and its press conference on Wedneday, 5./23.

Out of nowhere I decided last night to rent a DVD of Mike Nichols‘ Heartburn (’86, which I hadn’t seen in a good 20 years. My recollection was that it was smoothly assembled with two super-confident, movie-star performances from Meryl Streep and Jack Nicholson, and that it had a flush, slightly smug air about it, and was intermittently entertaining in portions but not that great overall, and was actually flat toward the end.

But I was moved to give it another go. And it was intermittently entertaining once more. I miss this kind of well-funded, well-acted, sophisticated adult dramedy with that Nichols attitude and a fine commercial gloss. I didn’t even mind the Carly Simon songs. And Streep’s portrayal of Rachel Samstadt (i.e., the stand-in for Heartburn screenwriter-novelist Nora Ephron) has many genuine moments, especially of vulnerability.

But the film has a huge roadblock or two (or three). Ephron’s screenplay, based on her mostly autobiographical 1983 novel of the same name, charts the breakdown and dissolution of her marriage to Watergate reporter and novelist Carl Bernstein. Bernstein is called Mark Forman in the film and played by Nicholson, who came aboard at the last minute when Mandy Patinkin, unhappy with his part, left the film early on.

The problem is that Nicholson’s affair with the unseen giraffe lady with the big splayed feet (inspired by Bernstein’s affair with Margaret Jay) happens entirely off-screen and reveals nothing at all about Nicholson’s psychology. All you can sense is that he feels vaguely threatened by fatherhood and responsibility. It just feels bizarre that the affair just happens without the audience being told anything. Nicholson’s Mark is just a selfish shit (which may well have been the case except it takes two to bring a marriage down), and I felt bothered and irritated that I wasn’t getting the whole story.

And their friends (Richard Masur, Jeff Daniels, Stockard Channing, Milos Forman, et. al.) do nothing but sit around at weddings and dinner parties and picnics and share knowing glances and go “Well, yeah…obviously” and “cluck, cluck, cluck.” I began to really hate this bunch. Do they have lives? If so, do they involve disappointments or failures or betrayals that are similar to the ones being endured by Mark and Rachel? I gradually began to dislike this Greek chorus more than Nicholson’s character, in a way. I wanted at least one of them to get killed in a car crash.

“The movie is full of talented people, who are fun to watch, but after a while the scenes that don’t point anywhere begin to add up, and you start asking yourself: ‘What is this movie about?’,” wrote New Yorker critic Pauline Kael. “You are still asking [this] when it’s over, and by then a flatness, a disappointment, is likely to have settled over the fillips you’d enjoyed.

“Although Ephron is a gifted and a witty light essayist, her novel is no more than a variant of a princess fantasy: Rachel, the wife, is blameless; Mark, the husband, is simply a bad egg — an adulterer. And, reading the book, you don’t have to take Rachel the bratty narrator very seriously; her self-pity is so thinly masked by humor and unabashed mean-spiritedness that you feel that the author is exploiting her life — trashing it by presenting it as a juicy, fast-action comic strip about a marriage of celebrities.”

Fans of those extended uncut shots in Let Me In will recognize the hand of dp Greig Fraser in this carefully choreographed action scene (i.e., Slaine and Sam Shepard roughing up Ray Liotta) from Andrew Dominik‘s Killing Them Softly.

Fraser is either currently shooting or recently wrapped shooting on Kathryn Bigelow and Mark Boal‘s Zero Dark Thirty. He also shot Snow White and the Huntsman…uggh!

So where’s the clip of Pitt doing something or other?

Nikki Finke is reporting/opining that Warner Bros’ and Tim Burton’s Dark Shadows is a shortfaller with about $28 million expected by Sunday night. Divide that figure by 3,755 screens and you’ve got an average of $7456 — not terrible but the droll Johnny Depp vampire comedy was predicted to earn a minimum of $35 million, Finke writes, and it should have opened to at least a $40 to $50 million, especially given the $150 to $175 million cost.

All I know is that I felt intrigue and interest all along but almost everyone I’d read or heard from in the weeks before the opening was dumping on it sight unseen. This weekend’s earnings are about those downish feelings and not the reviews. So what happened? My moderately pleased or placated review ran two days ago.