I think it’s asking too much of Glenn Kenny to pen some kind of dismissal or condemnation piece every time Russell’s film wins an award. SLP hating is a pro bono thing, after all, and Kenny has a job to hold down, bills to pay. He needs to divvy up the responsibility with at least one other Silver Linings Sourpuss, or better yet two. 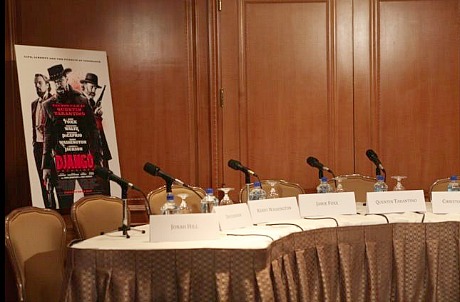 As far as I can foresee we’re looking at 16 possible Oscar-calibre films due in 2013. I can predict one thing for sure: between his lead roles in Saving Mr. Banks and Captain Phillips Tom Hanks is looking at an almost certain Best Actor nomination. The only other guarantee is that Lee Daniels’ The Butler will be a fiasco, but you knew assumed that going in.

In the order of likely quality, the probable picks of 2013:

(16) Baz Luhrman‘s The Great Gatsby (which might have issues).

If you want to be liberal about it there is also Terrence Malick‘s two ventures — the film formerly known as Lawless plus Knight of Cups (neither of which might not be released until 2014 or 2015…you know Malick).

One could also include Ben Stiller‘s The Secret Life of Walter Mitty, Nicholas Winding Refn‘s Only God Forgives, Ron Howard‘s Rush and David Cronenberg‘s Maps to the Stars. (Thanks to HE readers bfm and Jeremy Baril.)

The critics, columnists and commentators who’ve trashed the 48 frames-per-second (i.e., HFR) presentation of The Hobbit: An Unexpected Journey should be ashamed of themselves. They are simply about blocking the doorway, and to me that’s reprehensible. For me, 48 fps greatly lessened the agony of sitting through Peter Jackson‘s 166-minute-long film because the added detail is at least something to sink into in the absence of the usual basics that make a film enjoyable.

The naysayers know this and they still put the process down because it’s new. They want to bathe in familiar bathwater. That’s really the only reason.

Okay, they have two reasons. One, 48 fps doesn’t look like the cinema they’ve known all their lives. And two, it’s too vivid and detailed and video-like, and therefore not filmy or painterly enough. But for inherently empty and intentionally synthetic tentpole films — lame, insipid, FX-driven, comic-book-based — 48 fps is a Godsend. Empty crap is far more tolerable when you can at least delight in the clarity and the specificity. 48 fps is needless, I feel, when it comes to any kind of quality-level fare, but it’s exactly what the doctor ordered when it comes to movies that are torture to sit through.

And in throwing out the bathwater of 48 fps, the naysayers are also throwing out the baby of HFR cinema by any calibration. This is their greatest sin. Because everyone will be cool with HFR at 30 frames per second (the frame rate used by Todd AO in the mid ’50s), and it will work with any film of any mood, focus or attitude. If everyone is saying “no” to 48 fps, which I strongly disagree with, let’s at least talk about 30 fps. It’s a significantly better thing than 24 fps (smoother, more fluid, less pan blur), and yet it looks cinematic.

I never get a Christmas tree for the holidays. Jerry Bruckheimer used to send a nice big aromatic wreath that I’d hang on my door, but I haven’t been a fan since he stopped making sirloin-steak guy movies (i.e., Con Air) and went all Pirates of the Caribbean so that phase is over. Two days ago I bought this can of Shimmering Spruce and sprayed it around when I got home. I have to admit it put me in the mood. This plus Alistair Sim/Charles Dickens. It’s come down to this. 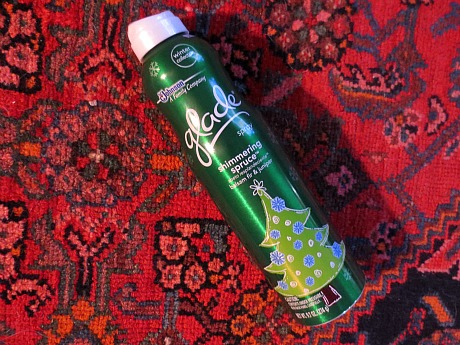 14 Comments
No Accounting For Taste

Tolkien-heads have rushed out to see The Hobbit: An Unexpected Journey, fine. A projected $84.7 million by tonight. $37.5 million on Friday, $28.1 million yesterday and a likely $19 million today. What I don’t get is the ‘A’ CinemaScore from audiences. Especially given the 25% drop in business from Friday to Saturday. This is no one’s idea of a satisfying film. It goes on way, way too long, and there are two more to go. Jackson committing to a trilogy is/was about assuring revenue for Weta Digital — let’s be frank.

And what was the Joe Popcorn reaction to 48 fps in and of itself, by the way? Have there been any surveys that focused on this technology alone?

“The people who fight and lobby and legislate to make guns regularly available are complicit in the murder of those children. They have made a clear moral choice: that the comfort and emotional reassurance they take from the possession of guns, placed in the balance even against the routine murder of innocent children, is of supreme value. Whatever satisfaction gun owners take from their guns is more important than children’s lives. That’s a moral choice, clearly made.” — from Adam Gopnik‘s 12.14. New Yorker piece, “Newtown and the Madness of Guns.”