After scanning Brad Brevet‘s “50 Most Anticipated 2013 Films” piece on Rope of Silicon, I’m adding 15 or 16 films to a previously posted rundown of 29 likely 2013 award contenders, must-sees and perk-ups. Not one is a low-rent superhero comic-book CG monster-action popcorn movie…not one. A few visionary fantasies aimed at Joe Popcorn, okay, but made by high-end directors.

(15) Baz Luhrman‘s The Great Gatsby (which might have issues);

Also: Terrence Malick‘s two ventures — the film formerly known as Lawless plus Knight of Cups (neither of which might not be released until 2014 or 2015…you know Malick). (2) 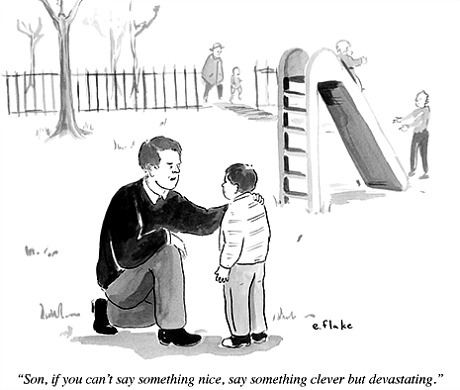 The relentlessly moderate and mild-mannered Kris Tapley (In Contention) and Anne Thompson (Indiewire) sized things up last Friday. Kowtowing to Skyfall, Life of Pi, Les Miserables, etc. An interesting year, they say, for controversy (Zero Dark Thirty, Django Unchained), a large number of big contenders, the shorter Phase One, etc. Tapley: “I would not be surprised if there are 10 nominees.” The Wrap‘s Steve Pond “is quite certain that it will be eight,” says Thompson. And in the Best Director race, she thinks Tom Hooper “is out.”

Having just stumbled out of Gangster Squad and apparently gasping for air, Marshall Fine has proposed that all guns be banned from movies and TV.

Not for ethical or social reasons, although the absence of gunfire in mass entertainment would probably be, at the very least, an interesting thing to experience and quite possibly beneficial in certain ways. No, what Fine is really suggesting is a radical creative challenge to all filmmakers, particularly the action crowd.

Instead of always shooting your way out of situations, what if you guys had to figure some other solution? Could you? Do you have the imagination? Or would you just give up and complain and stamp your feet and yell “I want my Glock back!”?

If I was Emperor of Hollywood, I would impose a ten-shot rule. You can still use firearms to resolve conflicts, but using dozens or hundreds of bullets is out. Okay, you can use automatic gunfire if the film is about a wartime situation or about the Newtown or Aurora massacres or about the St. Valentine’s Day Massacre. Or is a remake of The Wild Bunch or Heat or something in that vein. Otherwise you’ve have to shoot no more than ten bullets. That would be a challenge that would separate the men from the boys, you bet.

I’ve mentioned this before but think of how the gunplay feels in Shane, in which guns are fired sparingly in just three scenes — Alan Ladd “shooting that little white rock over there,” Jack Palance shooting Elisha Cook Jr. in the mud, and Shane gunning down Palance and Emile Meyer (Riker) and John Dierkes (Riker’s brother) in the final scene. Maybe nine or ten bullets in all. And each bullet means something.

In Peter Weir‘s Witness there was one brief shootout in a garage and a shootout on a Pennsylvania farm but I’d be surprised if more than ten shots were fired all in all. Okay, maybe twelve.

Remember that Robert Towne anecdote from the ’90s about how he’d written a scene in which his hero had picked up a rocking chair to defend himself against a couple of bad guys? And how the studio came back to him and said, “No rocking chairs…that’s too effeminate… have him pick up a baseball bat instead.” And how Towne concluded, “That’s what’s wrong with Hollywood these days…baseball bats!” But in today’s Hollywood a hero using a baseball bat (or a log, like Harrison Ford does at the end of Clear and Present Danger) instead of a .45 or an AK-47 would be novel and welcome.

“I’m not suggesting this because real handguns and automatic weapons are a threat to humans everywhere, though that is true,” Fine writes. “Nor is it because the casual, often comedic presentation of gun violence in films and TV shows tends to anesthetize young viewers to violence and its effects. Or that it warps their perception of reality so that it seems like a natural segue to move immediately from an argument to, say, lethal gunplay. The science isn’t all in on that last one, but I’d wager on the side of the empiricists.

“No, I believe we should ban guns from movies and television because they’re always the most boring and predictable dramatic choice you can make.

“And I say this, in spite of the fact that big-budget action films attract a mass audience that is entertained by extended exchanges of automatic weapon fire, in which hardly anyone ever gets hit. (Except when those automatic weapons are being fired by the hero – who can make every bullet in a machine-gun burst strike a different enemy.)

“A movie like this week’s Gangster Squad lend[s] credence to the theory that the mass audience would watch a movie that was nothing but two hours of fireworks, if each explosion was accompanied by blood spatters. Those kind of shoot-outs are not just a cliche in action films; they’re practically wallpaper. The shoot-’em-up scene is such a foregone conclusion that there simply is no pleasure or thrill to be derived from it.

“Guns are drama’s most reductionist element. Cell phones (or their lack of signal) have become a crutch for contemporary screenwriters as a dramatic device – but guns are the all-time fallback position. When in doubt, shoot first and ask questions later.

“Obviously, the kind of gun culture fostered in movies, the ease (and sometimes, amusement) with which life is taken — these are contributing factors to a culture that offers sudden national fame to gun-wielding mass killers, via the sensational coverage of those events. I personally don’t blame movies for the real-life gun violence; that’s the NRA’s excuse.

“I’m just a movie critic who believes that guns have long since made movie-makers lazy, based on the experience of seeing a lot of movies every week. And I’m here to call for a moratorium on guns in movies until our movies get better as a result. A lot of them couldn’t get worse.”

I understand that stories about characters who are standing at a crossroads in their lives make for fertile soil, and that good films often result from this situation. But I don’t want to read about a character having come to a crossroads ever again in a synopsis of any kind. And I’m saying this not even knowing for sure if it’s more proper to say “crossroads” or “crossroad.” If the term is preceded by an “a” and therefore more or less treated as a noun, it should be a singular…right?

I know it’ll be difficult to avoid the cliche, but that’s the rule from here on. You can say that a character has arrived at a juncture or hit a roadblock or run out of gas or is halfway there or is stuck on a never-ending journey or has skidded into a ditch or has no direction home . But no more “standing at a crossroads.” (Or a crossroad.) And that goes double for any and all Robert Johnson biographers.

Speaking as a lifelong worshipper of Michelangelo Antonioni‘s alienation trilogy of the early ’60s, I’ve always felt closer to L’Avventura or L’eclisse than La Notte. But I’m willing to give the latter a fresh try when the Masters of Cinema Bluray arrives in late April. The claim about “previously censored sequences restored for the first time” on the Bluray might be bogus. A Criterion forum guy says the restored footage was on the earlier MOC DVD. 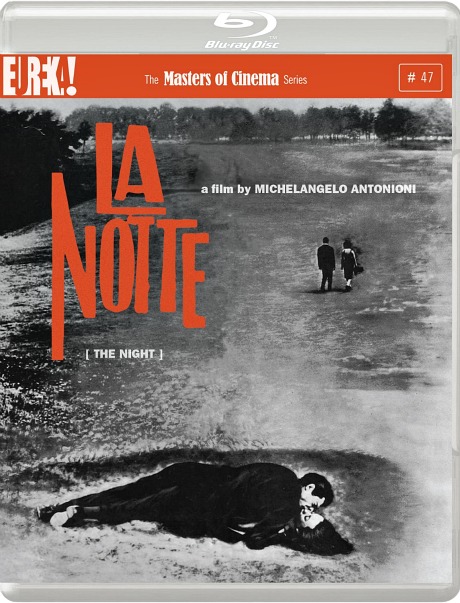 But seriously….orange? Orange on a golf course? How could a color that says traffic cones and prison jump suits blend with a sublime classic that oozes black-and-white European perversity? The same fanatic who designed that Masters of Cinema Touch of Evil Bluray with that awful emphasis on orange is at it again. Before the orange vogue kicked in four or five years ago, the only person who was totally down for this color was Frank Sinatra.

I feel a slight tingle of pleasure whenever a new Bluray of a ’50s or ’60s film is released in 1.66. The 1.85 fascists will insist otherwise so as to appear moderate and reasonable, but I know that deep down they wince inside every time they see the term “1.66.” They’re a bunch of One-Eyed Jacks. I’ve seen the other side of their face.

If I had the discretionary income of a major Los Angeles drug dealer I would buy the new LG 84-inch Ultra-High Definition TV in a heartbeat. I am the fool for Christ and the Paraclete of Caborca, and I eat this shit up. But how does it deliver 4 times the resolution of a standard 1080p HD device, which delivers 1920 pixels of width and 1080 pixels of height? Ultra High Def delivers 3840 pixels wide x 2160 pixels high. So cut the three-card-monte bullshit — it doubles the visual density, not quadruples it.

The only way you can really savor the difference, I’m presuming, is by watching Blurays, and even then…

If I had the time and the mad money I’d fly to the Consumer Electronics Show in Las Vegas and check these sets out. They also come in widths of 55 and 65 inches.

Finding out how much one of these 84-inch units cost requires only slightly less investigative work than Maya’s effort to discover the whereabouts of Osama bin Laden. They tried to pull the wool over but I kept on plugging and finally wore them down. The price is $17 grand with free delivery and a one-year warranty.

So you really do have to be a drug dealer who lives for the flash and the bling. Or you have to be David Geffen or Jonah Hill or Steven Spielberg. I know that Scott Foundas would probably appreciate the visual benefits of the 84″ device much more profoundly than Kim Kardashian, but you know he’s not ordering this puppy anytime soon.

How much will these sets go for in two or three years? Less than $10K, I’m guessing. I own a 50″ Vizio 1080p that cost me $500 and change when I bought it in March 2011 because the box had been damaged. Two of the HDMI inputs don’t work, but otherwise it’s been fine.