An invitation received earlier today for an Inside Llewyn Davis Cannes luncheon (mum on the particulars) may indicate the look of the official ad art. 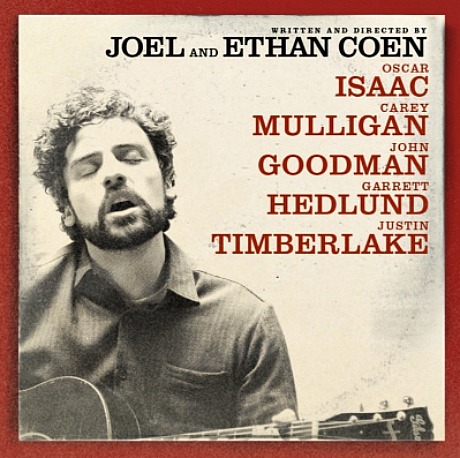 “Don’t believe the hate,” says Marshall Fine about the critically-pummelled The Great Gatsby. “It’s not a terrible film; indeed, it’s a surprisingly affecting one. And I’m no Luhrmann apologist. I’m one of those who thought Moulin Rouge was silly and overrated. As for his indigestible Australia from 2008, well, at least the continent itself survived.

“Yet I found myself pulled into the emotional world of Luhrmann’s Gatsby despite only a couple of really outstanding performances and an in-your-face phoniness to the imagery which the film wears as a badge of honor. In translating F. Scott Fitzgerald’s novel about the 1920s, Luhrmann turns it into an indictment of conspicuous consumption and the erosion of the human spirit that inevitably results.

“In spite of the trappings of 3D and a Jay-Z-infused soundtrack, Luhrmann finds the beating heart at the center of this overstuffed enterprise. It rests firmly in the person of Leonardo DiCaprio’s Jay Gatsby, who single-handedly breathes life into a film that is nearly sunk by the glum Carey Mulligan and the lightweight Tobey Maguire.

“DiCaprio’s Gatsby is still an untrustworthy weasel with delusions of grandeur and a willingness to do almost anything to get what he wants — but his collapse, when that ruthlessness proves his undoing, is that much more moving because of the heft DiCaprio brings to the role. See it for DiCaprio and you won’t be sorry.”

I was suffering from sleep-deprived midday fatigue all through today’s drive back to Berlin. Mr. Sandman wouldn’t quit trying. I doused my eyes with Murine, bought two Red Bulls at a rest stop and chugged them down, and sharply slapped myself on the face a dozen or so times. But at least the ordeal yielded three extremely gripping video clips. I’m kidding, of course — they’re tedious. But this is what it was.

8 Comments
Back To Berlin

It’s 9:55 am and I now have to get in the car and begin the three-hour drive back to Berlin. What have I been doing in Bad Grund, Germany for the last 40 hours? I can’t say until late June. I can only divulge non-explicit incidentals. Green forests and hiking and sitting in outdoor plazas and ordering salads and hanging out and filing stories in a big breakfast room. I can’t say much more than that. Them’s the rules. Update: In an absolutely non-related development, here is today’s front page of the Harz Kurier. 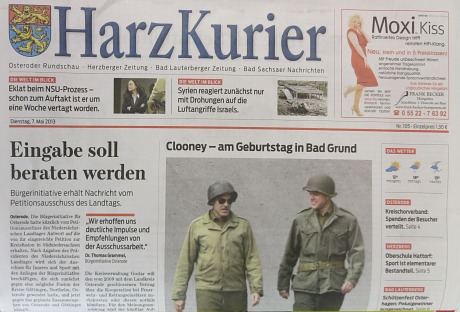 I’m fairly certain that before too long Hollywood Elsewhere will be two-thirds of a traditional reading experience, and one-third of a you-are-there, it’s-all-happening-right-now Google Glass experience — a video camera mounted on my glasses with a live feed going straight to an HE live screen and showing whatever’s going on — whatever’s being seen, heard and said in a walking-around social context (events, premieres, screenings, parties, interviews and randoms minus the private stuff.)

I honestly believe this will start to happen by late 2014 or mid-2015 at the latest. I think that just printed material, photos and videos won’t be enough. People will want more immediacy, direct access — something vaguely akin to a Being John Malkovich experience.

In a 5.16 N.Y. Times story about Google Glass by David Streitfeld, attorney Karen L. Stevenson says that “we are all now going to be both the paparazzi and the paparazzi’s target.”

“Like Somewhere, The Bling Ring sneaks up on you,” Film Comment‘s Kent Jones has apparently written. (I can’t find the actual link but Sasha Stone has.) In other words, Jones is implying, Sofia Coppola‘s film doesn’t feel like that much at first…but then it gradually starts to. And then it does.

“Somewhere during the first visit to Paris Hilton’s house (if it isn’t the real thing, it could just as well be), you might find yourself, as I did, alternately charmed, mesmerized, and horrified by the lives of the characters and the homes they enter. Halfway through the film, Marc and Rebecca wander through what is supposedly Orlando Bloom’s open-plan house at night, viewed from an exquisite remove several tiers above in the Hollywood hills, the sounds of howling coyotes and wailing police sirens quietly echoing in the distance—a suspended spell of uncanny beauty, and one of the most beautifully lyrical stretches I’ve seen in a movie in ages.

“I’m not sure if Coppola’s film ends as satisfactorily as it might have — resolving a narrative about characters who lead unmotivated lives does present its dramatic problems — but I don’t think it matters all that much. Unlike Spring Breakers, with which the film will inevitably be compared (alongside Schrader’s The Canyons), The Bling Ring goes about its business quietly but with a tremendous purity of focus. The film casts such a lovely spell that its full force may hit only after the lights come up.”

In recognition of the just-announced 5.21 screening of a super-lustrous, digitally restored version of Joseph L. Mankiewicz‘s Cleopatra (’63) under the Cannes Classics program at the 2013 Cannes Film Festival, here again is perhaps the greatest (and certainly the funniest) red-carpet interview of all time. Mankiewicz vs. Bert Parks, sardonic fatalism, “guillotine about to drop,” etc.

On 5.22 Cleopatra will open for a limited theatrical engagement in 200-plus theaters around the world, followed by the release of the American-market Bluray on 5.28. Here’s a month-old trailer showing off the new restoration.

Except it’s not new. As I pointed out last March, it’s roughly 15 months old. In early 2012 20th Century Fox’s UK video arm issued the exact same Cleopatra Bluray. The British Bluray was called a 50th anniversary edition when in fact it celebrated the film’s 49th year, as it opened theatrically on 6.12.63.

I said in my 2.5.12 review that “if you can somehow make yourself ignore the elephantine, glacially-paced, dialogue-driven nature and just focus on the lavish Todd-AO splendor and large-format clarity, it’s a nice high-def bath.”

What’s with the “aaahh, crap…what is all this?” look on Bruce Dern‘s face? Older guys often wear this cranky expression. Fucking crap, getting older and older, my pants are too lose around my waist, eff me, I need a snort. My late father, who stopped drinking in his 50s, used to walk around with this pissed-off, crabby-ass attitude….”aaaahhhh!” He basically hated what age was doing to him. 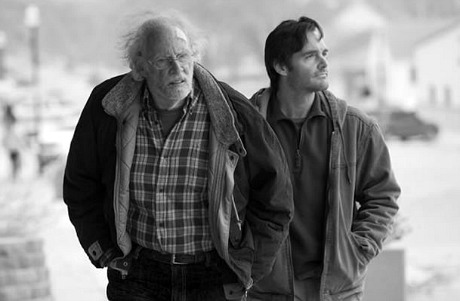 This is a still, of course, from Alexander Payne‘s Nebraska. It was released yesterday with a USA Today story about the film, which will have its big debut at the Cannes Film Festival.

“I had been sitting on this Nebraska script even when I did Sideways,” Payne tells Bryan Alexander. “But I didn’t want to go back to a road-trip movie right after that. I was really tired of shooting people in cars. I’m serious. It’s a drag. But after Descendants, I came back to this story.”

Payne tells Alexander that he shot Nebraska in black and white because it’s “cool…[it] just felt like the right thing to do.” That’s fine, Mr. Payne, but did you check with Vinny Bruzzese before committing to monochrome?