In one of the pettiest and most chickenshit parliamentary challenges in Hollywood history, Warner Bros. has successfully argued that (a) a forgotten 1917 short WB film called The Butler gives them MPAA-mandated ownership of the title, and that (b) the Weinstein Co. therefore has to come up with a new title for the Lee Daniels‘ film formerly known as The Butler.

In response Weinstein attorney David Boies has stated that “the suggestion that there is a danger of confusion between TWC’s 2013 feature movie and a 1917 short that has not been shown in theaters, television, DVDs, or in any other way for almost a century makes no sense. The award has no purpose except to restrict competition and is contrary to public policy.”

So let’s have some suggestions for new titles. The substitute title should convey the idea that an exacting, dutiful, conservative-minded White House butler (i.e., Forrest Whitaker) who has served under six or seven U.S. presidents is more than what he seems — a man of unrecognized importance and immense dignity whose life is historically profound on some level. Or something like that. Bad examples: He Who Polishes Silver. Good Night, Mr. President. Never Miss A Day. The Butler Did it. This is hard.

The responses to Stuart Blumberg‘s Thanks For Sharing at last September’s Toronto Film Festival ranged from approving to mezzo-mezzo, as currently indicated by a 54% Rotten Tomatoes score. I’d be on-board if it was just a matter of the appealing Mark Ruffalo (playing a recovering sex addict) and Gwynneth Paltrow (as a woman he begins a relationship with), but the horrific Josh Gad also cast as a sexaholic kills my interest completely. Gad is excessive to begin with (he was fine in Book of Mormon on-stage but he all but torpedoed Love and Other Drugs). Why would anyone want to even briefly contemplate the idea of Gad having sex, much less watch a film in which he deals with sexual addiction? What kind of demented death wish led Blumberg to cast him?

Ken Scott‘s Starbuck (’11) has seemingly been Hollywood-ized and Vince Vaughn-icized, but with Scott directing. As I recall Patrick Huard‘s “David” picked up a lot of money over several months due to prodigious donation. But in the Vaughn version a sperm-bank “mixup” results in 533 women being fertilized. Even if you’re talking…what, half a syringe or one-third of a shot glass per woman, wouldn’t several pints if not quarts be necessary to impregnate 535? Sorry, but these questions have to be raised. The Delivery Man opens on the 50th anniversary of the assassinaton of President John Kennedy.

12 Comments
Greatest Man-Child I Ever Knew

Sterling Hayden and I had a few friendly encounters in ’77, ’78 and ’79 — twice on the set of Frank Pierson‘s King of The Gypsies and two or three times at his home in Wilton, Connecticut, where I went to high school for two years. I loved him because he reminded me of my eccentric grandfather on my father’s side, and because he was one the most emotionally vulnerable guys I’ve ever known. Vulnerable and yet brusque when he needed to be. Literally twitching with this or that source of guilt, uncertainty or existential angst. Ignore the beginning and start at 2:40 — and just listen to the man. 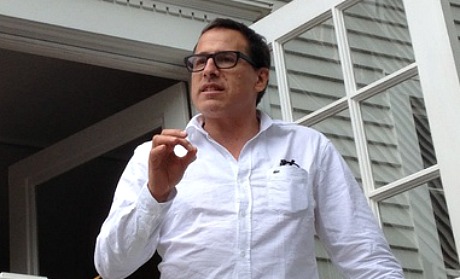 No film reduces me to mush like The Wizard Of Oz. Every damn time. It’s that vulnerable, open-hearted, lay-it-down Judy Garland performance. (She really meant and felt every line.) Bert Lahr and Jack Haley‘s New York accents have been making me chuckle or decades. And those song lyric rhymings. “For nearly forty years this story has given faithful service to the young in heart, and time has been powerless to put its kindly philosophy out of fashion.” I know that seeing it in IMAX 3-D is going to be at least interesting. The 2D version will always be there.

This film gets better and better the more I think about it. A legendary work always does this. Initial viewing yields high pleasure and satisfaction but you’re not quite levitating. Then it kicks up the next day. Two weeks later you’re telling everyone you meet about it (even cab drivers). Two months later it’s really gotten better, and you’re telling yourself “this is so good that the Academy will probably ignore it.” Wait…am I setting the stage of an Inside Llewyn Davis backlash?