An actual obit that some Breaking Bad fans put into the Albuquerque Journal. Everyone’s already reported this today but I figured I might as well join in as Hollywood Elsewhere has become a kind of emotional Ground Zero for fans of this now-mercifully-concluded AMC series. Bonus points for those who can remember which “deceased” actor in which film was referred to as a “tough monkey” after his demise? 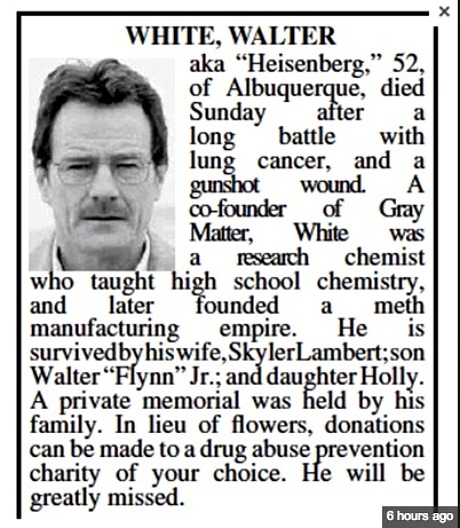 With the post-apocalyptic dystopian thing completely spent and in the wake of Cloverfield and Pacific Rim, who outside of 14-and-unders wants to watch more of this?

Directed, written and produced by Linda Bloodworth Thomason, Bridegroon (Virgil Films, 10.4 in NYC/10.18 in Los Angeles) is about how tragedy separated a committed gay couple, Shane and Tom, and then how Shane Bitney Crone, the survivor, was stunned and angered when faced with familial and “legal” anti-gay prejudice. Shane posted a video tribute to his partner called “It Could Happen to You.” The video went viral and garnered over four million views. A release states that Shane “wanted it to serve as a warning to other LGBT couples, and show the world what can happen when two people are legally barred from having equal rights and equal protections under the law to marry.” I’m attending a screening of Bridegroom on Tuesday, 10.15, at the Academy theatre.

The sound on my Macbook Pro sound stopped working yesterday due to a faulty installation of OSX 10.8.5. So I had to re-download and re-install that system and then restart, blah blah. The sound was fixed. And then, at the Apple guy’s suggestion, I went into all three cache folders and emptied everything out. (Which I should do every week except I forget.) This somehow killed the sound again. Plus the operating system is slow and gunked up. I made an appointment for tomorrow afternoon to drop off this soundless Macbook Pro plus the other broken MBP (i.e., faulty keyboard) to the Geniuses at the Mac store at The Grove. (Which I despise, spiritually and environmentally, because of that phony bullshit Disneyland vibe.) On top of which the four-year- old iMac that I bought in Manhattan is all but worthless. So everything is basically breaking down from overwork so I’m thinking I need a new Macbook Air. It may sound fickle but I need a computer that, you know, works, especially with the two Pros being in the shop for two or three days.