Criterion’s recently released Bluray of Michelangelo Antonioni‘s La Notte (1961) is damn near perfect. I don’t even have a beef with the l.85:1 aspect ratio, even though my eyes were crying for 1.66 all through the viewing. But the bottom third of the subtitles are chopped off, and don’t give me that “there’s something wrong with the calibrations” crap. Everything looks dead-perfect with every other Bluray I’ve watched on my 60-inch Samsung plasma (except for the grainstorm-afflicted — let’s not go there now). The aspect ratio of the screen, of course, is 16:9 or 1.78:1, and the 1.85 image is sliced off precisely as it should be on the tops and bottoms. And I can read the subtitles, but it’s weird that a portion is missing. 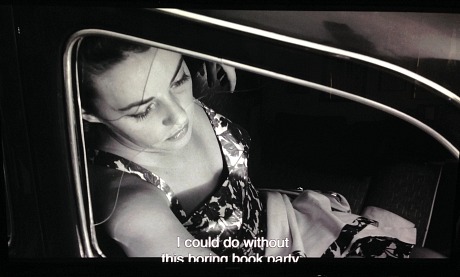 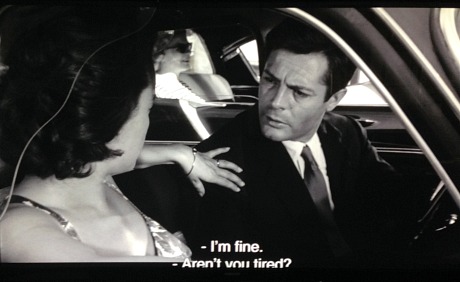 It was almost exactly ten years ago when I was asked by Razor magazine to tap out a profile piece on Mulholland Drive costar Laura Harring. Yeah, I know…”who“? But she was kind of happening back then. Razor wanted one of those Esquire-style “Women We Love” pieces, but editor Craig Vasiloff forgot to convey that in advance. He asked for a soft rewrite after I turned my first draft in, and then killed it altogether because it wasn’t soft enough. I got a lousy $150 kill fee, or 10% of the original $1500 fee. Vasiloff caved in part over pressure from Harring’s manager. Harring felt that my including info about her past boyfriends was too invasive. 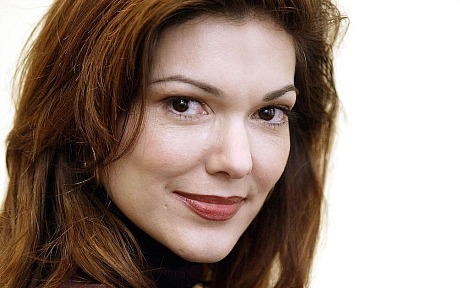 I’m mentioning this because I happened to re-read the article last night and I think it reads pretty well so here it is again. I’ve also included an account of the writing and killing of the pice by Luke Ford, which he posted in early December 2003. Here‘s the piece that never saw print except when I posted it on Movie Poop Shoot:

Almost dying has to have a big effect on how you live your life. It has to shake you up and teach you to not be content with drifting along, but to live it, senorita…really live it.

When she was 12, Laura Harring was shot in the head. Grazed, actually, by a bullet that hit the top-right portion of her skull but missed her brain by a millimeter or two.

National Public Radio’s website is offering a free listen of the Inside Llewyn Davis soundtrack. You have to click the shit out of them but the tracks eventually play. The standout tracks are Oscar Isaac‘s performance of “Hang Me, Oh Hang Me” and Davis, Justin Timberlake and Adam Driver‘s recording-studio performance of “Please Mr. Kennedy.” The latter may not sound like a corker but it is, trust me, in the context of the film. You had to be there when this scene played during Inside Llewyn Davis‘s first showing at the Cannes Film Festival — the crowd almost started clapping along. 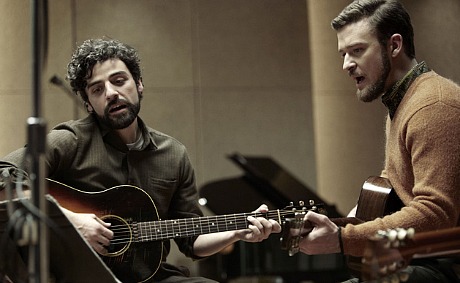 6 Comments
Slow On The Pickup

Here’s another taste of Judi Dench‘s performance in Stephen Frears‘ Philomena (Weinstein Co., 11.27), which I saw and reviewed at last September’s Toronto Film Festival. (I’ll be seeing it for the second time tomorrow night.) Ignoring words and going into gentle denial is part of a boilerplate “older uneducated lady from the provinces” schtick that Dench decided to use for her performance as the real-life Philomena Lee. Variety‘s Scott Foundas recently disgreed, calling her performance “complex and interesting in unexpected ways…Dench gets so deep under the skin of the part that I almost didn’t even recognize her.”

AFI Fest guest programmer Agnes Varda has chosen to screen Martin Scorsese‘s After Hours on 11.13. I can’t attend this 11 pm screening, but a high-def version is rentable on Vudu. The clip below triggered three thoughts. One, the simple observational minutiae in this scene (the 1985 green-font computers, the suits, the haircuts, the sense of ennui and distraction) shows how good Scorsese is at just noticing stuff. Two, it’s precisely this kind of stuff that gets dumped when you’re told to trim the length of a film, which is why it may not turn in up in Wolf of Wall Street. And three, Griffin Dunne‘s supporting performance as a Mexico-based cancer healer in Dallas Buyer’s Club is the best thing he’s done since After Hours — 28 years of waiting for the next good role.

FilmDistrict recently allowed “interview press” to see Spike Lee‘s Oldboy (11.27), and one result of that largesse is a four-day-old L.A. Times Steven Zeitchik interview with the film’s star, Josh Brolin. I read it because FilmDistrict is being a little cagey about screening Oldboy, which indicates, of course, that it blows. Zeitchik’s piece contains three tell-tale hints. Zeitchick describing Brolin’s character, Joe Doucett, as “an unrepentant jerk” is an obvious red flag. Ditto when he says the film has “a dark baroque quality that will likely alienate some critics.” (I thought “dark and baroque” tends to attract critics, no? Guys like Aaron Hillis, I mean.) And it definitely means something when Brolin himself says of Oldboy that “I have opinions, but it’s better to bite my tongue“…aarrrgghhh! He also tells Zeitchik “he was more enamored with Lee’s earlier three-hour director’s cut that was both quieter and filled with more character-centric moments.” Maybe the three-hour Oldboy will turn up on Bluray some day? Is Lee’s Oldboy the new Once Upon A Time in America — a film that was much better before the distributor stepped in and removed the poetry and basically dumbed it down? The campaign to persuade FilmDistrict to release the three-hour cut starts here.

I don’t want to think how long ago, but I remember it like yesterday. I was talking to a neighbor in my Santa Monica apartment building (948 14th Street) and he was recalling a story about a woman he knew being “out to lunch” and I immediately said “literally or figuratively?” And I remember feeling pleased when he chuckled at that. And this morning it suddenly hit me that I haven’t heard “out to lunch” used in that context for a long, long time. And that it might be one of those expressions that have just slipped into the ether, never to return. The language does this. New expressions arrive like babies every day, and for the language to breathe and thrive certain expressions have to die to make room. Another one I haven’t heard in a dog’s age is “the lights are on but nobody’s home.” But you can’t fight natural selection. The language has to make way for new stuff like nature’s boner, peefurbished, motorfloating, birth vegan and wash the cat.