Support on Patreon Follow @wellshwood
27 Comments
Grimming Up For Silence

I’ve never been that excited about Martin Scorsese‘s intention to direct an adaptation of Shusako Endo‘s “Silence,” which is set in 16th Century Japan. I’m afraid it will be a kind of Christian Kundun. I’ve always had a basic aversion to all things Christian (at least since my early 20s) and I nod out every time I see a movie about historical Japan. Is Silence going to be a solemn downer with torture scenes? A melancholy tale of martyrdom? I only know that my insect antennae are picking up signals along these lines.”

That aside, today’s announcement that Liam Neeson will star in the film is the best thing to happen to his career since he became an senior action star in ’08 with Taken. It will be Neeson’s first top-tier dramatic role (it’s presumed he’ll play a fallen Jesuit priest named Ferreira) since Kingdom of Heaven. Andrew Garfield, Ken Watanabe and Adam Driver will costar.

Nobody remembers Richard Franklin‘s Link (’87), but it was a witty, better-than-decent genre thriller. Nicely acted by Terrence Stamp and Elizabeth Shue, fairly well written by Everett De Roche, very carefully composed. Franklin (who died in ’07) shot it with a kind of Hitchcockian discipline. I wrote the press notes and in so doing interviewed Franklin, and he worked very hard, he told me, to put Link together just so. It was filmed in Scotland but it’s certainly not a “horror film,” as the Wiki page states. It’s a tongue-in-cheek thing, clever and dry. “Link” is a chimpanzee in the film but he was played by an orangutan with a dyed coat. I helped out with Link screenings at Cannon headquarters on San Vicente Blvd., and I remember playing The Kinks “Ape Man” (a portion of which is heard in the film) as a kind of overture for invited guests. Consider Walter Goodman‘s N.Y. Times review.

There’s something almost thrilling about entering a clean and tidy hotel room for the first time. You feel refreshed, renewed — almost like starting your life over. And then you unpack and turn on the computers and the TV. You start personalizing the place in various ways. And within an hour or two the room has become almost exactly like your home. Nothing special or exotic — the toys and ornaments of your life have simply been transferred to another location. The thrill is gone. Your not-entirely-fastidious living habits are the same. Not that there’s anything wrong with that. Your life is your life.

55 Comments
Genuinely Sorry About This

I’ve never related to Gov. Chris Christie‘s blustery pugnacious manner, but on some perverse level I don’t mind it. I’m a New Jersey guy from way back so I get that kind of personality. At least Christie isn’t a blow-dried phony — he is what he is. And he’s a kind of moderate Republican, at least compared to the Tea Party wackos. (Okay, maybe he isn’t.) I was really looking forward to a highly combustible presidential primary battle between Christie and Rand Paul, and particularly a contest between Christie and Hillary Clinton for the White House itself. I guess that’s not going to happen now. 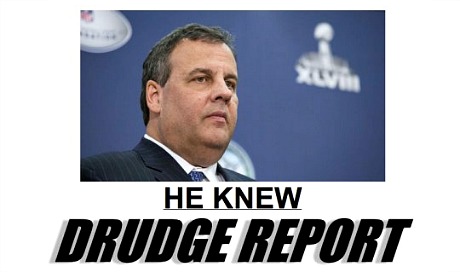 This Bud Light commercial is about the preponderance of empty external stimuli in the 21st Century, and how all of it culminates in a paralyzing state of ennui and nothingness that would reduce Immanuel Kant (if he could be brought back to earth and put into this situation) to tears and pleading. And I’m not making this association because a place where I’m staying in Berlin next week is located on Kantstrasse. Ian is a gleeful, highly impressionable dolt. If it had been me I would have taken one look at that wine-colored stretch limo and that DJ in the back and stopped smiling immediately.

“Take Jake Gyllenhaal‘s lonely OCD decoder in Zodiac and [then] split him in two with one version schlumpy and Adam Goldberg-like and the other like Ryan Gosling on a motorbike. Mix in Eyes Wide Shut‘s plinking/cagey ‘sex party’. [Use] talent agency and university settings as nondescript/sterile as the stockbroker firm in American Psycho. Throw a curveball with inexplicable video-store detours from ye olden times. Stir it all together for a Franz Kafka stew.

“Add a sprinkling of Isabella Rossellini and two blonde love interests — Melanie Laurent and Sarah Gadon — who are both confusingly disappointed. You’re sleeping with Gyllenhall, ladies. Cheer the fuck up!

“Do all that and you might get this eery, compelling, off-putting, possibly slight but mercifully tight (90 minutes) cinematic adaptation of Jose Saramago’s “The Double” (’02).

Jason Reitman‘s Labor Day (Paramount, 1.31), which I saw and reviewed five months ago at the 2013 Telluride Film Festival, has been all but decimated by critics. An abysmal 32% on Rotten Tomatoes, a not-much-better 52% on Metacritic. Here’s my 8.29.13 review, which was titled “Reitman’s Film Doesn’t Work”:

Jason Reitman‘s Labor Day is a decently crafted, amber-lighted period drama, based on the 2009 Joyce Maynard book and set during the Labor Day holiday of 1987, about…well, it’s hard to put into a succinct sentence. It begins as a kind of home invasion situation that isn’t quite a hostage or kidnapping thing. It’s a family love story of sorts mixed with a criminal-hiding-out-in-the-home-of-a-single-neurotic-mom-and-her-son story.

“I asked Anne Hathaway about the Judy Garland biopic (based on Gerald Clarke’s 2000 biography “Get Happy“) that she and the Weinstein Co. have been developing for…what, three or four years? In 2010 she told a BBC interviewer that ‘it’s a very sensitive project…we’re really trying to get it right so we’re taking our time with it…very, very slow incremental steps.’ Hathaway told me that last August Harvey Weinstein told President Obama that the film would happen ‘within a couple of years.’ Hathaway is tallish (5′ 8″ but nearly my height with three-inch heels) and Garland, she said, was not quite five feet. So she’ll have to do a Marion Cotillard-in-La Vie In Rose (i.e., acting on large-scale sets with large-scale props).” — from a 12.15.12 post about a Les Miserables party at Spago. 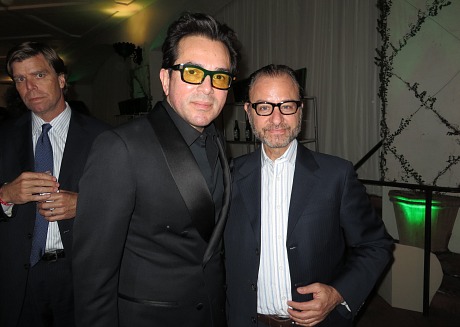 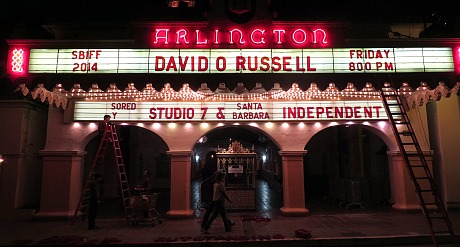 In a 1.30 piece about ways to avoid a repeat of the “Alone Yet Not Alone” slapdown (i.e., the Academy’s board of governors recently voting to rescind the Best Song Oscar nomination because of online campaigning by co-composer Bruce Broughton), Variety‘s Tim Gray has suggested something a little bit bizarre. Gray thinks the Academy should invite “Alone” singer Joni Eareckson Tada to perform on the Oscar telecast as a kind of makeup gesture (i.e., “we’re sorry for traumatizing you and your ‘Alone’ colleagues”). But considering Tada’s strongly Christian beliefs, Gray is also suggesting that inviting the quadriplegic performer would rebuff a notion that Hollywood rank-and-filers have an “anti-religious bias.”

That’s a red herring. Gray knows that religion and spirituality have been strong currents in the Hollywood community for decades. The “bias” he alludes to is not anti-religious — it’s anti-rightwing Christian. Which I think makes basic sense if you’re any kind of liberal. Or a genuine Christian, for that matter.

Hollywood has always been a lefty town, and most of us understand…okay, believe that Christianity, conservative values and rightwing political agendas have been more or less synonymous in this country for many decades. Gray knows all about this equation, and yet he’s suggesting that the film industry needs to turn the other cheek and perhaps atone on some level for not feeling a profound bond with conservative Christians. Good God! They might be nice people to chat with at a backyard barbecue in Lake Forest, but the rigid attitudes, political causes and cultural crusades of rightwing Christians have as much connection with the sermons of Yeshua of Nazareth as Edward G. Robinson‘s Golden Calf has to the stone tablets carried down from Mount Sinai by Charlton Heston.

Imagine if the Academy of Motion Picture Arts & Sciences was to announce a three-season award calendar — January 1st to April 30th, May 1st to August 31st, and September 1st to December 31st. And then require members to fill out sudden-death online ballots for the best achievements of season #1 (winter/spring) and season #2 (late spring & summer)? No nominations, no campaigning — just a simple popularity ballot. This would be coupled with two Junior Oscar ceremonies to announce and celebrate the winners of season #1 and #2.

I know the Academy would never go for this in a million years, but be honest — wouldn’t this approach encourage distributors to release better films between January and August? Wouldn’t this result in a richer, more nutritious film year with the “wealth” spread around more evenly? The winners of these seasonal award ballots would obviously derive some commercial benefit. Season #1 and #2 winners wouldn’t be eligible for the third and final season (Labor Day to New Year’s Eve), so this wouldn’t change award season as now know it. Everything would still start at Telluride/Venice/Toronto/New York. It would obviously make things better all around. I’m fairly certain this has been suggested before so I’m not claiming this as my idea. But it’s a good one.

If I were an Academy Napoleon I would push this plan through along with my reduce-the-influence-of-Deadwood-voters suggestion.

Update: The Hollywood Reporter‘s Scott Feinberg suggested a variant of the “Junior Oscars” in late 2012.

The post-apocalyptic wasteland scenarios in George Kennedy‘s Mad Max and The Road Warrior were fresh and wowser thirty-plus years ago, but they’ve been done to death. Animal Kingdom taught me to respect Aussie helmer David Michod, but what could The Rover possibly bring to the table? The trailer suggests it’s the same old dystopian sludge. Boilerplate synopsis: “In a world depleted of its food sources since the collapse of civilization ten years prior, two worn-out survivors (Guy Pearce, Robert Pattinson) try to stay alive in the Australian outback” blah blah.