I almost posted this earlier today (i.e., five or six hours ago) but the notion vaporized. Then I came home and decided if I don’t post this tonight it’ll be old news tomorrow morning.

“[Martin] Scorsese didn’t make The Wolf of Wall Street because he loves Jordan Belfort and wants us to drool over his money and drugs and women. He made it because he loves making movies, and Belfort’s story is great movie material. At its best, which is often, The Wolf of Wall Street reminds you not just of the glories of movies, and the sometimes false splendor and inner tawdriness of life itself, but the glories of other arts as well. I’m hyperbolizing, I guess, but for me the best of Wolf is not some glossy men’s magazine orgy but an attempt (mostly successful, I think) at a true work of art — a work visually dense and full of lif, like a painting by a Brueghel or a Bosch, rocking and propulsive like a big beat classic by the Rolling Stones (or the Ronettes), crammed with humanity like a novel by Balzac or Dickens, literate and street-smart like a play or a screenplay by Ben Hecht and Charlie MacArthur, tough and snazzy and stylish as a classic gangster movie or film noir by Hawks, Curtiz or Walsh. It killed me.” — from Michael Wilmington‘s brilliant review/analysis on MCN, dated 1.22.

These DVD Beaver screen captures comparing the 2004 DVD to the forthcoming Criterion Bluray (2.18) of Alfred Hitchcock‘s Foreign Correspondent (’40) tell the tale. There’s a bit more information on the top and sides of the Bluray version — more facial exposure on the guy with the bowler hat on the left, a larger slice of a khaki raincoat on the right, greater exposure of the trolley car window on top. Plus the frame captures don’t indicate appalling levels of grain. This in itself is enough to put me in state of tumescence. 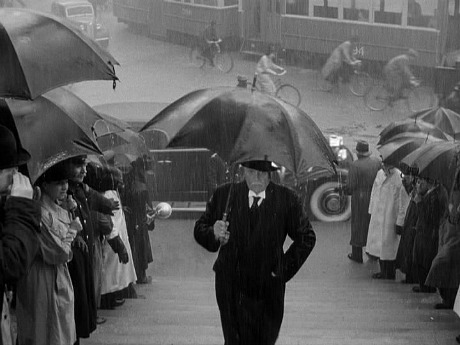 Prelude to the Van Meer assassination scene on the 2004 DVD — stolen from DVD Beaver. 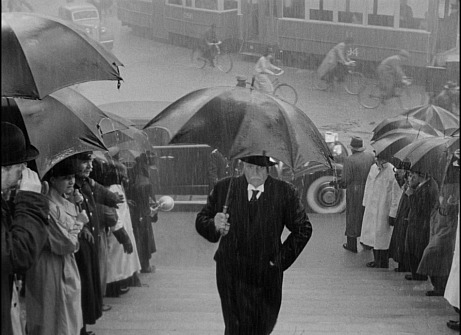 “I’m 31 now, and I’ve been through the worst of it. There’s nothing more that can be said about me, my movies or my collaborators that hasn’t already been said in a very negative, aggressive way. None of it hurts me anymore. I feel detached and liberated. I don’t even know Glenn Kenny. I know he’s someone out there who hates my movies. I don’t read what he writes or follow him on Twitter.” — ” — Happy Christmas director-writer Joe Swanberg in a chat with Fandor‘s Steven Erickson.

If anyone is able and willing to send along an actual, real-deal PDF of Quentin Tarantino‘s Hateful Eight screenplay (as opposed to the Seth McFarlane-authored screenplay that an unfortunately motivated asshole sent me last night), I’d be much obliged.

Via Rope of Silicon‘s Brad Brevet: “Richard Trammell is hopefully enjoying his new found Internet fame following his digital tinkering of David Fincher‘s Fight Club in which he scrubbed out Brad Pitt‘s Tyler Durden and today he’s keeping the theme alive as he set his sights on Stanley Kubrick‘s The Shining.”

I was handed some promotional baseball cards during Monday night’s dinner for Chapman and MacLain Way‘s The Battered Bastards of Baseball, “a wonderfully spirited documentary about a scrappy-ass, mid ’70s minor-league Portland baseball team called the Mavericks…that was owned and managed by character actor Bing Russell, the father of Kurt Russell.” One of the cards featured Russell, who was a designated Mavericks hitter and a kind of consulting co-manager. I asked him to autograph the card. I told Russell that I had attended and reported on a 1980 Manhattan press event for John Carpenter‘s Escape From New York, in which Russell played Snake Plissken. We all enjoyed a semi-drunken yacht party followed by a trip out to Liberty Island to watch Carpenter shoot a scene. Guess who one of the publicists was on behalf of the film? Indiewire’s Anne Thompson. “That was a really great time,” Russell said. 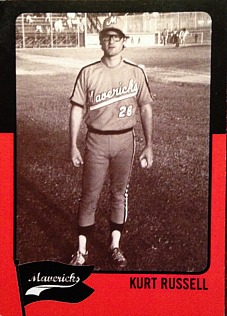 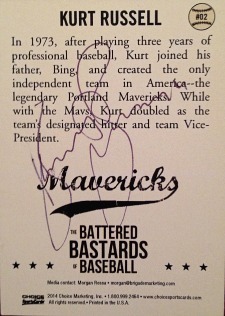 Allegedly “less procedural and more darkly comedic than other cop shows, Danny Boyle‘s Babylon (debuting in England on 2.9) is about (a) the “increasingly poor public image of a London police force led by a tight-lipped chief” (Jimmy Nesbitt), (b) an attempt at a p.r. makeover via the department’s new media liaison (Brit Marling), and (c) “a national firestorm triggered by the terrifying reports of a sniper on the loose.” Why isn’t this being shown at Sundance?

A 10.22 piece by The Wrap‘s Sharon Waxman declares that Sundance ’14 hasn’t delivered any “breakout buzzy” films. Not by my yardstick. I’ve seen five that easily qualify — Whiplash, The Skeleton Twins, Laggies, Boyhood and Life Itself. Plus I found The Battered Bastards of Baseball delightful (as well as obvious material for a feature if anyone wants to give it a shot). And you could add The One I Love for at the very least delivering a metaphorical observation about how relationships tend to evolve, etc.

Waxman claims that “while the festival had glimmers of excitement, the movies were — in the aggregate — interesting but not inspiring, thought-provoking but not thrilling” — nope.

On top of which Marshall Fine wrote this morning that the 3D The Girl from Nagasaki is “bold, experimental, engagingly weird…the most adventurously artistic vision I’ve seen in years. It’s destined to be a movie for critics, rather than audiences, I’m afraid, because the public appetite for more oblique entertainment simply doesn’t exist on the scale necessary for a 3D release in theaters.”

I missed seeing Jack Ryan: Shadow Recruit before Sundance (Paramount didn’t want to show it to me, I didn’t pester them about it) and now it’s dead. The word all along has been “not bad, not terrible but not good enough.” I probably won’t even see it in a theatre. At best I might rent the high-def version on Vudu but I can’t promise anything. 10.13 HE post: “Chris Pine as Robo-Ryan — Jacksnapper injected with video-game DNA. Seemingly related to Captain Kirk. Kenneth Branagh provides the robo-direction. David Koepp wrote the robo-screenplay. My, how sensibilities have changed since Clear and Present Danger came out in ’94 (i.e., the Pleistocene era).”

As I intend to see the longer, more explicit 2 and 1/2 hour version of Lars Von Trier‘s Nymphomaniac, Part 1 at next month’s Berlin Film Festival, I have no regrets about missing last night’s Sundance sneak of Nymphomaniac Part 1, which ran something like two hours plus. “So to recap, Stacy Martin has lots of sex while Charlotte Gainsbourg tells a story and Stellan Skarsgard lectures us about science, which in one sense would be short-shrifting the film and in another describes pretty much all you need to know,” reports L.A. Times guy Steven Zeitchik. “There are no shortage of story lines outside the movie. Is the graphic aspect a help or a hindrance at the box office? Will Von Trier’s infamous Cannes appearance a few years ago in, which he thought it funny to call himself a Nazi, work against him? And will the star attachments break the film out of the art house or just fill up some entertainment news magazine air-time with breathlessness about stars baring it all?” 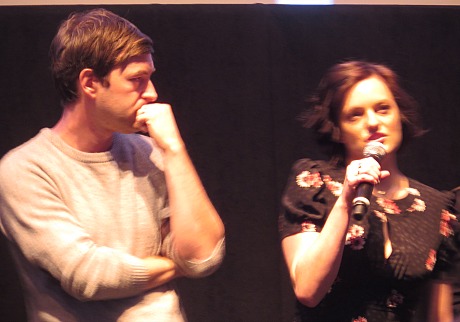