There’s a line spoken by Steven Keats in The Friends of Eddie Coyle (’73): “Life is hard, man, but it’s harder if you’re stupid.” (Here‘s the mp3.) By the same token it’s hard to make a half-decent crime film but it’s really hard to enjoy it if the leads are drop-dead stupid.

I don’t mean characters who could use a few more brain cells or are slow on the pickup. I mean characters who haven’t the common sense that God gave monkeys. This is a problem. I have to find a way to bond or empathize with characters if I’m going to spend a couple of hours with them, or at least make some sense of their motives. I’d like to able to roll with people who aren’t as smart as giraffes or wildbeests, but it’s not in me.

Imagine a couple of wildebeests, a male and a female who are….well, maybe a little impetuous but definitely crazy in love with each other. One afternoon they leave their herd and trot over to a shaded area where a family of lions are taking an afternoon snooze. For whatever dumbfuck reason they start taunting the lions, spitting and kicking and defecating. At first the lions are too bewildered to respond, but they eventually get up and tackle the wildebeests and eat them. Now that‘s a tragedy!

If someone were to make a documentary about this event, the copy line would be “those wildebeests might have done a dumb thing but they were so in love with each other!”

Raymond De Felitta‘s Rob The Mob (Millenium, 3.18 in NY, 3.25 in LA) is a fact-based story about those wildebeests. Crazy, irrepressible animals who lived in Ozone, Queens in 1992. Their names were Thomas and Rosemarie Uva (played by Michael Pitt and Broadway stage enchilada Nina Arianda). They had criminal records, drug issues (at least on Thomas’s part) and hell-bent inclinations, and so they decided to augment their income as bill collectors by knocking off a series of mafia social clubs. Insane behavior. Death wish.

You can’t really trust Variety critic Scott Foundas when it comes to superhero comic-book flicks. He’s a first-rate critic when it comes to real movies but put him in front of a CG-propelled fanboy package and Foundas is suddenly too generous, too obliging, too turn-the-other-cheeky. Have Variety critics been told by their editors to go easy on these films? That there’s no point in trashing Marvel/D.C. product because they’re basically thrill sausage — the movie equivalent of a Magic Mountain ride — so what’s the point? That aside and taken with a grain, Foundas has heartily approved of Anthony and Joe Russo‘s Captain America: The Winter Soldier, which I’ll be seeing tonight.

A January 1961 Twilight Zone episode called “Back There” and Stephen King‘s “11.22.63” asked the same question: if a person could go back in time, could he/she prevent a tragedy from happening or is history immutable no matter what? This is the dream of Matthew Kiernan. What films or franchise would HE readers try to prevent or erase if they could go back in time? Which actor’s or actress’s career would they like to smother in its infancy? I for one would try and stop the making of the Wachowski brothers‘ Speed Racer and the Keanu Reeves remake of The Day The Earth Stood Still,

I’m guessing that Todd Spence‘s Hardy Boys/True Detective mashups (posted yesterday on Break.com) don’t mean much to Millenials or Genxers, even. The Hardy Boys detective novels (written by a series of ghostwriters under the pseudonym “Franklin W. Dixon”) began in the late 1920s. They enjoyed their biggest popularity between the ’30s and the early ’60s, although the series was rebooted in the late ’80s and continues, for those lame enough to want to actually read them, today. The Hardy Boys were old hat in the days of Spin and Marty. They are to today’s YA books as Nelson Eddy and Jeanette McDonald musicals are to Les Miserables or the upcoming Annie. (Hat tip to Buzzfeed.) 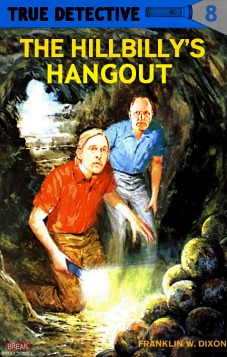 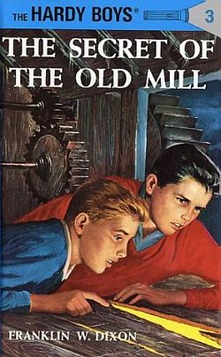