Some Esquire guys have suggested a few David Letterman replacements. Every since the announcement I’ve been thinking either Patton Oswalt, Louis C.K. or Ellen DeGeneres. Before his recent Spirit Awards emcee gig I would have recommended Oswalt but he might be a little too brilliant (i.e., original-thinking, challenging) for a late-night crowd. Not that Louis C.K. isn’t just as brainy as Oswalt, but his humor is wrapped in an oafish blue-collar package. He’ll never be truly uptown. I think he’d actually be perfect…seriously. Ellen would be a pretty good fit (I spoke to her at a party once and realized then and there she’s very fast on her feet), but she seems a bit too…easy-going? A little too daytime in her attitude and worldview? 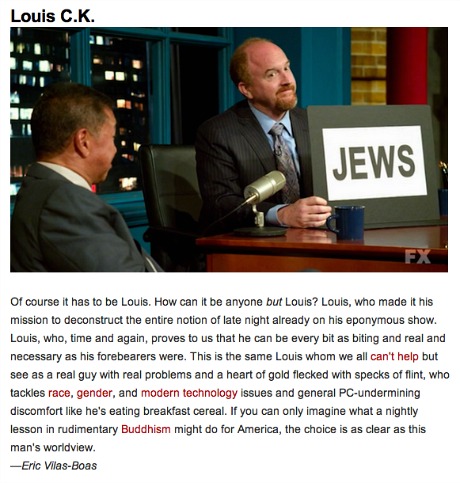 Three days ago, or on Wednesday, 4.2, the John Roberts-led Supreme Court decided by the usual 5-to-4 margin to eliminate limits on aggregate campaign contributions in the case known as McCutcheon v. FEC. “Many people watching the case had called it the sequel to Citizens United,” the Washington Post‘s Jamie Fuller wrote the following day. “However, it’s more like the latest, inevitable film of an unending franchise. McCutcheon v. FEC is probably more like the Saw IV of campaign finance, at least as far as reformers are concerned. For those who agree with the Supreme Court’s latest decisions, McCutcheon v. FEC is probably more like the latest Land Before Time movie — returning us back to a land with founding fathers and without election filings and regulation.”

Ryan Murphy‘s adaptation of Larry Kramer‘s The Normal Heart (HBO, 5.25) looks pretty good. Possibly more than that. Perhaps it’ll turn out to the best gay-themed, era-capturing drama since Tony Kushner‘s Angels in America, also an HBO presentation. (Or not.) Brad Pitt producing, Julia Roberts costarring, Roberts’ husband Danny Moder handling the cinematography, etc. Two observations: (1) Mark Ruffalo‘s lead performance (i.e., “Ned Weeks” a.k.a. Kramer) might be the meatiest role he’s had since Zodiac and perhaps the most emotionally affecting one he’s played since You Can Count On Me…maybe; (2) Taylor Kitsch‘s career seemed doomed after his 2012 trifecta of calamity (John Carter, Battleship, Savages) but he performed honorably in Lone Survivor and now he’s got a strong supporting role in The Normal Heart. The WME agent who put Kitsch into Carter/Battleship/Savages came close to literally killing the poor guy.

I’m no authority on webcams but Skyline webcams seem a bit more than a cut above. They’re almost thrilling. Clear, fluid, real-time video of schlumpy, sandal-wearing tourists walking around and snapping photos and throwing slices of half-eaten pizza in garbage cans. Dusk has been falling for the last hour or so (it’s now 8:35 pm over there) with the street lights glowing brighter and brighter. Mostly Central and Eastern Europe (no cams in the British Isles, France, Germany, Switzerland or Russia, not to mention Asia, Australia, South America or the U.S.) with a special focus on Italy. Webcam technology is obviously leaps and bounds beyond where it was 10 or even 5 years ago. Sklyine’s cameras are only planted in the usual tourist spots and the Italian Skyline guys are using the wrong lenses, resulting in a horizontal taffy-pull effect. Here’s (a) the town square in Perugia, (b) Rome’s Piazza Navona and (c) Trevi fountain. 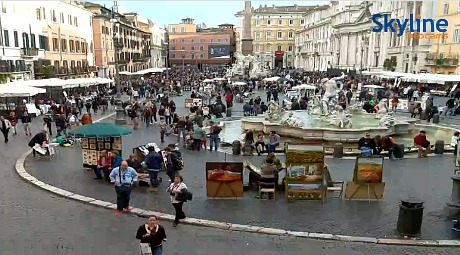 Please respond clearly and concisely to the following hypothetical: You’re living in a Movie Godz police state and have just been told by a high governmental official that you and/or your children will never be permitted to see Disney’s Maleficient (5.30). Not in a theatre, not on Bluray, not streaming, not in an airplane…you will never see this movie during the remainder of your time on this planet. Please explain how your life will be in any way lessened or diminished. You have 30 minutes to complete this essay. When the buzzer rings, I want you all to put your pencils down — no exceptions. Bonus question: Which current or past films should be added to the no-see list?