I’m really glad I got to see Bridges of Madison County before it closes on 5.18. It was recently nominated for four Tony Awards but not for Best Musical, and that apparently sealed its fate. Is it a great musical? Perhaps not but it’s a deeply moving one. Like the 1995 Clint Eastwood-directed film version, it’s about the kind of brief passionate love that can’t last (but good God, the sex!), followed by a sense of irretrievable loss lasting a lifetime and perhaps beyond. I’m sorry but that shit gets me every time. The Tony-nominated Kelli O’Hara is sadly mesmerizing as the unhappily married Francesca (i.e., the Meryl Streep role) but I was actually a bit more touched and affected by Steven Pasquale‘s Robert, the hunky National Geographic photographer whose brief affair with Francesca is the raison de la tragedie. Jason Robert Brown‘s score (also Tony-nominated) melted me down on at least four or five occasions. The singing and the staging and the sets…all first-rate. Marsha Norman‘s book delivers, I feel, a more complex and affecting tale than the film version did. The best musicals cut right to the core of life’s passages — the grieving, longing, needing, hoping, hurting, weeping and all the delights. And when they connect it’s amazing. Some primal part of you comes alive and some special beating of your heart kicks in, and suddenly the world feels more vibrant and teeming with feeling. That’s what happened tonight — an extraordinary emotional experience. My son Dylan, 24, wasn’t as affected but that’s to be expected as he doesn’t get/like the musical form. Tomorrow I’m seeing Bryan Cranston in All The Way…can’t wait. 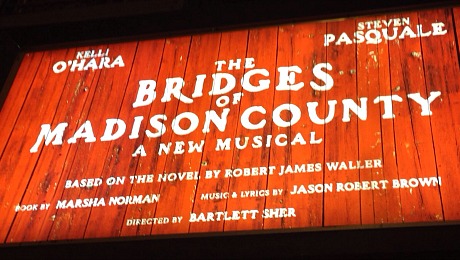 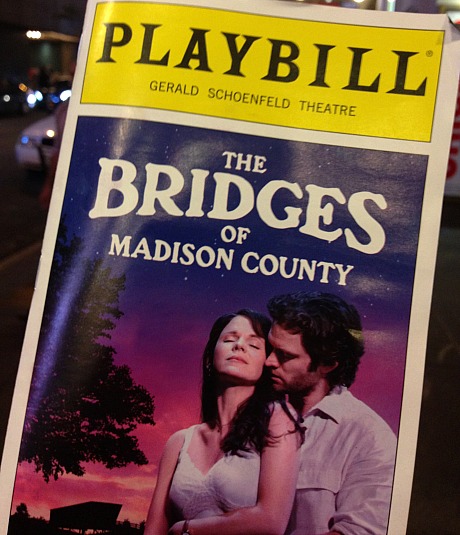 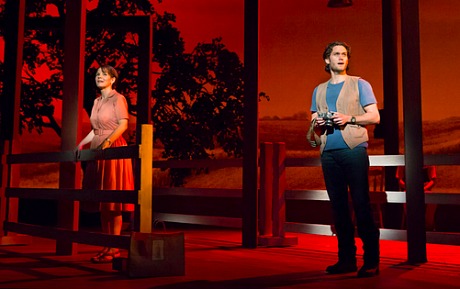 The fact that Clint Eastwood‘s Jersey Boys (Warner Bros., 6.20) has been selected as the closing-night film for the Los Angeles Film Festival on June 19th, or 12 hours before it opens nationwide, says something. If the film had been chosen as the festival opener, fine, but the closer? Why didn’t Warner Bros. offer it as a non-competitive Cannes entry? Where’s the confidence, guys? I’m not saying Jersey Boys might not work as a film. My 4.17 response to the trailer was that “it’s obviously going to play it right down the middle and maybe feel a little old-fashioned, but it’s going to be at least half-decent.” But the LA FilmFest booking tells me it’s a little soft. Pic stars John Lloyd Young, Erich Bergen, Michael Lomenda, Vincent Piazza and Christopher Walken.

Deadline‘s Nancy Tartaglione is reporting that Millenium Films prexy Mark Gill is staging a huge Cannes Film Festival Expendables 3 press day on Sunday, 5.18. Sylvester Stallone, Jason Statham, Arnold Schwarzenegger, Mel Gibson, Harrison Ford, Wesley Snipes, Antonio Banderas, Dolph Lundgren, Kelsey Grammer and three other actors no one cares about will arrive at a Carlton Hotel press conference in tanks, believe it or not. Director Patrick Hughes will also attend. Here’s a weird suggestion for Hughes and Gill. In addition to all the hoopla, how about devoting a portion of this energy to delivering a good film? I know, I know…that’s something only a party-pooper would say. Can anyone imagine Harrison Ford agreeing to costar in something like this ten or even five years ago?

Time Out‘s Tom Huddleston says “there’s plenty of fun to be had” from Burr Steers‘ Gore Vidal: The United States of Amnesia (Sundance Selects, 5.23). “Vidal’s observations on everything from civil rights and JFK to Afghanistan and Iraq are informed, wise and often bleakly funny, while the snippets of his 1968 television debates with right-leaning loonball William F Buckley are downright hilarious. [And] the stars queue up to fawn over Vidal, from celebrity chums like Tim Robbins and Sting to intellectual rivals such as Norman Mailer and Christopher Hitchens, who Vidal proudly proclaimed as his ‘heir’ before they fell out over US foreign policy.

“But the film’s blanket refusal to question its subject feels not only cowardly, but antithetical. Here was a man who questioned everything (except, perhaps, his own rectitude); who opened every dark door and peered inside. By refusing to do the same with their subject’s life and opinions, the filmmakers do him a disservice.” 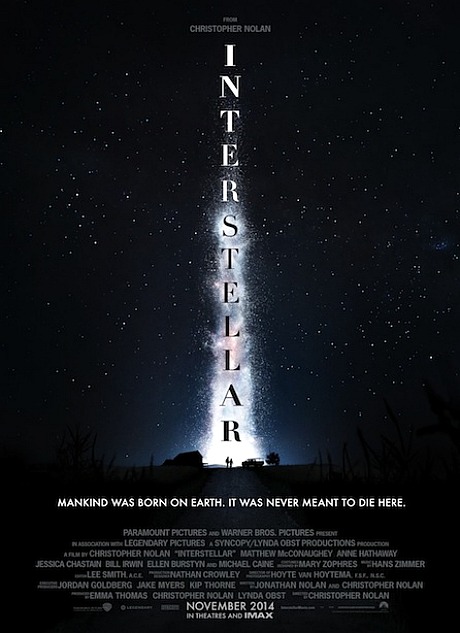 In the comment thread for yesterday’s piece about Bob Furmanek‘s “The First Year of Widescreen Production” (which, again, I think is admirable for its comprehensive historical precision), an under-informed pisshead reader named “Michael” wrote the following: “Thankfully, nobody who releases films gives a shit about what Jeffrey Wells thinks about aspect ratios.”

.
This morning I ran the following reply:

“Actually, Michael, my view does hold some sway. You might want to check with Warner Home Video and George Stevens, Jr. (and Woody Allen, for that matter) about how the restored Shane was released on Bluray last year. Before I stepped into the fray in late March 2013 and singlehandedly led a “boxy” rebellion, that 1953 classic was slated to be mastered on Bluray at 1.66.

I’ve naturally averted my eyes and mind whenever a mention of the Michael Bay-produced Teenage Mutant Ninja Turtles reboot (Paramount, 8.8) has surfaced. But a just-released photo of Megan Fox in a Turtles scene reminds me of two things: (a) Fox has obviously made up with Bay after he fired her off Transformers: Dark of the Moon five years ago for comparing him to Hitler, and (b) Fox’s career never really recovered from the combination of that whacking plus the disappointing reactions to her starring role in Jennifer’s Body and costarring performance in Jonah Hex…all in ’09. She fared relatively well with her supporting/cameo roles in Judd Apatow‘s This Is Forty and Sacha Baron Cohen‘s The Dictator (both in 2012) but to me Fox taking a starring role in the Turtles reboot is a metaphor for her career not having worked out. Obviously a paycheck move but one that also says “this is the best I could do so I took it, hoping for the best.” Fox is presumably loaded and healthy and doing fine in many respects, but it’s noteworthy that both she and Shia Labeouf (her costar in the original 2007 Transformers) have run into serious potholes since. 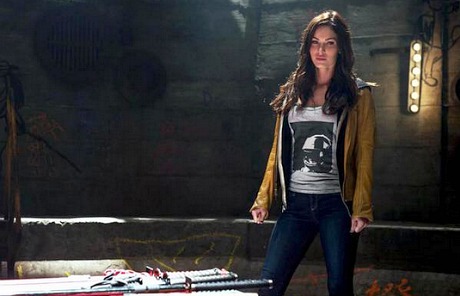