Here‘s an interesting excerpt from Paul Seydor, Julie Kirgo and Nick Redman‘s commentary on the Twilight Time Bluray of The Train. They’re basically saying that 21st Century moviegoers are completely accepting of action feats that no one outside of cyborgs would be able to do in any realm governed by the laws of physics. Even people in the best of shape (i.e., X-treme sports champs) get tired and bruised and can only handle so much. They’re capable of this and that but they’re made of flesh, blood and bone. And yet vulnerability is something you rarely see in films these days. That, again, is due to the ComicCon influence, and that is why someday you will see certain producers and directors facing charges in the cinematic equivalent of the Nuremberg War Crimes trials. I can’t wait to prosecute. Here, again, is the mp3.

The recent European Union ruling that granted citizens the “right to be forgotten” from Google’s search engine surprised me when it was announced three or four days ago. I thought the power of the web assured that everything that was ever recorded would be eternally available to everyone — nothing redacted, no edits or omissions, open access forever and ever. And then suddenly the European Union says no — people have a right to bury certain skeletons and keep them buried, and that the solace which may or may not result from a certain sliver of their personal history being forgotten is to be respected. Presumably this new consideration doesn’t apply to sexual predators or war criminals on the lam, but otherwise there’s something compassionate about declaring that people are entitled to be left alone about past mistakes and embarassments. We all suppress unpleasant memories but who doesn’t have an episode or two they’d like to erase from the public record?

Did any HE regulars even see Tammy this weekend? It was so universally dismissed by discerning types as well as regular CinemaScore Joes that I would be surprised…what do I know? The word “dead” doesn’t mean financial ruin. It means that the movie doesn’t matter. No importance to anyone, not in the conversation, evaporated, etc. Melissa McCarthy has to move beyond the coarse schtick or she’ll be in trouble two or three films down the road. Tammy cost $20 million to make and will earn just shy of $33 million by this evening. But only $21 million by the strict Friday-to-Sunday standard. Compare this to the $34 and $39 million earned by Identity Thief The Heat on their respective opening weekends.

The Twilight Time Bluray of John Frankenheimer‘s The Train is pretty wonderful, but I was expecting that. There must at least 737 separate shades of gray and silver in this thing, not to mention the inky, to-die-for blacks. I’ve listened to Frankenheimer’s audio commentary (originally recorded for the old MGM/UA laser disc) a couple of times now. The Bluray offers fresh audio commentary from Paul Seydor, Julie Kirgo and Nick Redman. At one point Seydor or Redman (couldn’t tell which) quotes from Kate Buford‘s “Burt Lancaster: An American Life“, in which she noted that “the seducer Elmer Gantry and the control freak J.J. Hunsecker were closest to who Lancaster really was while the Birdman of Alcatraz character was the man Burt wanted to be.” As for the clip below, the best reaction shots happen when a character hasn’t time to react.

If it’s a choice between the occasionally caustic or callous Joan Rivers and CNN’s Fredericka Whitfield, I’m definitely with Rivers. At least Rivers is honest while Whitfield is my idea of a smiling corporate hatchet woman, pretending to be all alpha and perky and lah-dee-dah. Consider that crocodile smile and that half-animal, half-bird sound she makes when Rivers accuses her of being a hypocrite….”Nahhoo!” Whitfield might be the person she’s pretending to be or she might be something else, but she’s definitely putting on an act. In Rivers’ mind wearing leather shoes, eating hot dogs and wearing a fur coat are all equal sins in the eyes of PETA, and besides her fur coat is 15 years old so it’s okay. In July? It’s not the age of the coat but the metaphor. Wearing a fur coat is like wearing a necklace made of dried ears.

Way back on July 3rd (three days ago!) Movieweb.com‘s B. Alan Orange, which sounds to me like a fake name, passed along a possibly valid but nonetheless curious (i.e., possibly INSANE) allegation from “an anonymous source deep within the Batman vs. Superman: Dawn of Justice production.” The tipster claimed that an alleged shooting script (which contained “four new villains alongside Lex Luthor”) which had recently surfaced on Badass Digest is (a) fake — an alleged attempt to hoodwink the fanboy community or otherwise throw them off the scent of the real, still-under-wraps Batman vs. Superman script, and (b) was written by none other than Kevin Smith. 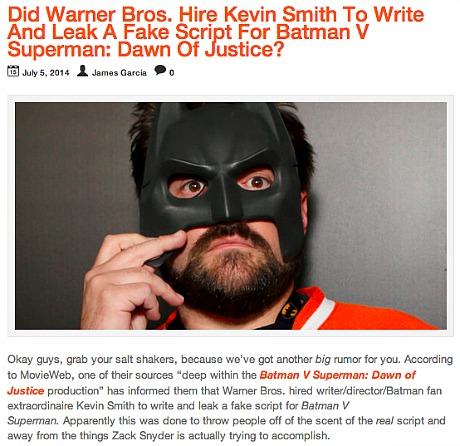 There are two…actually three things wrong with the alleged tipster’s story. One, the idea of a studio actually investing time and serious money to produce a red-herring “foiler” script is beyond ridiculous…a bunch of high-ranking, studio-connected nerds in black lace-ups who’ve crawled so deeply into the ass of their own mythology that they’re actually playing tradecraft fake-out games with lower-ranking nerds who then pass along the bullshit to even lower-ranking nerds?…WHAT? Two, I can’t imagine that Smith would accept a fee to write a fake anything (remember the humiliation that George C. Scott‘s General Patton felt when Allied command was using him to try and trick Germany into thinking that D-Day invasion would happen at Calais?) as this violates the Sacred Artist’s Code — i.e., lie to no one. And Three (and most tellingly), the fact that the Movieweb.com tipster refers to Warner Bros. marketing honcho Sue Kroll as “Susanne Knoll” obviously casts doubt upon the whole story.