Breaking: The parting of the Red Sea sequence in Ridley Scott‘s Exodus: Gods and Kings will out-do Cecil B. DeMille‘s backwards water-tank version in The Ten Commandments (1956). Walk like an Egyptian, of course, but first and foremost wear eyeliner like an Egyptian. I really, really like the eyeliner commitment in this thing. Joel Edgerton‘s Ramses looks somewhat weird but that’s the point, I think. I was worried a few months ago that Christian Bale‘s hair might look like a CAA agent’s but that problem has apparently gone away. This is only a teaser allowing for vague impressions. That’s enough for now.

“I have to admit the whole T-shirt thing wasn’t handled as well as it should have been. We didn’t know how the shirts would sell, so when they did we didn’t have enough in stock to satisfy the demand, so we got into this ‘back order’ situation, which then quickly turned into an ‘out of stock’ situation and people just got fed up. But now we’re back, with plenty of shirts in stock and a few new ones to add to the collection. And this is not a threat or a promise, it’s just a fact: all of the T-shirts we offer now will, at some point in the future, become unavailable. Because there’s no rule that everything has to be available all the time, forever. There really isn’t.” — from Steven Soderbergh‘s Extension 765 “threads” page. I’ve ordered a large. 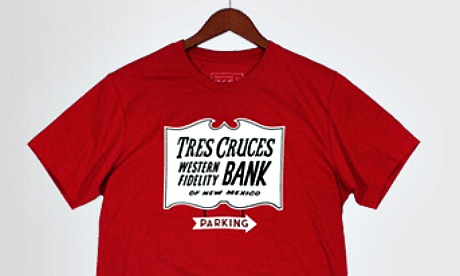 Christoph Waltz as a colorful eccentric is one thing. Perhaps it’s the only thing. But if you ask me he’s more interesting when he’s a bit icy and toned down, as he was in Roman Polanski‘s Carnage. Waltz is apparently back to eccentric in Terry Gilliam‘s The Zero Theorem. I don’t know, man. I’m not too sure about his performance or presence in Tim Burton‘s Big Eyes either. I don’t know anything any more.

A few hours ago I attended a graveside gathering for Jeffrey Ressner, a good friend and a first-rate journalist for Time, Politico, Rolling Stone, The Hollywood Reporter and Cashbox. Ressner died of a heart attack on 6.28. The memorial happened near the crest of a big green slope at the Burbank branch of Forest Lawn Cemetery. The eulogy line that everyone will remember came from producer pal Michael Lynn, who described Ressner as a “melancholy optimist.” Jeff’s interest was mainly in music (he began as a music industry reporter) but he also loved movies, and so I think he would have enjoyed the fact that his final resting place is fairly close to where Lee Marvin‘s “Walker” buried his wife, “Lynn Walker”, in John Boorman‘s Point Blank (’67). Ressner’s longtime partner Rina Echavez, his sister Lise Olsen, DGA Quarterly‘s James Greenberg, Deadline‘s Anita Busch, Amy Dawes, producer-writer Henry Schipper and several others attended.

In other words, if the Sharknado 2 producers had invested more money in the visual FX refinements it would somehow detract? The point of these stupid films, in other words, is to be ludicrously self-regarding. But this is Snakes On A Plane territory, and the lesson of that dud is that you can’t ever wink at the audience about anything. You have to play it as straight and earnest as Shakespeare. I’ll probably watch Sharknado 2, but the trailer tells me it won’t be much fun. I’ve no interest in laughing with the actors and the filmmakers and, you know, being nudged in the ribs. I want to laugh at them as they try to make something decent even though they’re doomed, of course, to fail. Because they’re untalented whores.

“With the exception of Kristen Stewart‘s alert, quietly arresting performance as a personal assistant to Juliette Binoche‘s famous, middle-aged actress undergoing an emotional-psychological downshift, Olivier Assayas‘s Clouds of Sils Maria (IFC Films, 12.1) is a talky, rather flat experience. It isn’t Persona or Three Women or All About Eve, although it seems to occasionally flirt with the material that these three films explored and dug into. MCN’s David Poland has written that it sometimes feels like “a female version of My Dinner With Andre” — generous! But on that note I’ll give Poland credit for thinking about this rather airless and meandering chit-chat film more than I did. It just didn’t light my torch. I agree with Poland on one point — it would have been a more interesting film if Assayas has focused more on Stewart and costar Chloe Moretz, who’s more or less playing a version of herself.” — posted on 5.23.14 from the Cannes Film Festival.

I under-described Richard Linklater‘s Boyhood (IFC Films, 7.11) in my initial Sundance review. Calling it “a mild-mannered thing, and yet obviously a mature, perceptive, highly intelligent enterprise” didn’t quite get it. No film in the history of motion pictures has ever delivered Boyhood‘s scope, concept or ingredients — the lives of a young Texas kid (Ellar Coltrane) and his sister (Lorelei Linklater) and their divorced parents (Ethan Hawke, Patricia Arquette) filmed over 11 or 12 years. So it’s really quite special and, yes, historic in that it captures stage-by-stage growth and aging and the usual surges and setbacks, but it’s also quite well done in each and every way. It’s never less than expert; never less than intriguing or astute or resonant. And yet it’s fair, as I stated last January, to call it “a remarkably novel, human-scale, life-passage stunt film.”

Boyhood grows on you like anything or anyone else that you might gradually get to know over a long stretch, and yet the 160 minutes fly right by. The long-haul scheme naturally gets in the way of what most of us would call a riveting drama. A film of this type is not going to knock you down with some third-act punch. It drip-drip-drips its way into your movie-watching system.