In a N.Y. Times op-ed piece titled “The Sony Hack and the Yellow Press,” screenwriter Aaron Sorkin has bitchslapped the editors and journalists who’ve published the Sony material stolen by the “Guardians of Peace” hackers in Thailand. These editors and journalists are slime, Sorkin is saying. That includes me, right? I’m a personification of slithery green ooze for joining in and riffing on the ramifications and so on? And what about my offering a clarification and defense of Amy Pascal? I thought that was okay.

“If you close your eyes you can imagine the hackers sitting in a room, combing through the documents to find the ones that will draw the most blood,” Sorkin writes. “And in a room next door are American journalists doing the same thing. As demented and criminal as it is, at least the hackers are doing it for a cause. The press is doing it for a nickel.”

The most interesting paragraph, for me, is the one in which Sorkin gives a new title to the much-described, much-gossiped-about Jobs project, for which he wrote the screenplay. That project is called Steve Jobs, Sorkin says. Seriously? Steve Jobs? What, like Michael Clayton and Dolores Claiborne? Sounds sucky, man. A whole different ring. Dump it and go back to Jobs. Or call it something else.

The N.Y. Times is reporting that Sony attorneys, including litigator David Boies, have demanded that news agencies ignore any ill-gotten information that has come from hacked Sony emails and data. Pay no attention to those situations and scenarios behind the curtain because the information is “stolen,” which of course it has been. News orgs can stay with the story but no more tasty email excerpts can be posted or published. In the three-page letter Boies said that the studio “does not consent to your possession, review, copying, dissemination, publication, uploading, downloading or making any use” of the information. You guys are reputable, front-line journalists, Boies is saying, and so you must disregard what all the other websites who are covering this story will almost certainly not disregard. You must abstain. You must not promote or assist the hostile desires of the Bangkok-based, most likely North Korean-backed hackers.

While there’s some contentment about Paul Thomas Anderson‘s Inherent Vice having earned $330,000 this weekend in five New York and Los Angeles theaters, there’s also concern that it might not match the earnings of previous PTA films (The Master, There Will Be Blood, Punch-Drunk Love, Magnolia, Boogie Nights) by the end of the road. I was half-and-half on The Master, seriously impressed by Blood, generally pleased with Love and Magnolia and delighted with Boogie Nights. But I’ve had difficulty with Inherent Vice both times I’ve seen it. My first reaction after the New York Film Festival showing was that I might not be smart or patient enough to get it, and that maybe the curtains would part upon my second viewing. Well, that didn’t happen. There’s always round three but I don’t know that I’m up for it. I really don’t want to hang with Joaquin Phoenix‘s Doc Sportello again, man. I hated his company like nothing else. Vice is far from thoughtless or haphazard and certainly deserves respect for PTA’s meticulous composition and use of…was it one or two Neil Young tunes? But I didn’t give a damn who did what (and neither did Thomas Pynchon — I get that) and I didn’t care about anyone in the entire cast except Martin Short. Pynchon fans might argue that Inherent Vice is an entirely different bird than Robert Altman‘s The Long Goodbye and Joel and Ethan Coen‘s The Big Lebowski, but these films are still quasi-detective stories about low-rent loser types trying to make sense of a complex Los Angeles demimonde and scratching their heads and shrugging their shoulders at the perverse and ungainly sprawl of it all. I recognize that Vice is more liked than disliked by critics and that the HE comment symphony may take a few pokes at me, but I’m used to that. What’s the verdict?

A friend who attended an Annie screening last Thursday afternoon confides that a more-or-less easygoing, well-positioned film journalist left at the halfway point, muttering that “life is too short.” The tagline for David Rooney‘s Hollywood Reporter review assures that “the sun’ll come out tomorrow, by which time this toxic mess should be forgotten.” Variety‘s Ronnie Scheib has written that “while there are several possible good reasons to remake the Depression-set musical Annie in 2014, none of them seem to have informed [director] Will Gluck’s overblown yet undernourished treatment.” In a review titled “Barf, Says Sandy,” Stephen J. Whitty writes that after the film ended he overheard a little girl complain to her mother that there “wasn’t enough of the dog in the movie.” Whitty’s comment: “Oh, I don’t know. I saw a dog, all right.” I tried like hell to make Thursday’s 5 pm screening (held a bit earlier to accommodate the family crowd) but I couldn’t get there in time. Now I might have to pay to see it. I do feel it’s important to do that, reactions notwithstanding.

I’ve been relishing David Denby‘s film reviews for over 35 years, or since the late ’70s when he began reviewing for New York magazine. He began co-reviewing with Anthony Lane at The New Yorker in late ’98, and now, 14 years later, he’s been de-berthed of that responsibility. Lane will henceforth carry the whole load. Denby will stay on, banging out whatever New Yorker pieces come to mind and that’s fine, but why, I wonder, is he being…I don’t want to say “put out to semi-pasture” but he has been relieved of his big-dog status. Denby is only 71, which can be a kind of middle-aged period for some writers. There’s obviously a lot more in the tank. If I were Denby I’d launch my own site and review everything and anything. I’ll always love Denby’s writing — he always brings you into his realm. You feel as if you’ve watched the film with him and that he’s examined and re-examined things through to the bottom. He’s got to keep going and going — there’s no other option. Oh, and by the way? It’s allowable to note that Reese Witherspoon and original Wild author Cheryl Strayed are built differently, which they are.

To my eyes, the quality of streaming high-def films (Vudu, Amazon, Warner Classics) is fully at par with Blurays. Recently a TCM Bluray of Howard Hawks‘ Only Angels Have Wings went on sale, but I can’t imagine it looking richer and more detailed than a streaming HDX copy that I bought on Vudu. What’s the point? But I can’t surrender my love of physical media. Last night I bought the Criterion Bluray of My Darling Clementine (an impulse I’m almost sorry I succumbed to, given my vague dislike of John Ford‘s Monument Valley films) and I had to buy the Bluray of Thom Andersen‘s Los Angeles Plays Itself — been waiting to own this puppy for ten years now. And I’ve always had a thing for Uli Edel and Berndt Eichinger‘s The Baader-Meinhof Complex. Will I be buying Blurays five years hence? Good question. I know that I don’t like the idea of not replenishing the library. Which probably means I’ll keep shelling out as they long as they crank ’em out. 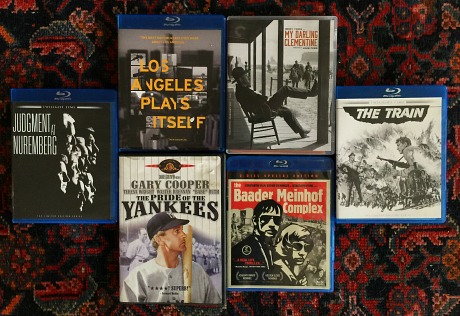 The Time Warner and supermarket self-scanning checkout jokes are inspired. No exaggeration — this may be one of the best Saturday Night Live cold opens of the 21st Century. Seriously.

Last night Bill Cosby attempted to play the racial solidarity card by appealing to African-American journalists to adopt a “neutral” mindset in reporting about allegations that he drugged and sexually assaulted over 25 women in his salad days. Speaking to N.Y. Post reporter Stacy Brown, who often writes for African-American media, Cosby said, “I only expect the black media to uphold the standards of excellence in journalism and when you do that you have to go in with a neutral mind.” Translation: “You guys need to watch my back because blood’s thicker than the mud…right? If I can’t get a break from black journalists, who can I get a break from?” This recalls Samuel Johnson’s famous line that “wrapping one’s self in the cloak of racial solidarity is the last refuge of a besieged African-American scoundrel.” Wait…did I get that right?