18 Comments
Get Your Spartacus Ya-Ya’s Out

Since last summer Universal Home Video has been working with restoration guru Robert Harris on a digital high-def restoration of Stanley Kubrick’s Spartacus (’60). This new version will, I’m told, look more detailed and more Super Technirama 70-ish than the somewhat derided “shiny” Spartacus Bluray that came out in 2010. The new version, which is both a restoration and a reconstruction, was going to be screened this weekend at the TCM Classic Film Festival but Universal yanked it at the last minute because it couldn’t be finished in time. It’s now expected to pop on Bluray sometime next fall. 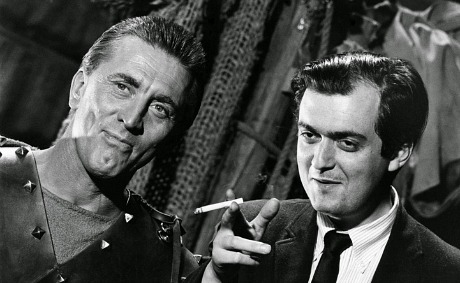 Soon after the 2010 Bluray emerged Harris, who famously supervised the Spartacus restoration of 1991, called for a new digital harvest that would more closely represent the film as it appeared in its early 70mm Technirama engagements.”

“The bottom line is that the new Spartacus is going to be gorgeous,” Harris told me earlier today. “The work has been underway since last July, and it’s been a huge, huge project. I’ve been consulting with them, and Universal is taking this very seriously.  They’re doing everything that I asked for, and in 4K. You’re going to see detail and color that you haven’t seen since the restored 70mm version screened 24 years ago.”

I’ve participated in at least a couple of hundred round-table junket interviews over the last 30-odd years, and more often that not some idiot will ask either (a) a moderately stupid question or (b) an excruciatingly stupid one, and I mean the kind that makes your brain suffer a kind of seizure. But over the last six to eight years this tendency has gotten worse. Many TV journos, I’ve heard more than once, have developed an idea that moronic, invasive, non-professional questions are what the audience relates to. Nervy irreverence and put-on interviews in a silly vein have pretty much become the brand of MTV.com’s Josh Horowitz, and his success has probably inspired others to follow. So The Project‘s Jonathan Hyla asking Cate Blanchett about a cat on a leash is pretty much within the norm these days. (Notice that Hyla is reading the question, meaning that his editor has told him to ask it or Hyla had given the question a little bit of thought before putting it to paper.) Cheers to Blanchett for refusing to play along, of course — “That’s your question?…that’s your fucking question?”

On 1.26.15 I wrote that Rick Famuyiwa‘s Dope (Open Road, 6.30) will “almost certainly be a hit — a just reward for being a snappy (i.e., jizz-whizzy), cartoonish, wild-ass Inglewood ‘hood action farce about friendship, guns, ’90s sounds, romance, sellin’ somebody else’s cocaine, gangstas, hot girls,” etc. And yet for all its keep-it-comin’ energy Dope is “a fleet, Tarantino-like hodgepodge of fantasy bullshit in the vein of a New Line Cinema release from the ’90s (i.e., House Party), and adapted to the general sensibility of 2015. It’s fun as far as it goes but definitely not that great. Everything that happens fits a carefully calculated Hollywood street sensibility and is dead bang on the nose; nothing is soft or subtle or indirect.” Reactions to the just-popped teaser?

Marseilles prosecutor Brice Robin told a news conference earlier today that Germanwings co-pilot Andreas Lubitz deliberately took flight 9525 on a suicide dive into the French Alps two days ago. Re-phrase it: a seemingly reliable, completely certified, “very nice” co-pilot with no apparent terrorist associations suddenly flipped the bonkers switch and became a psychotic mass murderer at the drop of a hat, killing 150 passengers. My first reaction, to be honest, was “at least it wasn’t a mechanical error, systemic or otherwise, so the odds of my next commuter flight ending in a crash are no higher than before the Germanwings tragedy.” But my second reaction was “wait…isn’t this the third time within the last 13 months that planes have gone down due to an apparently psychotic, suicide-minded pilot or pilots?” The Germanwings tragedy, AirAsia flight QZ8501 last December and Malaysia Airlines Flight 370, a Kuala Lumpur-to-Beijing flight which totally vanished on 3.8.14 with 239 people aboard. I hate to say it but this is a movie — the discovery of an inexplicable death virus that turns airline pilots into suicidal loons.

“Severance,” the first episode of the final Mad Men season, feels like a return to square one — business as usual at Sterling Cooper & Partners, sex, a death from cancer, sexism, finessing clients, Don Draper drinking and catting around, a firing, office disputes, back to the darkness and so on. Mad Men has been running nearly eight years and we’re only weeks from the finale, and I didn’t get even a slight feeling of forces gathering and final fates approaching.   It almost felt as if the series was starting all over again fresh…almost. The most striking performance came from Elizabeth Reaser as a melancholy coffee-ship waitress whom Draper has a curious attraction for (and vice versa to some extent). The event at the Dorothy Chandler Pavilion was fun, spirited, relaxing, cool. The band at the after-party played mild, old-fashioned MOR — it felt like the pre-fire party scene in Irwin Allen‘s The Towering Inferno. I decided not to raise the sideburns issue…to hell with it. 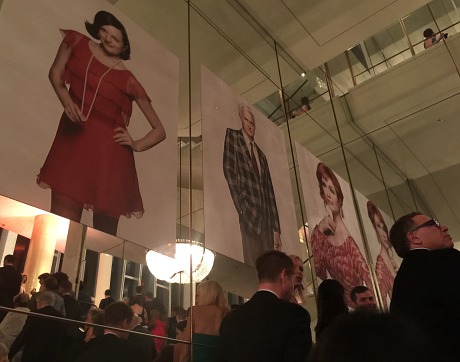 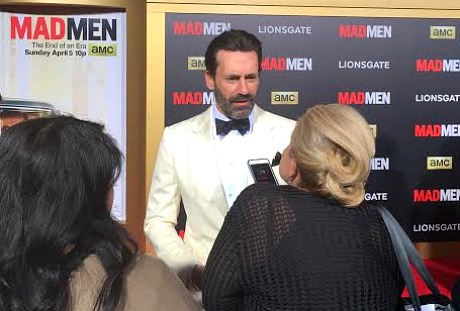 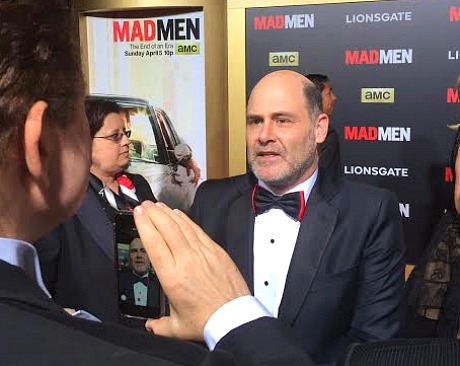