Okay, putting the mask on was just a thing to do. Ryan O’Neal wanted to pose in an odd way. Whatever. But why was an oxygen tank on the set to begin with? Oxygen for what? For people who’ve suffered an anxiety attack and need to calm down or something? Stanley Kubrick was obviously less than alarmed. Have you ever flipped through a photo book called “Wisconsin Death Trip“? 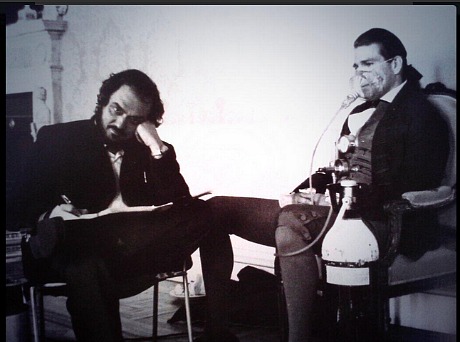 “With the exception of Kristen Stewart‘s alert, quietly arresting performance as a personal assistant to Juliette Binoche‘s famous, middle-aged actress undergoing a psychological downshift, Olivier Assayas‘s Clouds of Sils Maria is a talky, rather flat experience. It isn’t Persona or Three Women or All About Eve, although it seems to be occasionally flirt with the material that these three films dug into. MCN’s David Poland has written that it sometimes feels like ‘a female version of My Dinner With Andre‘ — generous! But on that note I’ll give Poland credit for thinking about this rather airless and meandering chit-chat film more than I did. It just didn’t light my torch. I agree with Poland on one point — it would have been a more interesting film if Assayas has focused more on Stewart and costar Chloe Moretz, who’s playing a version of herself.” — from a 5.23.14 mini-review, filed from the Cannes Film Festival.

We all realize that movie trailers always use the lowest-common-denominator elements and we all know that comedies pitched at women tend to be…unsubtle? But this latest trailer for Hot Pursuit, obviously a female Midnight Run with a much lower IQ, seems almost painfully primitive. How can people sit through films like this? How can you get through life with the kind of mind that would seriously enjoy this kind of thing? The director is Anne Fletcher, the former choreographer who directed The Proposal.

I’m a little late to the table on the death of big-time marketing hotshot Marvin Antonowsky, who left three days ago (4.7) at age 86. He was a good friend within a certain bandwidth and a reliable source of information to me between the early ’90s and early aughts. Marvin used to read box-office figures to me on Sunday mornings (remember those days?) and sometimes share tracking information on upcoming films. I used to love hearing him bark that this or that film “isn’t tracking!” He once had David Poland and I over to his home in Manhattan Beach to give us an early peek at a major film, although I can’t remember what it was. (I’ll never forget how Poland once threatened to “out” Antonowsky as the source of my tracking info — a real sweetheart move.) Marvin and I were also occasional screening pallies in the late ’90s and early aughts.

Antonowsky was closely allied with Frank Price during most of his Hollywood career. I first got to know him sometime around ’82, or during a period when he served as an upper-echelon marketing exec at Columbia from the early to mid ’80s. In ’84 he went over to Universal as marketing president, toughing it out with studio chief Price until the Howard the Duck fiasco of ’86. Antonowsky then shifted over to TriStar as a marketing consultant in the late ’80s, and then went back to Columbia in ’90. His last major gig was as marketing president with Price Entertainment.

With United Talent Agency‘s recent snatching of several CAA agents and clients over the past week, my thoughts turned this morning to UTA’s CEO and co-founder Jeremy Zimmer, with whom I’ve felt a vague connection for 25 years and actually a bit more. Not so much for who he is (he’s fine but he’s an agent) but because in the mid-to-late ’70s I was somewhat friendly with his mother, author Jill Robinson (“Perdido“, “Bed/Time/Story”), when I was living in Westport, and because I’ve long been an admirer of her father (and Jeremy’s grandfather) Dore Schary — the late producer, playwright, screenwriter and former RKO and MGM honcho, a serious liberal whose taste in films was more complex and layered and socially progressive than that of Louis B. Mayer, whom Schary succeeded at MGM before losing the post himself in 1956.

I’ve always loved the sound of that name — Dore Schary. It could be a character in a mystery novel, used to suggest someone cultivated and refined. There’s no way in hell that a lifeguard or a race-car driver or a high-school janitor could ever answer to it.

And I’ve always respected Zimmer for having uttered, a quarter-century ago when he was at ICM, an uncharacteristically blunt (and, as it turned out, prophetic) assessment of the basic nature of Hollywood’s agent culture: “The big agencies are all like animals, raping and pillaging each other day in and day out.” (My admiration grew years later when Zimmer’s thought was echoed by Matt Zoller Seitz when he said in a 2006 Slate piece that Barry Lyndon was about “animals in clothes.”) Zimmer’s quote, which resulted in ICM chairman Jeff Berg showing him the door, was first reported by Variety and then by Spy‘s “Celia Brady”.

This Sawyer-Jenner tease reel is pathetic. The point is to tabloid tantalize. What will his voice sound like? What about his mannerisms? What kind of makeup will he be using or will he cut us a break? On his own day-to-day, look-in-the-bathroom-mirror terms Jenner is probably fairly Bhagavad Gita and comme ci comme ca, but the audience for this show will be indistinguishable from the Londoners who paid to gaze upon Joseph (a.k.a. “John”) Merrick before he was adopted by Frederick Treves. I dream of Jeannie with the light brown hair.