An absurd story broke this morning on TMZ, about video footage of Ariana Grande and a boyfriend visiting a Lake Elsinore donut shop. An employee brought out a large tray of donuts and Grande said, “What the fuck is that? I hate Americans…I hate America.” TMZ has called the remark scandalous, “fat shaming on a national scale.” Some believe Grande may have hurt her career. Expressing disgust at obesity and the foods that cause it is, of course, sacrilege in these twisted times. Love America, love the obesity. The latest CDC figures say more than one-third of Americans are obese. And that “non-Hispanic blacks have the highest age-adjusted rates of obesity (47.8%) followed by Hispanics (42.5%), non-Hispanic whites (32.6%), and non-Hispanic Asians (10.8%).” So by all means, throw Grande to the lions and may other celebrities take heed. 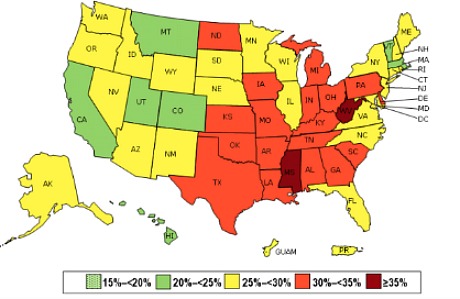 There’s a Los Angeles for Bernie Facebook page but no Bernie Sanders for President storefront in Los Angeles, apparently. I wanted to pick up a few buttons and bumper stickers but no one seems to have any. So I ordered a few online. I’ll be donating $100 but I’d like to attend a rally or something. I don’t how much good I’d accomplish handing out literature in Gardena or Alhambra or El Monte.

A friend complained today that sharing my honest thoughts about Hillary Clinton was feeding right into a concerted effort by conservatives to try and goad liberals into putting her down online. “I feel for her deep down,” I replied. “I mostly agree with what she wants to do as President. I don’t want her to lose, particularly to a Bush or a Rubio, God forbid. She’ll ultimately be the best alternative, I regret to say, given the strong likelihood that Bernie can’t go the distance. But I don’t like Hillary. I never have. She doesn’t turn me on. She sort of irritates me. And I can’t not say that, given my natural inclinations.”

“If you don’t have Thor’s hammer, Hulk’s bulk, Captain America’s resolve or Iron Man’s know-how, what’s an Avenger to do? The answer provided by Ant-Man is to go small, smaller than Black Widow’s fingernail, and exude a good sense of humor, which is precisely what floats this latest addition to the Marvel firmament,” writes Hollywood Reporter critic Todd McCarthy. “The timing might even be fortuitous as far as the fan base is concerned, what with the sense of overkill emanating from the most recent Avengers installment and a mirth quotient in the new outing that, by Marvel standards, ranks behind only that of the disarming Guardians of the Galaxy last summer.

“Although the story dynamics are fundamentally silly and the family stuff, with its parallel father-daughter melodrama, is elemental button-pushing, a good cast led by a winning Paul Rudd puts the nonsense over in reasonably disarming fashion.

“The geek world, even if it approves what has finally emerged onscreen, will still always wonder what Ant-Man would have been like if, as originally intended, Edgar Wright, he of Shaun of the Dead and Scott Pilgrim vs. the World cultish veneration, had directed the screenplay he wrote with Joe Cornish. Would it have been more extreme, irreverent, idiosyncratic and, in the end, less Marvel-like?

True-life tale of a 1952 rescue mission off the Cape Cod coast after two oil tankers, SS Fort Mercer and SS Pendleton, were destroyed by a collision in the midst of heavy waves. Have heaving CG seas improved since the days of The Puhrfict Stauhm? You tell me. Directed by Craig Gillespie (Lars and the Real Girl). Clearly all the actors — Chris Pine, Casey Affleck, Ben Foster, Holliday Grainger, John Ortiz, Eric Bana — attended the same New England accent school.

I was a bit surprised to read that Baltasar Kormakur‘s Everest (Universal, 9.18) will open the 72nd Venice Film Festival on Wednesday, 9.2. Out of competition, of course. I’m sure it’ll be pretty good for what it is (a tragic, fact-based disaster film), but Kormakur’s Contraband and 2 Guns made it clear that he’s more or less Renny Harlin of the early ’90s. Pretty much all the male leads die in this, right? Jake Gyllenhaal, Jason Clarke, Josh Brolin, Sam Worthington, John Hawkes and Michael Kelly. With Keira Knightley, Emily Watson and Robin Wright fretting as sketchy reports come in. Everest will almost certainly not be a Telluride film…right? 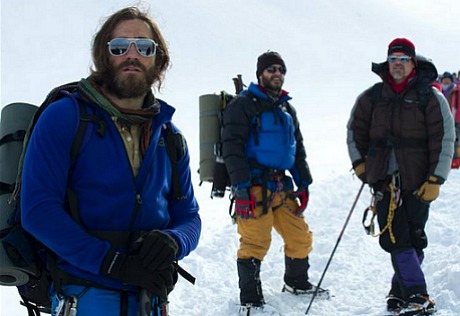 The new British-made trailer for Steven Spielberg‘s Bridge of Spies (Disney, 10.16) is a significant improvement over last month’s teaser. It still has that trademark bluish-white Janusz Kamsinski cinematography, which I loathe with a passion, but it lays out the social and political context of the late Eisenhower era and delivers a more precise portrait of U.S. vs. Soviet tensions when the Francis Gary Powers U2 incident happened in May 1960. Spielberg and Hanks were kids when this shitstorm happened, and so there’s likely to be an extra measure of authority in the depictions of those times. Hanks’ 17th version of his man-of-character-and-infinite-patience thing, etc.

Rob Garver, director of the forever-gestating What She Said: The Art of Pauline Kael, needs $75K to finish the film, which I had expected (emphasis on the “had”) would be hitting the fall festivals. I guess not. Okay, I’ll contribute $100 but it profoundly bothers me when a trailer has a slightly wider than correct aspect ratio. I’m not talking about the Kickstarter pitch as much as the Vimeo trailer posted after the jump. I hate the horizontal taffy-pull look. Fix it, please.

“If we go back and think over the movies we’ve enjoyed—even the ones we knew were terrible movies while we enjoyed them—what we enjoyed in them, the little part that was good, had, in some rudimentary way, some freshness, some hint of style, some trace of beauty, some audacity, some craziness….They have the joy of playfulness. In a mediocre or rotten movie, the good things may give the impression that they come out of nowhere; the better the movie, the more they seem to belong to the world of the movie. Without this kind of playfulness and the pleasure we take from it, art isn’t art at all, it’s something punishing, as it so often is in school where even artists’ little jokes become leaden from explanation.” — from a Pauline Kael piece called “Trash, Art and the Movies,” from “Going Steady.”

I’m off to see Trainwreck again tomorrow night, and I can’t wait. I know when a movie has its shit together and when it doesn’t, and apart from third-act disputes and discussions (which are fair to kick around) Trainwreck is two or three cuts above. It does the conventional relationship thing in a dryer, sharper, deep-down way. For the deadpan hilarity alone you can’t not see it. Smarts, depth, poignant perceptions, gut-level honesty — qualities obviously owned by Amy Schumer but not, I regret to observe, abundant among Kate Upton types. Prevalent now and then but not abundant. I wish it were otherwise.

“Perhaps most surprising, though, is what a strong performer Schumer proves to be,” says Screen Daily‘s Tim Grierson. “On her Comedy Central show, she’s quite funny in short sketches, but here she gets the chance to play a multi-dimensional character. The actress-comedian makes Amy’s childishness endearing while also recognising its shortcomings.