A screenwriter friend has flipped for Adam McKay‘s The Big Short (Paramount, 12.11), which screened tonight at the DGA for friends of the filmmakers, various industry types and select press. Based on Michael Lewis‘s 2010 book “The Big Short: Inside The Doomsday Machine,” it’s about guys who figured out what the big predators were doing — the wolves who created the conditions that led to the housing and credit bubble meltdown of ’08 — and profited by it. “It’s a 9 or a 9.5…a very strong film, full of energy, breaks the fourth wall…totally adrenalized and extraordinarily entertaining” the screenwriter says. “It’s going to upset the apple cart. It’s definitely Best Picture material, and Steve Carell, for sure, is the stand-out…the Oscar nominee. They’re all supporting but Carell’s is the most satisfying performance — he’s jaw-droppingly good. Ryan Gosling is Gordon Gekko, Christian Bale is a kind of financial idiot savant, and Brad Pitt has a fairly small role. I was a big fan. It’s not a comedy but it has a sense of humor…it’s as comedic as House of Cards, put it that way.” The after-party was held (where else?) at the Chateau Marmont.

Singer, dancer, choreographer and director Alan Weeks, who made his big-screen mark as Willie the drug dealer in a memorable first-act scene in The French Connection and particularly for being racially harassed by Gene Hackman‘s Popeye Doyle for “picking your feet in Poughkeepsie,” has died at age 67. Weeks ironically taught theater in Poughkeepsie in the latter stages of his career; he also directed productions for the Capital Repertory Theater in Albany. Weeks had spent the last 30 years as a performer and educator in the Albany region, according to a Times Union obit. Weeks had lived in Rensselaer County since 1985. He had a featured role in Barbara Streisand‘s original 1964 Broadway production of Funny Girl at the Winter Garden. Weeks later performed in The Wiz and Ain’t Misbehavin’. He also directed and choreographed 1992’s The High Rollers Social and Pleasure Club.

Joan Leslie, James Cagney’s romantic costar in Yankee Doodle Dandy, passed three days ago in Los Angeles. She was 90. Condolences to family, friends, fans. Leslie was a plucky, likable second-lead type who could cry on cue. Her career peaked for two years due to (a) a small role in Raoul Walsh‘s High Sierra, and (b) two lead roles that followed — Gracie Williams, the fiance of Gary Cooper‘s Alvin York, in Howard Hawks‘ Sergeant York (’41) and Mary Cohan, the singing girlfriend and then wife of Cagney’s George M. Cohan in that nominee for the 1942 Best Picture Oscar, which was directed by Michael Curtiz. Honestly? I only remember Leslie from Yankee Doodle Dandy. I remember that Cooper’s mother was played by Margaret Wycherly (a.k.a., Ma Jarrett in White Heat) but I don’t remember Leslie, and I swear to God the only actress I remember from High Sierra is Ida Lupino.

36 and 1/2 years ago Saturday Night Live fans saw a musical skit called “Bend Over, Chuck Berry.” Season 4, episode 17 — 4.14.79. I don’t recall that this skit was included in the SNL 40th Anniversary Special that aired last February. It’s understandable if it wasn’t used because it’s obviously politically incorrect by today’s standards. It made fun of gays and gay culture as well as The Village People, who were riding high back then. But it was really about the horror that was late ’70s disco music. It was about the love that SNL writers felt for real rock ‘n’ roll and how much they despised the shit they had to listen to when they visited Studio 54. “Bend over, Chuck Berry / Put your guitar away / ‘Cause they’re playin’ disco music / From New York to L.A. / Take a look around you / There’s no more rock and roll today / So bend over, Chuck Berry / Disco is here to stay.” Don’t kid yourself — gay urban men were virtually required to worship disco back then, and in my eyes that made them the aesthetic enemy. In ’78 or thereabouts I owned a T-shirt that said “Death to Disco.” 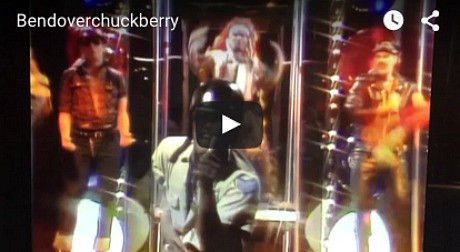 I’m not surprised in retrospect when Charlie Kaufman‘s Anomalisa won the Grand Jury Prize at the 72nd Venice International Film Festival. Esoteric originality will always find support and affection at that festival. Nor was I entirely surprised when Paramount Vantage acquired it for distribution. (The initial plan is open it theatrically on 12.30.) This despite my having felt, at best, a certain arms-length admiration when I saw it in Telluride about five weeks ago.

I called Anomalisa “another humanistic downhead visit to Charlie Kaufmanland — an amusing, occasionally touching stop-motion piece about a pudgebod asshole visiting a No Exit hotel in Cincinatti and slowly dispensing his depression-fueled mustard-gas vibes to one and all.”

The pudgebod — an author of books on customer service named Michael Stone –is voiced by David Thewlis. His brief romantic encounter with Jennifer Jason Leigh‘s Lisa, a fan, leads him to a moment of self-reflection and in fact confession.

Mine is a minority view. There are many others who were deeply touched if not amazed by Kaufman’s film; some are even saying it deserves a Best Picture nomination. That’s definitely not happening, but it could snag, appropriately, a nomination for Best Animated Feature.

“Leaving aside the simplistic focus on who won or lost, Bernie Sanders clearly appealed to many people Tuesday night, and his secret weapon helps explain why. The gift of plain speech. Not so much the content of Sanders’s remarks, though that matters, than the way he delivers them. He uses the kind of language ordinary people use themselves and speaks with a passion that makes it clear he genuinely believes what he’s saying. Sanders was the only person on that stage Tuesday night who talked like a real person, not a calculating politician or policy wonk.

“In a word, Sanders comes across as authentic. And authenticity goes a long way with Americans. We are a people for whom ideology matters a lot less than speaking plainly and sticking by your beliefs. — From a 9.14 Nation article by Mark Hertsgaard, titled “Bernie Sanders Has a Secret Weapon, and the Media Elites Just Don’t Get It.”

The Westwood all-media screening of John McTiernan and Joel Silver‘s Die Hard happened in early July of ’88, and I was there with bells on. It was thrilling and amusing, shamelessly manipulative, beautifully choreographed, bigger than life, a knockout. The crowd loved it. A week after it opened I went back to see it with then-wife Maggie and Jett, who was then about six weeks old. (Unlike the vast majority of parents who take their infant children to movies, I took Jett out to the lobby when he started crying.) Die Hard was a major-league gift — a well-engineered, big-concept actioner of the first order. If you didn’t love it there was something wrong with you.

But no act of pleasure goes unpunished, and for the sin of enjoying Die Hard 27 and 1/2 years ago, audiences have been subjected to sequel after diminishing sequel, four of them, each depressing or deflating in its own way and starring the ruggedly sassy Bruce Willis. There have also been six Die Hard video games. And now comes the latest corruption — a new franchise about the young John McClane called Die Hard: Year One. This, of course, is a standard changeover tactic — retiring the original actor and passing an iconic role to some younger fellow, which of course originated with the James Bond franchise.

Most of the reaction to Die Hard: Year One has been negative, of course — this is pathetic, let the franchise die, is there no limit to the greed?