The latest Gurus of Gold chart (dated 11.5) reflects the current reality as most of us are gauging it — Spotlight on top, The Martian second and Room in third place. Then it starts to get weird. Everyone knows Bridge of Spies is a decently made period drama that nobody is doing handstands over, not really, and yet it’s sitting in fourth place ahead of The Revenant and Joy? It’s best to wait for the final cut of David O. Russell‘s film but everyone knows for a fact (based on the most recent Revenant trailer) that Emmanuel Lubezki‘s visual delivery will blow everyone’s socks off so why play games? The worthy and well-liked Brooklyn is in seventh-place but — here’s the shocker — Steve Jobs, which has underperformed commercially and seen its stock decrease critically, is ahead of the ninth-place Carol? The latter understands the flotation of love — it’s a transporting, touchingly well-written capturing of a passionate affair in a fully immersive early ’50s milieu. People were over the moon about Carol in Cannes, and yet it can’t out-poll a movie that is understood by everyone to be something of a failure? During a Musso & Franks luncheon yesterday an older Academy guy asked me “why do you think Steve Jobs hasn’t broken through?” and I said “because it’s confining and repetitive, and because Michael Fassbender is too good at playing a dick?”

What’s the hoo-hah about Liam Neeson playing the principled FBI snitch who passed along good stuff to Washington Post reporter Bob Woodward in that parking garage? If anyone has the script please pass along because right now Peter Landesman‘s Felt, which will begin shooting next March, doesn’t sound like much. So we get to see Deep Throat‘s side of the story…big deal. What can this thing be if Landesman, who wrote the script, sticks to the facts? Sounds to me like an HBO movie, at best.

You and I know that the average idiot is going to want to see Neeson snarl and beat guys up and drive a Pontiac GTO at high speeds through downtown Washington, and that’s not in the cards this time.

Okay, so Mark Felt began to feel appalled at what he was learning about the mentality of the Nixon White House and the adventures of the Plumbers and how the FBI was missing or sidestepping too much of what was really going on, and so he decided to pass stuff along to Woodward, and then two or three years before he passed Felt confessed all in a book. And…? The better story was told 39 years by Alan Pakula, William Goldman, Robert Redford, Dustin Hoffman, Jason Robards and Gordon Willis.

Deadline‘s Mike Fleming has described Felt as a “taut spy thriller” that “chronicles the personal and professional life of the brilliant and uncompromising Felt” — my eyelids are starting to droop — “who risked and ultimately sacrificed everything — his family, his career, his freedom — in the name of justice.” That sounds to me like a load of hyperbole that some flunky or publicist tapped out during lunch hour.

I know I’m always the guy who says “hey, this actor is packing it on.” Like I did when Henry Cavill had an Ernest Borgnine thing going on at 2014 ComicCon or when Johnny Depp turned up in Toronto looking like Edward Binns in 12 Angry Men. Obviously this shit can get old, and so my instinct was to ignore the Brando-ish ballooning that has recently befallen poor Ben Affleck. I noticed it right away when he courteously said “hi” to Sasha Stone and myself when we dropped by the Savannah set of Live By Night. “Let it go and don’t be tedious,” I told myself. I mentioned it to Sasha and she said, “It’s probably because of that 1930s suit he was wearing…it makes him look a little heavier.” But then three days ago the Daily Mail ran some photos of Affleck in a T-shirt and sweats, and I’m sorry but it has to be faced. Forget the guy he physically was in Chasing Amy or in that Jack Ryan film with Morgan Freeman. Affleck right now is not even the guy he was in Gone Girl and or, to go by set photos, when he was filming Batman v. Superman: Dawn of Justice. I never thought I’d say this, but with Kevin Smith having dropped 85 pounds Affleck is…forget it. I’m done with this. Affleck, who is directing Live By Night, will simply have to shoot with a lot of shadows and wear clothes are a couple sizes too large. 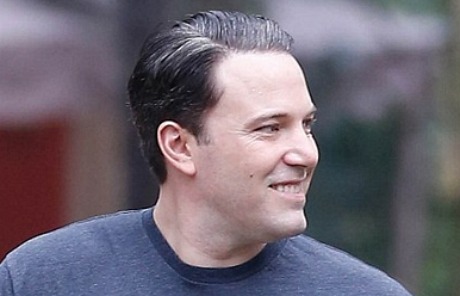 Can you imagine how hot it would be if a digitally reanimated Marlene Dietrich and Gene Tierney could somehow be cloned into playing Cate Blanchett and Rooney Mara‘s roles, respectively, in Todd Haynes‘ Carol? No complaints about Blanchett-Mara whatsoever, but I felt a slight hormonal surge when I saw this side-by-side of Dietrich and Tierney on Twitter the other day. What other old-Hollywood actresses could have played these roles if they were somehow time=travelled into the present? Katharine Hepburn as Carol and Rita Hayworth as Therese Belivet? Dietrich and Elizabeth Taylor as she was in the early to mid ’50s? Mid-50s Susan Hayward as Carol and Shirley MacLaine as Therese? 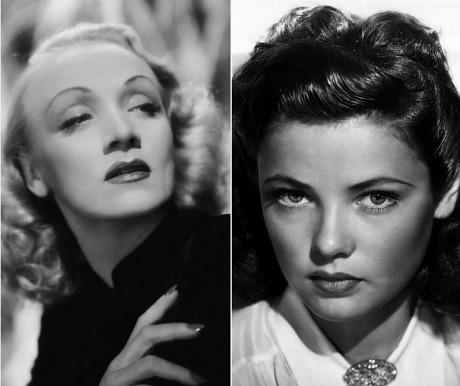 Every now and then I’ll ask a critic or entertainment journalist about a film they’ve just seen that I haven’t gotten around to, and sometimes I’ll ask “what aspect ratio was it in? Academy 1.85 or 2.39 Scope?” And with the exception of hardcore guys like Todd McCarthy, Kent Jones, Scott Foundas or Justin Chang 85% of the time the answer will be “uhhm, I didn’t notice.” And these are professionals — people who really should know their aspect ratios and should, you know, have a little respect for what the d.p. intended. One presumes that the percentage of average ticket buyers who notice a given a.r. is even lower. It follows that even fewer Average Joes are going to notice that The Hateful Eight‘s Ultra Panavsion 70 a.r. of 2.76:1, as the difference between 2.39 and 2.76 is not exactly glaring if you’re just slumping in your seat with your legs spread-eagled with the large popcorn and the 32-ounce drink. Probably less than 5%. People don’t care much about image aesthetics as a rule. I honestly believe they don’t pay attention to this stuff any more than cows in a field will notice the difference between bright sunlight at midday and how it turns soft and golden just before dusk.

The headline quote is spoken at a crucial moment in True Romance by Boris (Eric Allan Kramer), a blonde, heavyset security guy who works for producer Lee Donowitz (Saul Rubinek), a bearded smoothie who was more or less modelled (except for the cocaine-buying part) on producer Joel Silver.

The line, of course, is from Quentin Tarantino, who wrote his True Romance screenplay when he was poor and scrambling and always fearful, he’s said in interviews, that L.A. cops would pull him over for unpaid parking or traffic tickets. In ’08 Tarantino apparently told Maxim writer Marc Spitz in a piece called “True Romance: 15 Years Later” that his screenplay, made into a highly flavorful film by Tony Scott in ’93, was his “most autobiographical to date.”

No, of course I’m not going there. Obviously “I hate fuckin’ cops” is a tough-guy line for a movie, blurted out just before a shoot-out, and not any kind of basic-attitude, real-world statement on QT’s part. On top of which Quentin wasn’t Boris — he was Clarence Worley (played by Christian Slater).

But let’s be honest — tapping into emotional undercurrents and sometimes unsettling memories are part of the writing process. And Tarantino, I’m sure, remembers his own. He said last night on Real Time With Bill Maher that since the cop boycott brouhaha he’s been been feeling a bit fearful of cops again, looking in his rearview mirror the way he used to back in the ’70s and ’80s.

Do I suspect that on some deep-down level Tarantino was channelling his long-put-aside cops paranoia when he made his speech in New York a couple of weekends ago? Maybe a little teeny-weeny bit.