Well, the second time is definitely the charm with The Revenant. You just have to get past the shock of the brutality contained in the survival ordeal that Leo goes through. Once you know what’s coming and you’ve digested that and thought it through, the second viewing (which happened tonight at the Hollywood Arclight) results in a serious uptick. I was entranced all through it. Not that I didn’t admire The Revenant the first time, but this time I fell heavily in love with every aspect, every shot, every beat, every performance and definitely the music again…Ryuichi Sakamoto! The Revenant is all about naturalism & what is necessary and inescapable (if ghastly) given what happens to Leo whereas the final third of a film I can’t discuss for a while is, for me, sadistic and sickening — cynical, tongue-in-cheek “style” violence as its very worst. In short, this film inadvertently shined a nice contrasting light on The Revenant. Get past the wounds and the agony and the brutality of nature in the Inarritu and it’s basically sad and aching and soulful and almost serene. I really love it now. My initial concerns about the brutality evaporated tonight, like snow in the spring.

I’ve never received award-season swag of this kind — a double-vinyl foldout album of Johan Johansson’s Sicario soundtrack. 18 tracks. It doesn’t matter that I don’t have a turntable system. Impressive marketing equation: If they went to the trouble of making a two-record vinyl album it has to be impressive music…right? I don’t remember it all that clearly, but that’s considered a good thing for the most part. 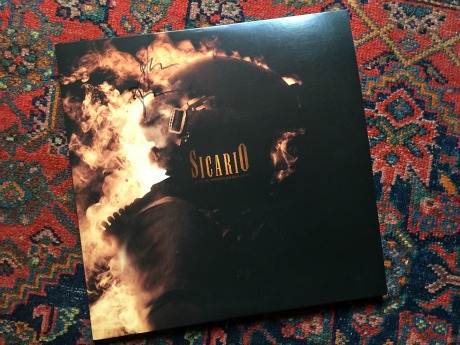 December 3, 2015 5:37 pmby Jeffrey Wells
35 Comments
The More I Assess and Calculate, The More Spotlight-y It All Seems

From Brooks Barnes and Michael Cieply‘s 12.3 N.Y. Times piece about the Oscar race, which isn’t so much about how the “Best Picture Race Puts Fox In A Tough Spot” as a general review of the players and their chances: “The Revenant, which has a SWAT team of publicists and awards consultants working on its behalf, is a visually arresting film that some Oscar forecasters have compared to The Tree of Life, Terrence Malick’s critically adored 2011 drama. Despite the gore in Mr. Inarritu’s movie — a horse is disemboweled, among other bloody sequences — New Regency sees “The Revenant as an audience pleaser, attracting multiplex crowds of men and women alike.” 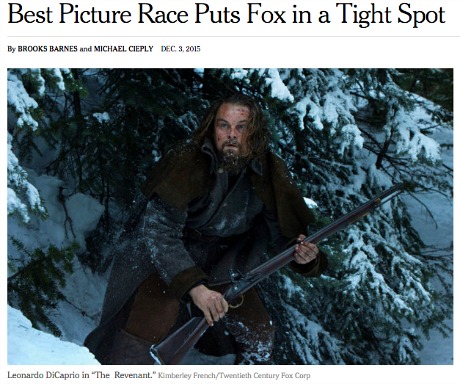 HE to Barnes/Cieply: The Revenant is beautiful and immersive — you don’t watch it as much as thrill and stagger around and suffer-by-proxy in your seat. But it’s no one’s idea of an audience-pleasing movie…unless you’re talking about an audience full of hardcore, Chivo-worshipping film nerds. If you ask me it’s not so much like The Tree of Life as Stanley Kubrick‘s The Shining. Which is to say it doesn’t tell that much of an involving story as much as smother you with rugged atmosphere and adrenalin and a kind of damp, sinewy blanket with burrs and thorns. Make what you will of it, but it stays with you. You can smell the snow, the campfire smoke, the sweat, the dread and the guts of the dead horse. It’s no picnic, but it’s something else. 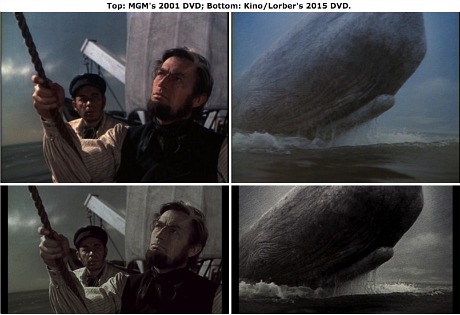 The instant that I read the names of yesterday’s husband-and-wife San Bernardino shooters — Syed Rizwan Farook, 28, and Tashfeen Malik, 27 — I said to myself, as did hundreds of thousands of others across the globe, “The fact that these guys are of Middle-Eastern ancestry and have Pakistan family ties means that somehow or some way the killings were probably prompted by Islamic wackzaoid theology and//or terrorist sympathies. I don’t want to think this way, but my gut tells me their ancestry is probably a factor.”

I couldn’t say this, of course, because p.c. culture would interpret this kneejerk opinion as the vile spewings of a racial profiler and bigot. So I kept my mouth shut, as did thousands of others. Better to hold your water & wait for hard info.

Today N.Y. Times reporters Ian Lovett, Richard Perez-Pena, Michael S. Schmidt and Laurie Goodstein reported that “the married couple suspected of killing 14 people at a social services center had built more than a dozen pipe bombs and stockpiled thousands of rounds of ammunition, officials said Thursday, and they fired as many as 150 bullets at victims and police officers in a rampage that shattered a quiet day and ended in their own deaths.

“The F.B.I. has begun treating its inquiry as a terrorism investigation, two law enforcement officials said Thursday. The suspects’ extensive arsenal, their recent Middle East travels and evidence that one had been in touch with people with Islamist extremist views, both in the United States and abroad, all contributed to the decision to refocus the investigation. But officials emphasized that they were unclear what set off the attack, and said they were not ready to call it terrorism.

“Law enforcement officials said the F.B.I. had uncovered evidence that Mr. Farook was in contact over several years with extremists domestically and abroad, including at least one person in the United States who was investigated for suspected terrorism by federal authorities in recent years. The officials spoke on the condition of anonymity because they were not authorized to discuss the matter publicly.

Two days ago model and AIDS activist Kathy Ireland told Entertainment Tonight that Elizabeth Taylor ran an underground network to provide experimental HIV medication to infected victims out of her home in Bel Air.
Ireland: “Talk about fearless in her home in Bel-Air. It was a safe house. A lot of the work that she did, it was illegal, but she was saving lives. It was in a time when it was not something to do. Business associates pleaded with her, ‘Leave this thing alone.’ She received death threats. Friends hung up on her when she asked for help, but something that I love about Elizabeth is her courage.” This story is definitely, obviously a cable movie and maybe even a feature. Certainly a great acting opportunity for a 40something or 50something actress who can become Liz.

If Nice Guy Eddie was to see this trailer for Batman v. Superman: Dawn of Justice, he might say the following: “You know what? I think it’s all that CG superhero comic-book mythology semen has been pumped up your ass so far and now its backed into your fuckin’ brain and its comin’ out your mouth.” In response to which Zack Snyder might say, “Eddie, you keep talkin’ like a bitch, I’m gonna slap you like a bitch.” I’ll say this much — Jesse Eisenberg‘s Lex Luthor is going to be fun to hang with. Note: I could have posted this last night but I didn’t care enough. I refuse to stand at attention and go “whoo-whoo!” like a little ComicCon bitch when a new superhero trailer comes out. I’ll take my sweet time posting it, and tough darts if that’s not good enough.

“We can’t put aside this annoying oversaturation of superheroes. Doesn’t it seem almost insulting? One superhero per film isn’t enough for these people, the executives are thinking. The moviegoer these days needs more stimulation, more explosions, more heroes, more villains! It’s like we’re subjects in a science experiment that have become immune to treatment so the researchers have upped our superhero dosage.” — from a post by Esquire‘s Matt Miller.