The good…okay, the interesting news is that Criterion will release a digitally restored Bluray based on a 4K harvest of John Frankenheimer‘s The Manchurian Candidate (’62) on 3.15.16. The bad news is that they’ve decided to chop the aspect ratio down to 1.85, which will deliver a bit less height than the 1.78:1 aspect ratio used for the MGM/Fox Home Video 2004 Bluray. Why oh why? The aspect ratios of ’60s-era Frankenheimer films have always fallen between 1.66 and 1.75, and I’m telling you there’s something wrong with people who decide to slice into a film and effectively destroy perfectly good visual information for no reason other than some notion that the film was originally projected in 1.85. 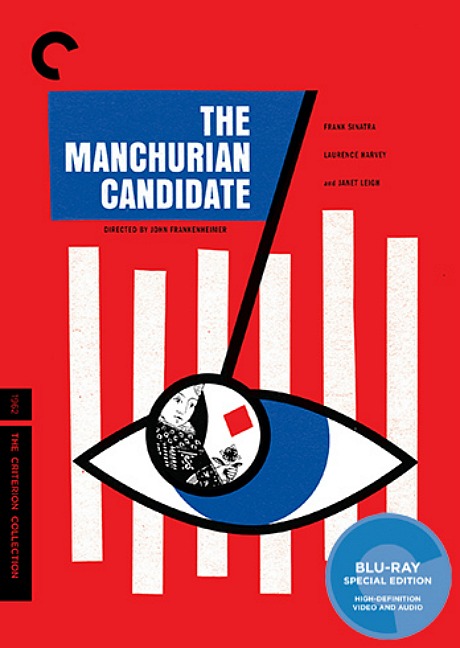 Would it do any good to say I’ve seen Candidate projected at 1.66:1 and that it looks beautiful that way? I can’t swear to it, but I recall that the MGM/UA laser disc of Candidate had a 1.66 a.r., and I know for an absolute damn fact that 1.66 was used for the MGM/UA laser disc of Frankenheimer’s The Train. Why couldn’t Criterion at least go with the 1.75:1 aspect ratio they used for their Bluray of Frankenheimer’s Seconds (’66)? Or the 1.78:1 a.r. that Frankenheimer’s Seven Days In May has been mostly seen within?

Did anyone like or even see Jared Hess‘s Don Verdean, which popped 12.11 on VOD? I caught it 11 months ago at Sundance ’15 and said the following (and yes, I know I’ve posted this a couple of times since): “I wanted to at least quietly enjoy this satire of rightwing religious foolery and fraudulence. But it just wouldn’t let me go there, and I’m saying this as a fan of Sam Rockwell, who plays the titular character — a bullshit archeologist and discoverer of Biblical relics. The only good thing is New Zealand-based actor-comedian Jermaine Clement, who plays Boaz, a corruptible Israeli guide.” Costarring Amy Ryan, Leslie Bibb, Will Forte and the demonic Danny McBride. Hess (Napoleon Dynamite) directed and co-wrote somebody from his family with the first name of “Jerusha.”

Tina Fey‘s performance as a war correspondent in Glenn Ficarra and John Requa‘s Whiskey Tango Foxtrot appears to be something outside her usual realm. The “journalistic dramedy” is based on Kim Barker‘s 2011 memoir “The Taliban Shuffle,” which chronicled her journalism adventures in Afghanistan and Pakistan. Then again pic’s approach has been described as “semi-fictionalized” — i.e., Barker’s tale shoehorned into a Tina Fey movie or a relatively honest adaptation with Fey-like humor and attitude thrown in…pick. I’m paying $30 something for Gogo in-flight wifi access and I can’t even snag the trailer’s embed code.

17 Comments
Chains of the Skyway

In a 12.17 Hollywood Reporter round-table discussion moderated by Stephen Galloway and Matthew Belloni and titled “Amy Schumer, Aaron Sorkin and Four More Top Scribes on Sexism and How to Deal With Steve Jobs’ Widow,” Schumer talks about last February’s Schumergate episode: “The things that you’re afraid they’re going to say are so much worse than anything they actually say. But you’ve already put your nervous system through that fear.

“With Trainwreck coming out, I was like, ‘Everyone’s going to say she’s not pretty enough to be in this movie.’ And then only one dude wrote that, and people really attacked him, and then he redacted that and wanted to date me. I’ve been waiting for this rainstorm of hate, and it’s never really come.”

Schumer isn’t far off but what I felt was more of a spiritual kinship thing. Her Trainwreck performance melted me down, and I became a total fan. As I wrote last July, “I was persuaded that the movie version of ‘Amy’ is who Schumer really is deep down, and that realization touched me like very few comedies have in my entire life. I’ll never say a word against her again.” And for expressing this I was called a phpny and a liar.

Yesterday afternoon I pulled into the WeHo Gelson’s (Santa Monica & Kings Road) and hung a right and then a left. There were two idling cars in their parking spots, youngish women at both wheels, presumably looking to exit but opposite each other and apparently concerned about who should go first. So neither moved. An old guy behind me honked and yelled “c’mon!” Then the woman closest to me (late 20s, brunette, new car) lurched slightly backward and then stopped, apparently worried about not having enough room behind her. But she was fine — all she had to do was back up and then turn and go. She was obviously the churchmouse type so I reversed two or three feet to give her more space. The old guy didn’t like this and honked again. But the woman still sat there. She turned in her seat and looked at me. Another honk. I got out and walked over to her vehicle (the window was rolled down) and said, “Want some help? I can guide you out.” Woman: “Can you back up a bit?” Me: “I’ve already backed up and there’s a guy honking behind me. You’ve got plenty of room. You can do it…really.” She sighed and frowned and then VERY slowly began to back out. It took her a good two minutes so make it into the middle lane and leave. I could offer a gender generalization but I’d just get into trouble on Twitter again. But try to imagine a self-respecting dude causing a Gelson’s logjam like this.