Support on Patreon Follow @wellshwood
11 Comments
“What Are You Doing In There”?”

Set in the shag-ruggy ’70s and based on J.G. Ballard’s novel, Ben Wheatley‘s High-Rise is a creepy thinking man’s comedy that you don’t exactly “laugh” at. Call it a perverse social dreamscape, a nightmarish macrocosm of the things that afflict anyone with a hunger for the usual empty comforts. Oddly humorous, bizarre, fetishy. It reminded me of Lindsay Anderson‘s Brittania Hospital (’82) in some respects. I caught it last September in Toronto; it opens in England on 3.18. Tom Hiddleston, Jeremy Irons, Sienna Miller, Luke Evans, Elisabeth Moss, James Purefoy.

The BAFTA nominations pop tonight just after 11:35 pm Pacific (i.e., tomorrow morning in London at 7:35 am. The lastwordonearth guys are tipping the following: (a) “The big local players are 45 Years and Brooklyn” — shocker, (b) Charlotte Rampling, Saoirse Ronan and Maggie Smith will nab Best Actress nominations, (c) The Fucking Martian‘s Matt Damon will go head to head with Leonardo DiCaprio but lose in the end, even if no one really loves The Revenant, and Ridley Scott (a.k.a. “Sir Ridders”) is in the lead position in BAFTA’s Best Director competish, (d) Alicia Vikander will land a Best Supporting Actress nom for The Danish Girl, which no one loves, (e) Bridge of Spies‘ Mark Rylance has the Best Supporting Actor award in the bag; (e) Lenny Abrahamson‘s Room “isn’t being discussed much around the scene” (it’s dying everywhere), (f) reactions to The Big Short have been “muted, (g) Kate Winslet is a “lock” for Best Supporting in Steve Jobs with Carol‘s Rooney Mara her toughest competitor, etc. I’m sorry but the BAFTAs have never accelerated my pulse rate.

Ten years ago I felt suitably stirred by Stephen Frears‘ The Queen and particularly by Helen Mirren‘s Oscar-winning performance as Elizabeth. The royals returned four years later with The King’s Speech and four more Oscars were claimed, including Best Picture and Best Actor (Colin Firth). Now they’re back again via Netflix’s The Crown — six seasons worth at ten one-hour episodes per season, each spanning a decade in Elizabeth’s 62-years-and-counting reign. Budgeted at $165 million, created/written by Peter Morgan and directed by Stephen Daldry. (All 60 episodes?) Claire Foy as Princess Elizabeth, Matt Smith as Philip Mountbatten, John Lithgow as Winston Churchill, Greg Wise as Lord Louis Mountbatten, Vanessa Kirby as Princess Margaret (great lookalike), Jared Harris as George VI, etc. Best wishes to Netflix and the team. Quite a commitment.

In a sense my late mom has treated Jett, Cait and myself to a 10-day Vietnam visit in late March. Bicycles, scooters, street food, earthy aromas, exotic atmospheres, helmet GoPro, etc. Hanoi, Dong Hoi and Paradise Cave, Hue, Hoi An, My Son. Anthony Bourdain will be…well, one of our spiritual guides.

Nine business days before everyone leaves for Sundance and there are still no screening opportunities to see Joel and Ethan Coen‘s Hail Caesar! (Universal, 2.5). Or at least none I’ve heard about. Everyone returns from Park City by the weekend of 1.29 to 1.31, leaving only five days before the opening. Here’s hoping for a screening next week or at least on Monday, 1.18 or Tuesday, 1.19. Yes, I’m being repetitious, even tedious. 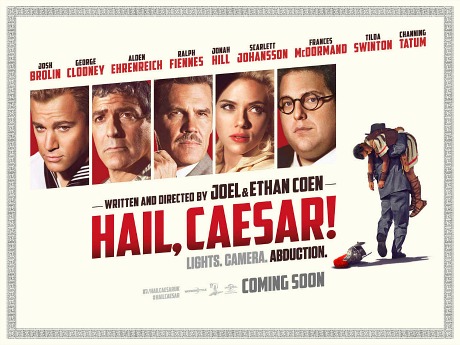 13 Comments
Relativity Refreshed, But Why?

I’m as amused as the next guy by the news about Trigger Street partners Kevin Spacey and Dana Brunetti being tapped to run the new, restructured, post-chapter 11 Relativity Media. We all love the idea of Buddy Ackerman actually running a real movie company, etc. But can I ask a question? Why is Relativity even in business? Who cares? The company went totally bust last year under Ryan Cavanaugh, trapped in a muddy, 75-foot-deep sinkhole and finally forced to face reality. Nothing against Spacey and Brunetti but what magic, exactly, are they expected to create? I know as much as they do, my gut instincts are just as well attuned and I’m more free-form and fuck-all in my thinking. You know what I would do if I ran Relativity? I would hire LexG as vp creative affairs. (I would greenlight films with a potential to compete during award season and Lex would advise about which stupid movies to make.) Over the last year has anyone said to anyone else over a drink, “You know, I’m really upset that Relativity went bankrupt…I know if they could just hire the right people to run things correctly that Relativity could really make a difference to the average moviegoer…I hope they get it together….we need companies like Relativity to brighten and enrich our moviegoing lives.” Newsflash: Nobody gives a shit. But with Wells and LexG calling the shots, electric bolts of excitement would be pulsing through the Hollywood bloodstream.

If Joel Edgerton has a significant role in an unseen film, I know I’m going to have at least a moderately difficult time with it. I’m sorry but he rubs me the wrong way. His vibe, those little pig eyes, his actorishness. Edgerton was cool in Animal Kingdom (’10), Warrior (11) and Zero Dark Thirty (’12), and I admired his on-stage performance as Stanley Kowalski in a 2009 BAM production of A Streetcar Named Desire, in which he costarred with Cate Blanchett. But I started to develop prickly feelings after seeing him portray a lying, squirrelish husband in 2013’s Wish You Were Here. And then three recent performances turned me flat-out against him — his eye-linered Ramses in Exodus: Gods and Kings, Gordo the weirdo in The Gift and especially his dirty FBI agent John Connolly in Black Mass. Edgerton’s Bahstun accent, his ’70s hair, those light blue three-piece suits…torture. 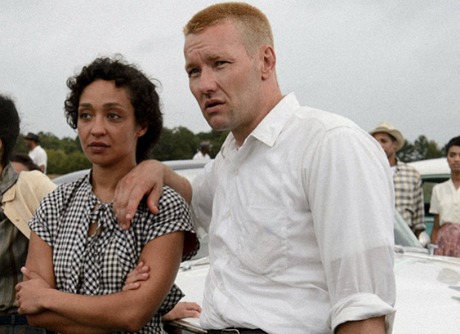 My spirit sank yesterday when I noticed Edgerton is costarring with Ruth Negga in Jeff Nichols‘ Loving, a fact-based period drama about a once-controversial interracial marriage between Mildred and Richard Loving, which resulted in the couple being sentenced to prison in Virginia in early 1959. The conviction was argued through the courts in the mid ’60s, and was finally overturned by the Supreme Court in June 1967. I’m thinking this over and I know that Edgerton (who’s wearing a ’50s flattop and has dyed his hair blonde for the film) is going to make me sigh and grumble and shift in my seat. I dread grappling with his Southern accent. If only Nichols had cast Joaquin Phoenix or James Marsden or even Casey Affleck instead.