The Revenant‘s triple-slam win at the Golden Globes tonight (Best Picture Drama, Alejandro G. Inarritu for Best Director, Leonardo DiCaprio for Best Actor) was a major surprise for everyone. Add the film’s unexpected weekend take of $39 million and you’re looking at a likely snowball effect. If (and I say “if”) next weekend’s Critics Choice Awards celebrates The Revenant in similar fashion the Oscar race will be wide open for bear. I still think Spotlight has the edge to win the Best Picture Oscar as the Globes are only the Globes, but there’s no denying that over the last three days The Revenant seemed to suddenly bust out of its cage. I don’t know how many “expert” handicappers didn’t predict tonight’s big win but I’ll guess that most were just as gobsmacked as I was. I wouldn’t be surprised if some of them talk down the Revenant‘s triple-crown win tomorrow as big surprises like this make them look a little bit clueless. I asked several people at the 20th Century Fox after-party if they would have bet money on The Revenant doing what it did, and they all said “nope.” 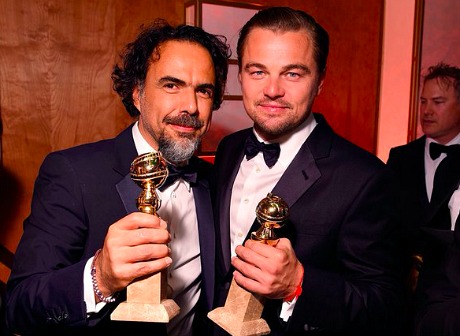 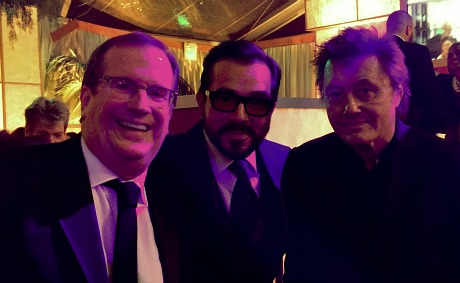 8:02 pm: Will The Revenant steal the Best Picture — Drama from Spotlight? Yes, that’s just happened. Shocker — really, really unexpected. What a mindblower, what an unexpected triumph…whoa. Who predicted a three-award sweep for one of the roughest sits of the year? The Revenant is the show’s wowser winner. The Spotlight guys must be in shock…sorry but again not sorry.

7:41 pm: Jim Carrey wickedly mocking the “two-time Golden Globe winner” intro. And the Best Motion Picture Comedy award goes to The Martian, hands down the biggest laugh riot of the year. This, ladies and gentlemen, is the realm of the Golden Globes. HE to readership: What are your favorite laugh-riot moments in this wonderfully satisfying film? Seriously, The Martian is a very well-made entertainment. Cheers for any win it manages to get from the HFPA, no matter how loony the classification might be.

7:32 pm: Another surprise win — Jennifer Lawerence takes Best Actress Comedy award for Joy. Did anyone see this one coming? Thank God they didn’t give it to The Lady In The Van‘s Maggie Smith. I would have preferred a win by Trainwreck‘s Amy Schumer but this is fine.

7:23 pm: Alejandro G. Inarritu wins Best Director award for The Revenant! What a weekend for The Revenant with the unexpectedly huge box-office and now this. Sorry, Scott Feinberg, but no Gold Watch award for Ridley Scott. Fucking wifi just died in Fox Pavillion so I’m on the iPhone now. Okay, it’s back now. What a shocker. Did anyone see this coming? Very happy and gratified.

6:53 pm: Ricky Gervais announcing that he’s “in the awkward position of having to introduce” Mel Gibson again after insulting him some years back. Kicker: “I’d rather have a drink with [Mel Gibson] tonight, in his hotel room, than with Bill Cosby.” Another: “What the fuck does ‘Sugartits’ even mean?” Best Golden Globes moment so far?

6:39 pm: Laszlo Nemes wins Best Foreign Language Golden Globe for Son of Saul! This is the first time tonight that things have really gone Hollywood Elsewhere’s way. It’s been a bit of a weird show so far. Hooray for Lady Gaga, whose facial features I’m still trying to assimilate and hang onto. Nobody cares about Best Song.

6:28 pm: Aaron Sorkin wins Screenplay Award for Steve Jobs, a movie that wasn’t especially lovable or satisfying and which tanked when it went wide? Spotlight was supposed to win this handily. This is the second Jobs shocker of the night after Kate Winslet winning for Best Supporting Actress, all but stealing it from Alicia Vikander.

6:19 pm: J.K. Simmons and Patricia Arquette announcing winner of the Golden Globe Best Supporting Actor award, and…Sylvester Stallone takes it. Okay, roll with it — Sly was very,very good in Creed. Kicker: “I’m gonna thank my imaginary friend Rocky Balboa for being the best friend I ever had.” But he doesn’t thank Ryan Coogler.

6:15 pm: Kurt Russell and Kate Hudson announced Golden Glove for Best Animated Feature: Inside Out. No joy in Mudville about this one. Anomalisa should have won. Bored with Pixar dominance.

I never cared for Phantasm (’79, a low-budgeter in which Angus Scrimm‘s “Tall Man” character first appeared, and so I never asked to be part of the press junket and therefore never met Scrimm. If I’d met him I wouldn’t have known what to say. But due respect on this, one day after his passing at age 89. 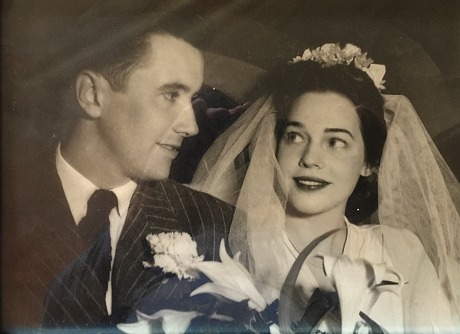 Richard Libertini‘s three defining roles, in this descending order: (a) the traveling vaudevillian who arrived on Sam Shepard‘s estate in a biplane in Terrence Malick‘s Days of Heaven (’78), the Latin American dictator who worshipped black velvet artwork in Arthur Hiller‘s The In-Laws (’79) and the robed spiritual advisor Prahka Lasa in Carl Reiner‘s All of Me (’84). I’m sorry but these are the three I remember. No recollection whatsoever of his work in Popeye (’80), Sharky’s Machine (’81), Soup for One (’82), Best Friends (’82), Deal of the Century (’83), Fletch (’85), Awakenings (’90), The Bonfire of the Vanities (’90)…nothing. Libertini passed yesterday at age 82.

For whatever reason I decided to go soft when I riffed yesterday about the new trailer for Gary Ross‘s Free State of Jones (STX, 5.13). The hints of mediocrity were there, of course, but I figured “hey, go easy for now….plenty of time to dump on it later.” But Esquire‘s Sarah Pense didn’t give a damn. “Historical accuracy notwithstanding (the film is based on a true story), the trailer is pretty awful, littered with overzealous acting and over-the-top speechifying,” she wrote. “It’s hard to shake the feeling that Ross is remaking The Hunger Games, just with more facial hair and less teen angst. The McConaissance may be over.” Hats off to a woman who’s gamer than myself, at least in this instance.

January 10, 2016 1:22 pmby Jeffrey Wells
39 Comments
In All Modesty, I Believe My Fully-Apologized-For “Forget Women Seeing This” Tweet Generated 5% of the Revenant’s $38 Million Take…Seriously

Alejandro G. Inarritu‘s The Revenant opened much bigger this weekend than many expected with $14 million on Friday and about $38 million expected by tonight. I honestly and truly believe that my fully-apologized-for tweet in which I said “forget women seeing this” created a groundswell viral chain reaction among defiant under-40 women who said “Oh, yeah? Well, I’m seeing it!” I’m not saying this was a major factor. The success of this masterful film was almost entirely driven by rave reviews and a little bit of bear rape. But I am suggesting that the Wells-tweet-pushback may have accounted for…oh, 5% of the attendance. You don’t earn almost $40 million over three days from just guys. It played a small part — that’s all I’m saying, and I really don’t think I’m being self-aggrandizing in stating this. That tweet became a “thing” and things have a way of creating cultural ripples.

I dawdled all morning and now I’m fucked with only four hours to file before going to the Golden Globes awards, which in my case means driving over to Century City for a shuttle that will take at least 15 minutes to navigate the barriers surrounding the Beverly Hilton garrison state . The 20th Century Fox viewing party begins around 4 pm, I guess. Black suit, black tie, cool shoes, cruel shoes…as long as they’re not brown.

Best Motion Picture — Drama: Will Win — Spotlight / Should Win — Spotlight…even though I have to say that The Revenant has continued to grow and grow in my head and Mad Max: Fury Road, my third place favorite, is an epic apocalyptic action film that will be part of the streaming conversation for many years to come.

Best Motion Picture — Comedy or Musical: Will Win — I know I should predict The Martian but the more hoo-hah that accumulates around this smart but lightweight rescue flick, the more I feel like putting it down. Plus there’s no way that the biggest and whoriest HFPA contortionist can call The Martian a “comedy”…get outta here! So I’m going to predict The Big Short because its rep has been ascending for the past couple of weeks. The question is whether or not HFPA members have been hip enough to pick up the signals.

Best Director — Motion Picture: Will Probably Win — all hail Ridley Scott (a.k.a., Mr. Gold Watch) for totally succumbing to corporate escapism and betraying the impulses that led to the making of one of his greatest films, also for 20th Century Fox — The Counselor. Should Win — Alejandro G. Inarritu for The Revenant and/or George Miller for Mad Max: Fury Road.

Best Performance by an Actor in a Motion Picture — Drama: Will Win/Should Win: Leonardo DiCaprio, The Revenant. He’s rich, he shoulda won it for The Wolf of Wall Street, he’s due, he’s been slamming it for 23 years, he suffered in Alberta, ate the liver, etc. Who could vote for The Danish Girl‘s Eddie Redmayne? Somebody tweeted this morning that they deserve an Oscar for watching Tom Hooper‘s film.

Best Performance by an Actress in a Motion Picture — Drama: I know I should predict Room‘s Brie Larson, but I hated, hated, HATED so much of Lenny Abrahamson‘s film (except for the escape-and-salvation sequence and the touching finale) that I just can’t do it. I can’t do it! Should Win/Might Win: Brooklyn‘s Saoirse Ronan, a consummate pro who totally deserves the prize.

Best Performance by an Actress in a Motion Picture — Comedy or Musical: Should Win/Oughta Win — Trainwreck‘s Amy Schumer. She touched bottom and found the ache and the longing in this smart, impudent Judd Apatow comedy, and truly out-pointed her competitors (Grandma‘s Lily Tomlin, The Lady In The Van‘s Maggie Smith, Joy‘s Jennifer Lawrence, Spy‘s Melissa McCarthy) in the bargain. I don’t want to hear about any kneejerk Maggie Smith sentiment. Way too many trophies and accolades…enough.

Best Performance by an Actor in a Motion Picture — Comedy or Musical: Will Win — Matt Damon, The Martian. I would prefer to see Steve Carell or Christian Bale win for their Big Short performances, but I know it’s not gonna happen.