Legendary director-writer John Sayles is making three appearances (one tonight, two tomorrow) during a tribute at Cinefamily. “A Weekend With John Sayles” rundown: Brother From Another Planet and Piranha (Friday, 2.19, 7:30pm); Master Filmmaking Class w/ Sayles + City of Hope at (Saturday, 2.20, 3pm); Lianna & Baby, It’s You (Saturday, 2.20, 7:30 pm). We did a phoner two or three days ago — sorry for not posting sooner.

(More…)
February 19, 2016 3:14 pmby Jeffrey Wells
5 Comments
Fickle Rectum Could Be Name Of One Of The Characters in Suicide Squad 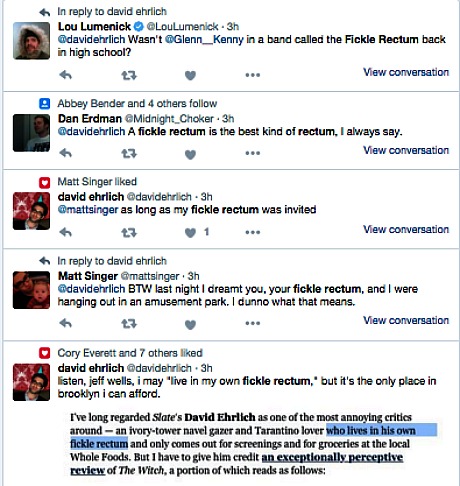 Earlier today Dark Horizons‘ Garth Franklin reported that the release date of Oliver Stone‘s Snowden has been bumped again. It was initially shifted from late December (two months ago) to 5.13.16. Now Open Road has pushed it back to 9.16.16. Franklin has written that this puts it “back into awards contention”, but opening a movie in the middle of the 2016 Toronto Film Festival (which will run from 9.8 to 9.18) is not a good award-season strategy.

A mid-Toronto Film Festival opening is actually a telegraphed message to critics and award-season blogaroonies as follows: “Snowden is a first-rate Oliver Stone spy thriller but honestly? Thrillers are thrillers and we’re fine with it being a smart piece of adult entertainment. We don’t really see it as an awards contender. If we did we’d obviously open it sometime between mid October and early December. But we don’t want to open it in the summer either because the subject matter doesn’t fit the warm-weather paradigm so this is a reasonably good fit.”

Last December I complained about what I believed was an intention by Criterion to to present The Manchurian Candidate within a 1.85:1 aspect ratio. The info was wrong — the forthcoming Bluray is matted at 1.75:1. I didn’t imagine the 1.85 so I’m guessing it was posted on the Criterion website page and then changed. In any event, 1.75 is an acceptable format. 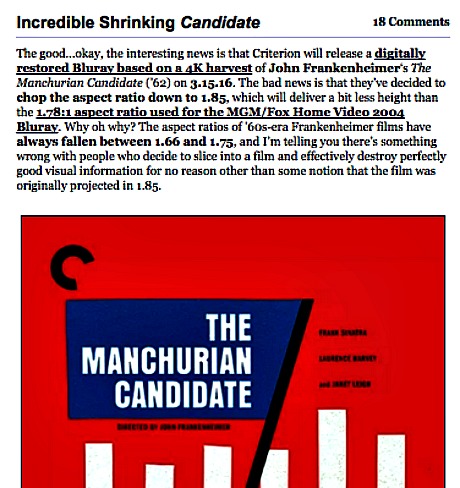 Hollywood Elsewhere to Matt Atchity of Rotten Tomatoes, Tim Gray of Variety, Nicole Sperling of Entertainment Weekly, Sasha Stone of Awards Daily and Glenn Whipp of the L.A. Times: Last night I caught my third viewing of The Big Short. I saw it with a first-timer (a lady who knows the markets) at the Landmark on Pico. Loved Ryan Gosling, still irritated by Christian Bale (Aspergers personality , odd teeth , bare feet). It’s a very smart, sometimes funny, engaging-as-far-as-it-goes tutorial and a total Bernie Sanders movie…great! Politics aside I liked it better than I did the first time and about as much as I did the second, but it doesn’t have that Best Picture schwing…it just doesn’t. I think it’s obvious that em>The Revenant will take the Best Picture Oscar. And yet you’re continuing to predict a Big Short win on Gold Derby.com. And that’s totally fine. I admire your fortitude. But could you share your reasons why? Above and beyond the statistical precedent factor or the PGA vote? Gut-wise, what tells you that it has a decent shot? Because the lady I saw it with last night was going “it’s too hard to follow…it’s not well-organized, Bale is too weird, I liked Spotlight much better,” etc. 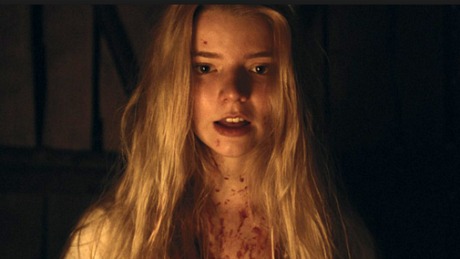 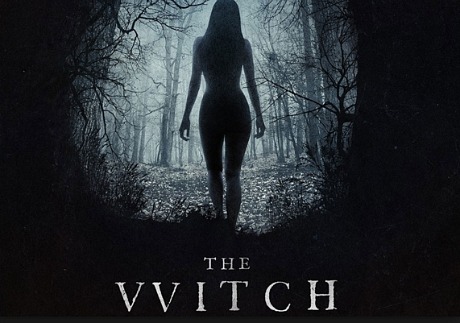 Harper Lee didn’t quite make it to 90, but calendar years were barely of interest when it came to her legend, which became fixed and gleaming when “To Kill A Mockingbird” was published in 1960, and particularly after Robert Mulligan, Horton Foote, Gregory Peck and Alan Pakula released their film version on 12.25.62. Last year’s publication of “Go Set A Watchman,” which was sold as a “Mockingbird” sequel but which was basically an early “Mockingbird” draft when Lee first submitted it in 1957, was regrettable, but certain parties wanted the payday.

Written by Gregory Peck for the paperback edition of “Mockingbird”: “The Southern town of Maycomb, Alabama, reminds me of the California town [i.e., La Jolla] I grew up in. The characters of the novel are like people I knew as a boy. I think perhaps the great appeal of the novel is that it reminds readers everywhere of a person or a town they have known. It is to me a universal story — moving, passionate and told with great humor and tenderness.”