In a 3.1 N.Y. Times analysis piece titled “As Donald Trump Rolls Up Victories, the G.O.P. Split Widens to a Chasm,” reporters Jonathan Martin and Michael Barbaro quote Tim Pawlenty, former Minnesota governor and Republican candidate for president, as follows: “If the Republican Party were an airplane, and you were looking out a passenger window, you would see surface pieces peeling off and wonder if one of the wings or engines was next.”

I’m presuming that Donald Trump and his supporters are going to love London Has Fallen (Grammercy/Lionsgate, 3.4). This London-based sequel to Olympus Has Fallen is a crude, gut-level, kill-the-terrorists flick that shows 80 or 90 bad guys getting drilled for their lunacy — the kind of justice that every Trump voter pines for. And yet the movie doesn’t, in the end, have the balls to cut off heads. It wants to but hasn’t the courage of its convictions. I know that sounds weird but hear me out.

London Has Fallen definitely struck me as a reflection of aggressive Trump values — racism, rage, intemperance, militancy. The bad guys are a small army of Middle-Eastern terrorists, and boy, does Gerald Butler‘s Mike Bannon waste these America-hating fucks like there’s no tomorrow…die, die, die, assholes! 90, 100…I lost count.

London Has Fallen is also dumb as a pile of rocks, but what’s a little idiocy between fans and filmmakers? It doesn’t do the spade work, it doesn’t care about logic or realism…nothing. It’s just recycling cliches and humiliating the cast.

At least a couple of hundred ruthless, well-funded terrorists kill a lot of government leaders and security guys and all but reduce London to Fallujah, but except for the appearance of a squad of British SWAT guys who show up in Act Three there is next to no response to the attacks by the British military. Which struck me as bizarre. The resistance mostly boils down to Butler and Aaron Eckhart‘s President Benjamin Asher — a couple of armed bros vs. a gang of ISIS-like demon fiends. (Yes, the baddies are technically doing the bidding of a ruthless 50something arms dealer but we all know what the shot is.)

Yes, London Has Fallen is occasionally “funny” (guys were chortling now and then during this morning’s press screening) but not, for my money, funny enough. By which I mean truly self-lampooning. And why not? Nobody takes this shit even half-seriously so why not go full comedy? Instead all we get are the usual hard-boiled, self-regarding macho quips (straight out of the classic Die Hard playbook) but London never really cuts loose like Roland Emmerich‘s White House Down, which didn’t make as much money as Olympus Has Fallen but was a far more enjoyable film.

All-media screenings happen on Monday, Tuesday or Wednesday evenings. (Especially Tuesdays.) Family-friendly flicks will sometimes show at all-media screenings on Saturday morning or afternoon. But nobody and I mean nobody books an all-media screening for 4 pm on a Wednesday, which is what the Sony guys have done for Louis Leterrier‘s The Brothers Grimsby. Pic opens on 3.11. It opened in England on 2.24 under the title of Grimsby, pulling a 50% Rotten Tomatoes rating and 46% on Metacritic. 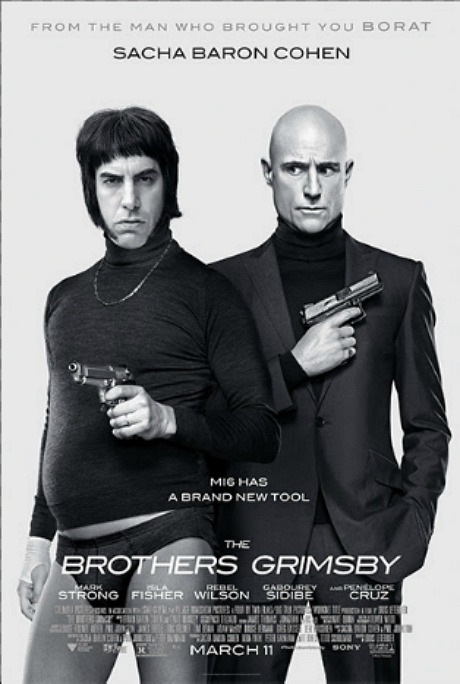 The fact that director Cynthia Mort filed a lawsuit nearly two years ago against producer Ealing Studios Enterprises should tell you plenty. Here are some of the lawsuit details.

I don’t want to see Nina anyway. Self-destruction is boring, and I’ve already done time with Liz Garbus‘s Oscar-nominated What Happened, Miss Simone? — a respectable effort in this equation.

Here’s how Collis idiotically puts it: “How could we cheer up Nina Simone fans about the documentary What Happened, Miss Simone? losing to Amy at the Oscars last Sunday? Well, how about this: EW can exclusively reveal that Nina, a years-in-the-making biopic of the so-called ‘High Priestess of Soul’, will be released to theaters and on VOD, April 22. Directed by Cynthia Mort, the movie stars Guardians of the Galaxy and Avatar actress Zoe Saldana as Simone and Selma actor David Oyelowo as her assistant-turned-manager, Clifton Henderson.”