A veteran filmmaker reminded me yesterday that Breakout, a 1975 B-grade action flick that’s basically about a helicopter pilot (Charles Bronson) air-lifting a framed American prisoner (Robert Duvall) out of a Mexican jail, was the first film to open via wide saturation booking, and not Jaws, which usually gets the credit/blame.

After Breakout opened on 3.6.75 in several hundred theatres (a radical, roll-the-dice move at the time) and took in a then-respectable $7.5 million domestic, Universal chairman Lew Wasserman and studio president Sid Sheinberg decided to ape this strategy by opening Jaws, which they knew would be a big hit, on 6.20.75 in a similar fashion.

The initial Jaws plan was to open it in 900 theatres, but Wasserman cut that figure down to 464. Wikipedia claims that Breakout opened on 1300 screens, or nearly three times the opening-day screen count of Jaws.  The veteran who reminded me about Breakout recalled a screen tally more in the 600 range.

I just think it should be recognized or remembered that the Breakout guys were the saturation pioneers and not the Jaws copycats.

The Los Angeles-residing Matthew Warren has been making alternative movie posters for the last four years. His company/URL is called Paper8. Message: “My practice combines movie posters with the construct of cinema and celebrity culture” — okay.  For Warren’s latest project he has eight (8) billboards up around the Hollywood area. Locations include Sunset Blvd. & Stanley Ave. (4.11 – 5.9); Melrose Blvd/Larchmont Ave (4.18 – 5.16); Santa Monica Blvd/Vine St (4.25 – 5.22); and Highland Ave. and Willoughby Ave (4.25 — 5.22). 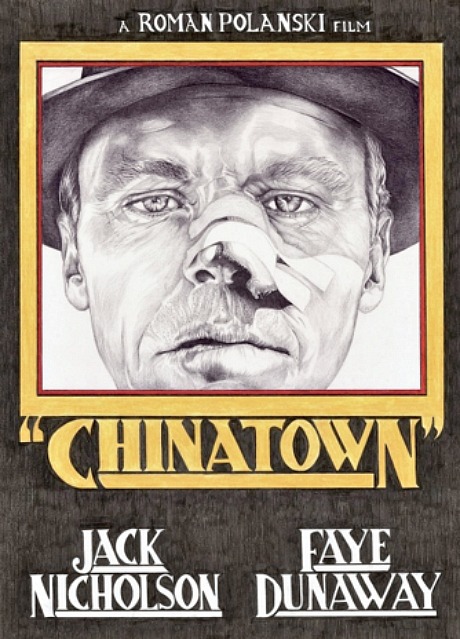 There’s something about texting that over-50 women seem to resist or otherwise have trouble with. I’m convinced that on some level they feel that texting constitutes a violation of their soul space and are therefore enacting little rebellions by taking their sweet-ass time to respond or claiming they never got them, and in so doing are protecting their privacy. Either they don’t get back to you until three or four hours have passed, in part because they haven’t assigned a text tone that alerts them when a text comes in, or they’ll shut their phones off when they’re working or whatever, or they’ll leave it on the kitchen counter or the bedroom bureau when they go shopping or out with friends or to the gym. One way or another they’re always slow to get back. But all of this changes when you’re dealing with women in their early to mid 40s and younger. There’s some kind of generational dividing line. Older GenXers (those born in the early to mid ’60s) respond when they get around to it, but younger GenXers are almost always respond. Millenials, of course, don’t even think about it — they always text back, usually within minutes if not seconds. Me? I always respond to a text within five or ten unless it’s somebody I’d rather not deal with, in which case I’ll delay for an hour or two. Guys in general tend to be pretty good about texting, but older women are weird. Forget boomer women — 75% of them are technical klutzes on top of the attitude thing.

34 Comments
Ask Yourself — How Likely Is It That Clinton Will Serve Two Terms?

Ronald Reagan was a few days shy of 70 when he was first sworn in as President on 1.20.81, and was just a few days away from turning 78 when his second term ended on 1.20.89. Hillary Clinton will be 69 and 1/4 when she takes office next January, and will be 77 when she wraps her second term, if and when. I’m not predicting or presuming anything, but I wonder how invested she’ll be in being re-elected in 2020 or (I’m just speculating) she might be of a mind to pass the torch and get a little r & r with her grandkids while she has the time and the health. Bernie Sanders wouldn’t back off at all if he got elected. He’ll work the treadmill, lift weights, eat right and charge on until his late 90s. Bernie will bop until he drops. But Hillary…who knows? And what about Gavin Newsom? Because after Hillary’s two terms, the electorate will definitely be in a mood for someone without a cackly laugh or a neck wattle. And you know what else? By the time Hillary leaves office in 2025 it’ll be time for a Millenial presidential candidate or two. I define Millenials as those born in the mid ’80s and beyond, so right now the oldest Millenials are about 30 and by ’23 or ’24 they’ll be in their late 30s and/or pushing 40, or three or four years older than they legally need to be to run for President (i.e., 35).

Before this morning I had honestly never seen this extended hand-held shot from Robert Drew‘s Primary, which is included in Criterion’s forthcoming Bluray of The Kennedy Films of Robert Drew (4.26). Boilerplate: “In one of the most famous shots in all of documentary history, Albert Maysles’s camera follows JFK into Milwaukee’s American Serb Hall. Primary, which documents the Wisconsin 1960 presidential primary, was shot on a camera engineered specifically by Drew and his team to allow for sync-sound recording, a feature that made the entire genre of cinema verite possible.”

Once upon a time movies were about more than just attempts to connect and make money. To some extent they also reflected our culture, values, history, goals, dreams, conflicts, etc. We all realize that except for X-factor oddities like Money Monster and The Family Fang and the usual award-season titles, the socially reflective aspect has all but disappeared from theatres and migrated to cable and streaming. American movies used to be cousins of literature and theatre — now movie theatres are more or less amusement parks for under-25s and the none-too-brights. Look at a rundown of releases from any month in the ’80s, ’70s or ’60s and you’ll see the usual mixture of fluff, drama, fantasy and social realism. And look at the movies that are happening right now — what do they say or indicate about where your average moviegoer is at intellectually, morally and spiritually? Yes, I realize that April releases tend to be on the skanky or swampy side but really…what does this rundown tell you about the U.S. of A.? If you were God and were looking down from the clouds upon a country and a culture that you had often been proud of and stirred by during the first 200-plus years, what would you be feeling as you review this sad list of films? There’s only one with a potent combination of smarts, style, craft and social urgency — Gavin Hood‘s Eye in the Sky. (Here’s my 3.9.16 review.) 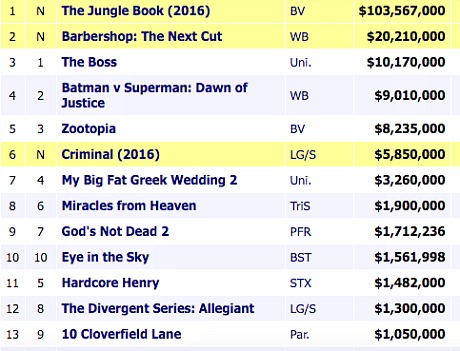