Support on Patreon Follow @wellshwood
29 Comments
“I Hate To Disappoint, But I’m Not Really Feeling It” — A Rallying Cry For Discerning Viewers of Captain America: Civil War

There’s one thing that everyone who sees Captain America: Civil War will absolutely agree upon, and that is the fact that it peaks with the Berlin airport brawl (BAB), which arrives around the 85-minute mark. Yes, I’ve mentioned this before but the entire world seems to be saying it now.

From A.O. Scott’s N.Y. Times review: “The best part of the movie is a six-on-six rumble at an airport, in which two teams of costumed co-workers, with a few ringers in the mix, face off to work out their issues. The battle is entertaining precisely because the stakes are relatively low. No planets, cities or galaxies are in peril, and you can enjoy the spectacle without any of the usual action-movie queasiness about invisible and extensive civilian casualties. And there is a solid, satisfying physicality to the effects.”

This couldn’t be less important in the grand scheme of things, but to my knowledge this photo of a 1969 gathering for John Wayne‘s 62nd birthday contains the only color image ever printed or posted of Fred Macmurray without his rug. I remember seeing a b & w photo of an un-toupeed Macmurray many years ago, but this is the first color snap I’ve seen in my entire life. I’m sorry if it sounds inane, but I pay attention to this stuff. 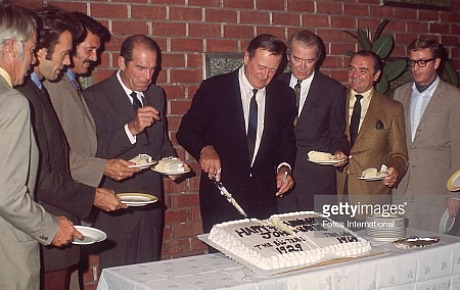 I’ve always regarded indie-realm publicist Mickey Cottrell as a crafty and diligent hombre who knows the right people, always manages to push the right buttons, has excellent taste as far as the films and filmmakers he represents, and is a mensch on top of all that. And he’s a fairly decent actor besides. 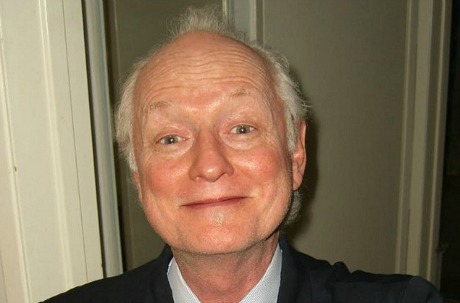 In any event poor Mickey has been hit with a debilitating stroke, and I’m told his insurance won’t quite cover the 24-hour care that he’ll be needing. On top of which he also needs help with living expenses as he won’t be able to earn while he’s recovering. Cottrell’s friends have set up a compassionate GoFundMe campaign, and are asking all who know and love the guy (he’s been around forever) to throw in whatever they can afford.

The last time I threw in dough for a colleague was when journalist-critic Ed Douglas was having difficulty two or three years ago. Tough times happen to the best of us. Good friends and fellows rally round on such occasions.

29 Comments
If You Insist on Remaking Death Wish…

There’s a plan, I’m told, to possibly remake Death Wish with Bruce Willis as Charles Bronson‘s Paul Kersey. Or something like that. Right away I wondered why with Chuck Russell‘s I Am Wrath (Saban, 5.13), about an unemployed engineer (John Travolta) going vigilante when the cops fail to bring his wife’s murderers to justice, sounding like a fairly close remake of Michael Winner’s 1974 film.

I’m not saying the alleged Willis project will happen, but if it does it would be processed, along with the Travolta flick, as yet another entry in the grizzled-action-star-urban-whupass genre. Which began eight years ago, of course, with Taken and the launching of the more specific grizzled-dad-looking-to-save-imperiled-daughter genre. Liam “paycheck” Neeson pretty much owned the turf until the first Expendables flick popped in 2010.

All to say that I’m sensing a fatigue factor over the grizzled bad-ass white guy thing. It seems that the only way to inject fresh energy into a Death Wish remake, if that’s what you really want to do, is go with a grizzled black guy.

The new Death Wish needs to have a serious 2016 cultural context. What real-deal situation or attitude or trend will it reflect? The Bronson version drew on an early ’70s Manhattan that really did have a crime/urban decay problem — not so much now. Bernhard Goetz obviously redefined vigilantism in the ’80s, and not in a heroic way. So what’s the best angle for a newbie?

Kenneth Turan‘s 5.5 L.A. Times review of Captain America: Civil War contends that the film will play much better for hardcore Marvel devotees than for the less fanatical or the uninitiated. The underlying suggestion is that perhaps Turan himself struggled to recall all the backstory connections when he saw it, but we’ll let that go.

While reading this a related thought came to mind, which is basically that there may be a current of personal expression in CA:CW as well as Batman v Superman that hardcore fans might be missing. Okay, so it’s not related.

Both are about responses to blowback over mass urban destruction caused by battles between superheroes and supervillains. Batman is hugely pissed at Superman for the destruction caused by his battle with General Zod in Man of Steel, and the Avengers have been told by governmental authorities that vast wreckage and public trauma caused by previous slugfests requires them to agree to U.N. supervision.

You could theoretically use the following as either a subtitle or copy line on the ads for both films: Out of control, gone too far — now it’s time for consequences.

But all this chaos and charred rubble (which has also been abundant in the last couple of Transformer films not to mention San Andreas and a few Roland Emmerich films I could mention) is not really character-driven. Yes, Superman and the Avengers had to do battle because it was the right or necessary thing, but the vast, cacophonous scale of the destruction was created by the filmmakers — by Zack Snyder and the Russo brothers because big-ass buildings toppling over and whole sections of cities being drowned or falling into huge earthquake pits and transformed into 9/11 ash heaps looks cool.

So Blake Lively doesn’t care…is that it? Surely she knows that starring in low-rent exploitation shite like The Shallows doesn’t enhance her stock value. She must be aware that the director, Jaume Collet-Serra, is a factory hack who has ground out horror flicks and Liam Neeson actioners in a way that is far, far below the level of, say, Roman Polanski. Surely she understands that a super-sized great white wouldn’t just nibble at her leg, and that sharks never leap out of the water like Orcas when feeding. Surely she understands that sharks don’t hunt for personal reasons (“I want you for lunch!”), and that they don’t commit to prolonged strategic vendettas. Pic is obviously dishonest, manipulative, jerry-rigged — no respect for reality. Give me a re-viewing of Open Water instead. 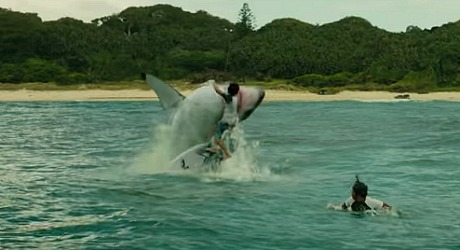