I was wondering this morning when I’d be hearing about screenings of John Lee Hancock‘s The Founder, which until today was slated to open on 8.5. Now The Weinstein Co. has bumped it to December. The drama about McDonald’s honcho Ray Kroc (played by Michael Keaton) is slated to open limited on 12.16 and wide on 1.20. That’s an award-season slot, of course, but I can’t quite accept it in that reagrd. I can’t erase the fact that the Weinsteiners were cool with August 5th for months and months. But I guess I can re-orient my thinking. (When the 8.5 date was announced Harvey Weinstein said that he hoped it would prove that “award-caliber movies [can] open any time of year and be successful.”) The Founder was originally slated to open 11.25.15.

One thing you’ll never see explored or even mentioned in any historical film is the level of hygiene available to the main characters. I realize that nobody wants to hear this stuff, but can I at least write one short article about it? We’re all so accustomed to living in total hygienic splendor (huge bathrooms, dynamic showers, soaps, deodorants, perfumes, facial cremes, hair gels) that we tend to forget or ignore how unclean and smelly things were in the old days, especially before the 19th Century.

It follows that historical films, none of which have ever been captured or projected with Aromarama-like technology, have never gotten into this. Until fairly recently (i.e., before intensely realistic pics like The New World and The Revenant) everyone in every historical film from whatever century has always been presented as looking relatively clean and well-groomed, and by inference agreeable smelling. But the fact is that most people stunk like animals in centuries past. 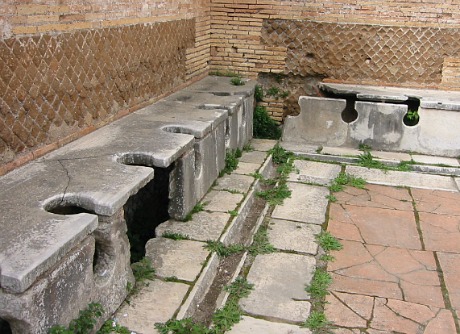 As I mentioned four years ago there wasn’t even a White House bathtub with hot running water until Abraham Lincoln’s first term. And when you’re talking about ancient Rome and especially Judea, which will be represented a few weeks hence in Timur Bekmambetov‘s Ben-Hur, forget it.

By our standards almost everyone except the wealthiest ancient Romans almost certainly had odor issues to varying degrees. The other day while sitting in an outdoor food court I noticed that a young guy sitting nearby (I’m not allowed to mention his ethnic heritage) smelled pretty gamey, and so I moved four or five tables away. If I was time-machined back to ancient Rome or Judea the stench would probably give me a heart attack.

A new Quinnipiac Poll has Donald Trump ahead of Hillary Clinton in Florida and Pennsylvania, which of course is all about the FBI saying she lied to some extent about the email thing. Maureen Dowd‘s latest N.Y. Times column summed up the general lament: “It says a lot about our relationship with Hillary Clinton that she seems well on her way to becoming Madam President because she’s not getting indicted. If she were still at the State Department, she could be getting fired for being, as the F.B.I. director told Congress, ‘extremely careless’ with top-secret information. Instead, she’s on a glide path to a big promotion. And that’s the corkscrew way things go with the Clintons, who are staying true to their reputation as the Tom and Daisy Buchanan of American politics. Their vast carelessness drags down everyone around them, but they persevere, and even thrive.” If on top of this she picks no-pizazz Tim Kaine as her vp, her stock will drop even lower. I personally will be crestfallen. Warren, Warren, Warren…for God’s sake, wake up.

Elizabeth Wood‘s White Girl (Film Rise/Netflix, 8.26) is one of those Sundance ’16 films that I was half-taken by but didn’t review because I didn’t feel strongly enough one way or the other. Set in New York City and “loosely” based on Wood’s own experience, the selling point is a kind of Larry Clark-like focus on hot sex scenes (rooftop and nightclub fucking, an office blowjob), drugs and danger. Leah (Morgan Saylor), a newly-arrived student, is portrayed as a naive and careless fuck bunny. The story is mainly about how her involvement with a drug-dealing Latino dude from Queens (Brian Marc) gradually leads to darker and darker intrigues after he’s busted and imprisoned. She tries to save him by selling a stash of cocaine, and then hiring a savvy attorney (Chris Noth, whom she has to eventually fuck, of course). But things are never that simple. A scary fat-fuck dealer (Adrian Martinez) wants his dope back but of course Leah has to play it sloppy and stupid. She stumbles from one Fellini Satyricon situation to another. Pic is well assembled as far as it goes, and props to Saylor for showing no restraint in playing a mentally challenged protagonist. But as I watched this in the Park City Library I was telling myself “this actually isn’t bad but it’s primarily exploitation…when it opens LexG will be there with bells on.”

A young boy (Lewis MacDougall) with a sick mom (Felicity Jones) gets to know a friendly tree giant whom no one else can see, at least not initially. The giant, of course, is a metaphor for the fervent imagination of a boy coping with grief and the cruel pestering of classmates. Will the audience that said “no” to The BFG say “yes” to A Monster Calls? At least the tree giant doesn’t resemble the creepy Mark Rylance.

Patrick Ness‘s 2011 novel is a respected fable about a kid’s internal life. The film’s just-released trailer suggests once again that a subtle approach hasn’t been chosen. Clearly aimed at the family idiot trade.

As I noted last April, A Monster Calls seems to lack the quiet spookiness of Guillermo del Toro‘s somewhat similar Pan’s Labyrinth, and seems a far cry from the the carefully layered, exquisitely underplayed The Orphanage (’07), which is Bayona’s masterpiece.

Will you listen to this scumbag? Christie, I mean. Trotting out Richard Nixon‘s 1968 message of “lawnorder” — ordinary, law-abiding citizens need to be kept safe from the unruly element within (read: Black Lives Matter) by a president who will not tolerate lawlessness in any form, from the powerful or the unpowerful. No mention of AR-15s or “no fly, no buy” — the main problem, he’s implying, are the troublemakers who may inspire another Micah Xavier Johnson to murder cops.

The first teaser for Damian Chazelle‘s La-La Land (Summit, 12.2) arrived this morning. A Los Angeles love story about a jazz pianist (Ryan Gosling) and an actress (Emma Stone) whose bond is tested by the usual pressures (ambition, hustling). It sounds as if Gosling can sing as well as I can when I’m imitating Mose Allison. Or as well as Ewan MacGregor sang in Moulin Rouge!.

The mood, thank God, is less Baz Lurhmann-y (cranked, glitzy) and more in the vein of Jean Negulesco‘s Daddy Long Legs. Not so much a tribute to classic ’50s musicals as a reimagining of that aesthetic, a fusion of then and now. I’m sensing that the dancing (none of which is shown here) will be kind of Fred Astaire-ish with a bluesy, slouchy ‘tude.

La-La Land‘s music — cool, jazzy, laid-back — is by Justin Hurwitz, who previously collaborated with Chazelle on Guy and Madeline on a Park Bench, which also did the “MGM musical with jazz influences” thing.

The feral public is going to have to be massaged and instructed before La-La Land opens in early December, the same way an emcee or comedian will warm up an audience before the headliner comes out. It will need film festival elitists to sing its praises for months on end, hence the debut at the Venice Film Festival and, I’m presuming, its likely appearance in Telluride, Toronto and New York.