Support on Patreon Follow @wellshwood
58 Comments
Clowns To The Left, Jokers To The Right

The mighty campaign of Hillary Clinton is going to barely squeak to a victory next Tuesday (Nate Silver says she has a 64% likelihood of winning vs. 36% for Donald Trump). But Florida is currently tipping in Trump’s favor, 52.9% to 47.1%, and so is North Carolina, 52.1% to 47.9% for Trump. N.Y. Times pollster Nate Cohn says the same thing — a close race but with Clinton slightly ahead. 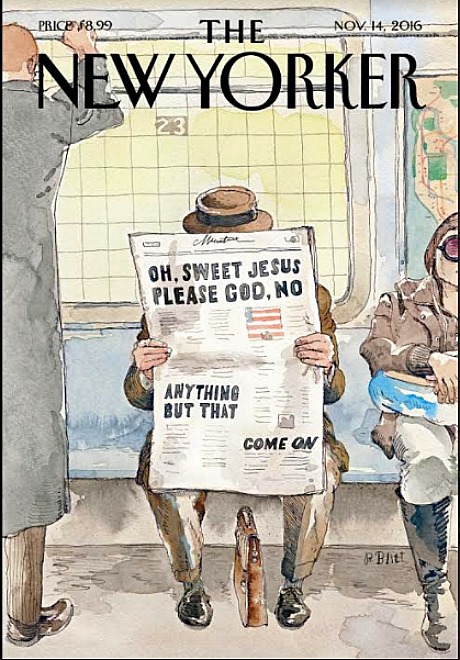 Over the last two or three days journos have received invites to almost every award-season film that hasn’t yet screened — Denzel Washington‘s Fences, Ben Affleck‘s Live by Night, Stephen Gaghan‘s Gold, Robert Zemeckis‘s Allied, Theodore Melfi‘s Hidden Figures, Taylor Hackford‘s The Comedian, Juan Antonio Bayona‘s A Monster Calls. (Invites to the Bayona actually came in a bit earlier.) All of these will be seen before 11.17, which is convenient given that Hollywood Elsewhere leaves that day for the Key West Film Festival. The only logistical hang-up is the closing-night screening of Peter Berg‘s Patriot’s Day — maybe CBS Films will allow some of us see it a little early. Right now the only December hold-outs are Martin Scorsese‘s Silence (which, I’m guessing, will probably screen right before Thanksgiving — 11.21 or 11.22), John Lee Hancock‘s The Founder and Morten Tyldum‘s Passengers. 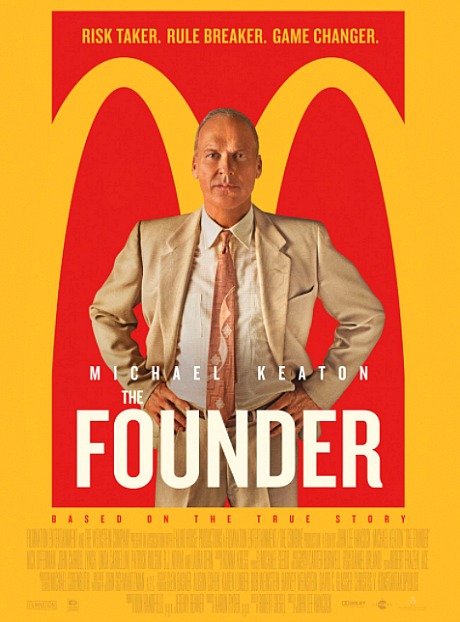 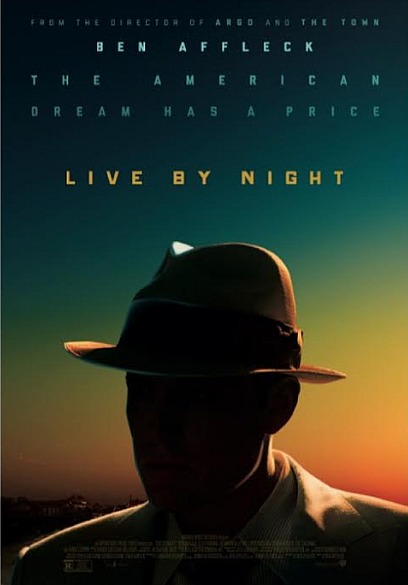 The Bleecker Street guys will soon host a couple of events (a party, a luncheon) for Matt Ross‘s Captain Fantastic, which everyone spoke highly of when it opened on 7.8.16. It premiered at the Sundance Film Festival on 1.23.16, was screened in the Un Certain Regard section at the 2016 Cannes Film Festival and then opened theatrically a few weeks later. I didn’t review it until late July:

“This is one of the most complex and provocative dramas about parenting and passed-along values that I’ve seen in a dog’s age. I didn’t love it, partly because it unfolds in such an exotic and woolly realm (I don’t hold with killing deer or living without deodorant or applications of Aqua Velva) and partly because the last 10 or 12 minutes seem more fanciful than grounded, but I admired it. I certainly found it intriguing. It warrrants a thumbs-up. 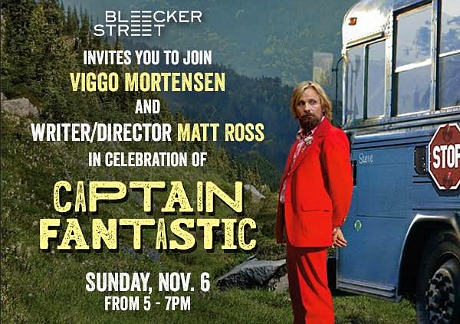 Billy Wilder‘s One, Two, Three (’61), one of my all-time favorite comfort films, has disappeared from Amazon streaming. Fans were never permitted to purchase a streaming copy — only rent one. But now that’s over. Which means, I presume, that a Bluray will hit the market sometime before long. But there’s no news of one. I love watching this 1961 film late at night, starting around 10:30 or 11 pm. Relaxing, soothing, like a glass of warm milk. 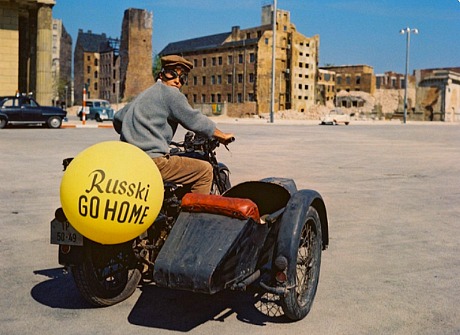 I don’t have issues with Christianity. I have issues with right-wing hinterland Christians, and particularly those who haven’t the backbone to oppose Donald Trump. The Romans may not have thrown Christians to the lions in ancient times (as famously depicted in Cecil B. DeMille‘s Sign of the Cross and Chester Erskine‘s Androcles and the Lion) and if they did do this it was terribly wrong. People should be free to worship freely, and having your throat torn open by a lion with bad breath is a ghastly way to die. That said, I understand why the Romans were so motivated.

I always liked Bill Simmons as a columnist, especially when he deigned to talk about movies and cultural matters. As a writer he has a relaxed guy vibe, a certain swagger and authority, but I never watched Any Given Wednesday more than once or twice because Simmons doesn’t exude that swagger thing on camera. My impression, in fact, was that his default thing was to be too much on the mild side. A grinning, laid-back, non-confrontational kiss-ass approach. Simmons is obviously a smart fellow but his voice is a little too high pitched. That on top of his slip-on sneakers (he should’ve worn cowboy boots or brown suede Bruno Maglis), those too-narrow shoulders, those flannel shirts and his glistening, close-cropped silver hair….later. One look at those grayish-blue eyes and you knew butter wouldn’t melt in his mouth. And now HBO has pulled the plug on Any Given Wednesday because of shitty ratings. The last episode will air on Wednesday, 11.9. 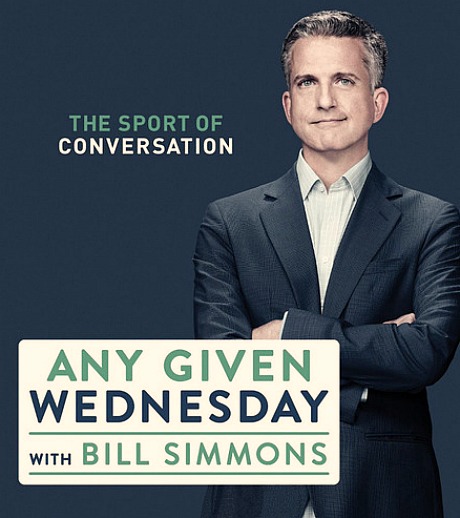 Spencer Ackerman‘s 11.3 Guardian story about the FBI having more or less become a pro-Trump rogue operation committed to sabotaging Hillary Clinton with misleading innuendo and bad smoke (“The FBI Is Trumpland”) was an eye-opener.

Hillary has one option when she takes office in January — all the bad FBI eggs have to be either fired or demoted and sent to regional offices in Bumblefuck territories. They’re finished. Tear off their stripes, break their sabres in two. And FBI director James Comey has to be axed also. 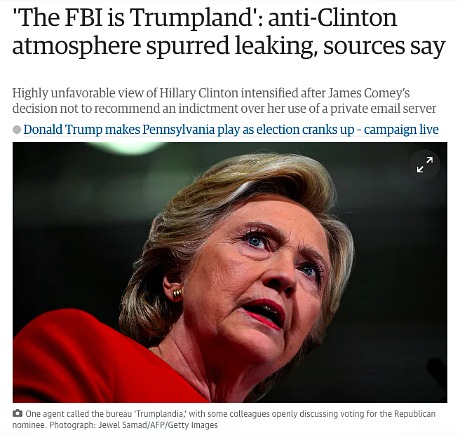 “Deep antipathy to Hillary Clinton exists within the FBI, multiple bureau sources have told the Guardian, spurring a rapid series of leaks damaging to her campaign just days before the election,” Ackerman’s story reads.

“Current and former FBI officials, none of whom were willing or cleared to speak on the record, have described a chaotic internal climate that resulted from outrage over director James Comey’s July decision not to recommend an indictment over Clinton’s maintenance of a private email server on which classified information transited.

“‘The FBI is Trumpland,’ said one current agent.

“This atmosphere raises major questions about how Comey and the bureau he is slated to run for the next seven years can work with Clinton should she win the White House.

“The currently serving FBI agent said Clinton is “the antichrist personified to a large swath of FBI personnel,” and that “the reason why they’re leaking is they’re pro-Trump.” The agent called the bureau ‘Trumplandia’ with some colleagues openly discussing voting for a GOP nominee who has garnered unprecedented condemnation from the party’s national security wing and who has pledged to jail Clinton if elected.” 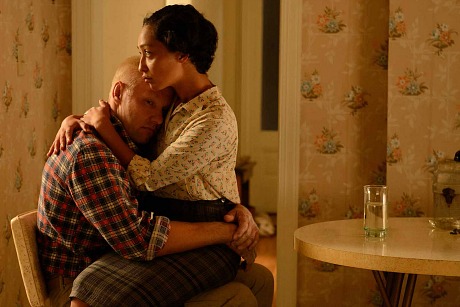 As opposed to offering glancing impressions or hors d’oeuvres-like samplings, this La La Land trailer (which I ignored yesterday) comes very close to compressing the full experience of this amazing, spirit-lifting, near-perfect film. I’ve seen it twice and I’m at least good for another two or three viewings before Oscar night. I still say that Manchester By The Sea is richer, heavier and more formidable, but La La Land got better the second time I saw it (at the Savannah Film Festival) and that means something. The only problem I have is that Ryan Gosling and Emma Stone‘s singing voices aren’t what they could or should be. But it’s not that much of a problem.