With Ezra Edelman‘s ESPN-produced, five-part O.J.: Made in America having recently won the 2016 Best Feature-Length Documentary Oscar, I’ve been thinking that Laurent Bouzereau and Mark Harris‘ Five Came Back, a three-part Netflix doc that has qualified itself with recent theatrical bookings, might become a major contender for the same prize next fall.

Then I read the following today (.4.7) on Movie City News, as reported by Ray Pride:

“The Academy’s Board of Governors approved Oscars® rules and campaign regulations for the 90th Academy Awards® at their most recent Board meeting on Tuesday, 3.28” — 10 days ago. The story continues: “In the Documentary categories, multi-part or limited series are not eligible for awards consideration. The Documentary Branch Executive Committee will resolve all questions of eligibility and rules.”

So unless I’m missing something that’s an over-and-out and “adios muchachos” for Five Came Back. Doesn’t seem fair or just, but that’s the Academy for you.

In Philippe Falardeau’s Chuck (called The Bleeder when it played in Toronto last September), star-producer Liev Schreiber portrays Chuck Wepner, a ’70s-era New Jersey prizefighter who served as the real-life inspiration behind Sylvester Stallone‘s Rocky. From a 9.2.16 review by Variety‘s Guy Lodge: “”Hitting many familiar, grainy beats, biopic actually picks up when it retires from the ring as it ditches the expected underdog arc for a compassionate anatomy of an all-purpose loser…Chuck overcomes its slightly put-on 1970s Joisey grit to become quite affecting, thanks in no small part to Schrieber’s self-punishing commitment.” Pic will open on 5.5. via IFC Films.

Belief in man-made climate change (i.e., adverse effects from industry and technology) began to acquire mainstream acceptance around the beginning of the Clinton administration. A bit more than three decades earlier two popcorn movies, Val Guest‘s The Day Earth Caught Fire (I just bought the British Bluray) and Irwin Allen‘s Voyage to the Bottom of the Sea, used scenarios about the warming and possible destruction of the planet as a central plot hook. Only barking rightwing loons are questioning climate change today. One of those loons is the President of the United States. Donald Trump was 15 years old and very impressionable when the above films came out. Did he not see either of these films with his friends? They were just the kind of thing that teenagers liked in those days.

I’m sorry, but for the last 25 or 30 years I’ve been unimpressed by the planet Jupiter. I loved the idea of the 2001 monolith aliens setting up camp on Jupiter, and I adored those green and purple oceans and red-yellow deserts that Dave Bowman sees as he comes in for a landing near the end. But when I learned sometime in the ’80s that the planet is almost entirely gas and possibly without any solid substances, I tuned out. Wikipedia definition: “Jupiter is primarily composed of hydrogen with a quarter of its mass being helium, though helium comprises only about a tenth of the number of molecules. It may also have a rocky core of heavier elements but, like the other giant planets, Jupiter lacks a well-defined solid surface.” What good is a planet if you can’t land on it? How can you even call it a planet when it’s just gas gas gas?

A month ago I reported that Zak, my three-year-old rag doll, has developed three tiny tumor-like growths on his back, head and rear leg. The Laurel Pet Hospital vet said he’d cut the mini-tumors off and do a biopsy. A 50% chance of cancer, he said, which would mean Zak would have a year or less. Or it might be something else. The assessment cost was $250. This morning I took Zak down for the removal + biopsy, and was told the fee will be $755. I’m sure that the treatment for whatever’s ailing Zak will cost an arm and a leg also. Whatever the situation, pet hospitals have you by the balls.

From “Death and Money“, posted on 6.26.11: “Zak #1, a Siamese born in ’86, died from pancreatic cancer at age 14 or 15. He stopped eating toward the end, prompting me to put Gerber’s baby food on his nose so he would at least lick it off. He was obviously finished. Any country vet would have taken one look and said, “Take him home and make him comfortable, and if you want to put him to sleep towards the end, we’ll do that for you. I’m sorry, but he hasn’t long to live.”

When I took Zak to TLC Animal Hospital in West Hollywood they managed to extract $600 or $700 for observation and stabilization fees before putting him to sleep. Caring shysters like TLC know full well that pet owners want to do something (i.e., spend something) when their pet is dying, and so they always step right up and show love and concern for your pet and offer consolation to the owner[s], and you’d better believe that they get that money. They’re trustworthy professionals, but they know how to vacuum your wallet.

A producer friend has passed along a Don Rickles story, told by a person who knew Rickles and Frank Sinatra:

“Rickles and Sinatra were playing different rooms at Caesar’s Palace in Las Vegas one weekend. [Back in the mid ’60s, I’m guessing.] Don caught up with Frank before he went on one night and said, ‘Listen Frank, I’ll be in the audience tonight. I’m bringing a gorgeous girl and it’s a first date and you know I’d really like to impress her.’ Frank said, ‘Sure Don, how can I help?’ Rickles said, ‘Can you come over to the table after the show and say hello and be real friendly? She’ll be really impressed.’ Frank said, ‘Sure, no problem.’

“After the show, Frank made his way over to Rickles’ table and there he was with the girl. Sinatra grins and says, ‘Hey Don! How ya doin?’ Rickles looks up and says, ‘I can’t talk now, Frank…I’m busy.'”

I’ve been doing breakfasts, lunches and business meetings at WeHo’s Le Pain Quotidien (8607 Melrose) for 15 years. I worship the place — fine coffees and breads, healthy dishes, plain-wood interiors, soothing vibes, front porch. Two days ago my heart nearly stopped when I noticed a “for lease” sign. Le Pain Quotidien, the nearby Urth Caffe and another little restaurant across from the Blue Whale are the only people-friendly businesses left in the local area– all the others sell over-priced clothing, furniture, rugs and home furnishings. My Melrose-strip neighborhood (west of La Cienega, east of San Vicente) has become more and more corporate-vibey over the last five to seven years, and less and less human. 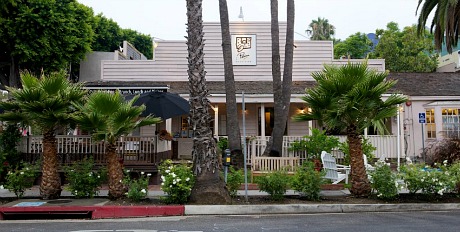 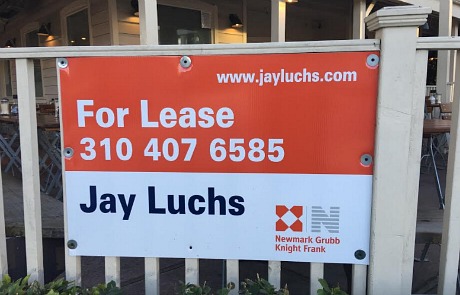 I naturally assumed that with all the new businesses and high-end construction that the local landlord is squeezing Le Pain Quotidien for more rent, and that the Belgian-based owners are saying “fuck that.” My assumption was correct. The details are on the website of Jay Luchs, an exec vp with Newmark Grubb Knight Frank, the worldwide real-estate empire, but to be sure I called his office. I was told that Luchs has increased the monthly rent to $34K. (The per-square-foot charge is $16.50 per month.) The Melrose shop had a 15-year lease beginning in ’02. That lease has expired. The restaurant is now paying on a month-to-month basis.