The once-great John Avildsen has departed this realm at age 81. Hugs, regrets & condolences to family, friends, fans. Avildsen’s peak achievement years happened in the early to mid ’70s — Joe (’70), Save The Tiger (’73) and the original Rocky (’76). That was his glory period, tapping into the zeitgeist, as good as it got.

Joe was his rawest and most explosive — a low-budgeter that caught the hardhat vs. hippies thing at exactly the right moment. I re-watched Rocky in high-def last year and found it even better than I’d remembered. Save The Tiger probably hasn’t aged as well but it has its moments. Avildsen directed three others that were at least decent — The Formula (’80), Neighbors (’81) and Lean On Me (’89).

Very few directors can point to a respectable roster of grade-A films made over two decades; fewer still can say “I made three…okay, two that really rocked the culture.” Avildsen can say that.

I relate a lot more to Mark Wahlberg and Mel Gibson‘s characters than I do to Will Ferrell and John Lithgow‘s. Because the former are real, studly, straight-talking guys and the latter are overly sensitive p.c. candy-asses with shrivelled appendages. That’s the intended response when you watch this, of course. And you’re not meant to be bothered by the fact that in real life Wahlberg and Gibson are right-wingers. If I didn’t know better I’d say that Daddy’s Home 2 is Republican propaganda.

It feels icky to post Alex Jones‘ recordings of his pre-interview conversation[s] with NBC’s Megyn Kelly, during which they discussed the tone and perimeters of their then-forthcoming sitdown. Jones says he told Kelly in the interview that he believes that the Sandy Hook massacre “probably happened.” He actually says this — that the massacre of all those little kids probably fucking happened. Then again it might not have since “probably” suggests that not all the facts are in.

From 6.13.17 Media Matters post containing links to what Alex Jones has actually said about the Sandy Hook massacre:

“While we don’t know how the Sandy Hook exchange will play out in Jones’ full interview with Megyn Kelly, what can be proved is that Jones is a liar who has attempted to sanitize his definitive past claims that the shooting was a ‘hoax.’

In 2013, Jones called the shooting “staged” and said “It’s got inside job written all over it.”

In March 2014, Jones said, “I’ve looked at it and undoubtedly there’s a cover-up, there’s actors, they’re manipulating, they’ve been caught lying, and they were pre-planning before it and rolled out with it.”

The only thing wrong with this classic scene from The Best Years Of Our Lives, arguably the most haunting ever shot by director William Wyler, is the absurd amount of dust inside the plane fuselage. The scene is happening only a year after the end of World War II in Europe (i.e., April 1945) and perhaps a little less, and yet to judge by the dust levels the plane could have been sitting in the middle of a Sonoran dust storm for at least a decade if not longer. Wyler strove to make this 1946 homecoming film to be as accurate as possible, and he certainly managed that in dozens if not hundreds of little ways. But not in this instance.

21 Comments
Get Your Facts, Chronology Straight

Using Ellen DeGeneres’ 2014 Oscar group-selfie as a template, some dilletante named Nikston has posted a sloppy-assed imagining of what a 1955 Oscar selfie would look like. The main problem is James Dean vs. Elvis Presley. Did Elvis ever attend an Oscar ceremony? If he did it would have been in March 1957 (Love Me Tender had opened four or five months earlier) but Dean died in September ’55, so this shot had to have been taken in March ’55. Which is when Presley’s singing career was just starting to happen, locally but not yet nationally, and a year before he was even screen-tested. Fake…doesn’t add up! And why is Montgomery Clift‘s head so small? (He looks like a puppet.) I understand Lena Horne being part of the gang but who’s the other female artist of color? Oh, right — Dorothy Dandridge. 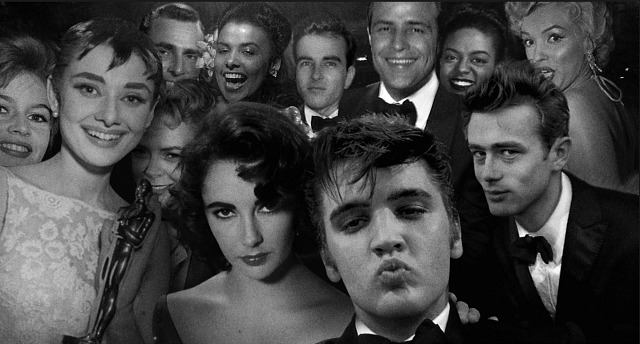 The first peek-out screening of the completed War For The Planet of the Apes (20th Century Fox, 7.14) happened last night on the Fox lot. Mainly for elite first-wave journos. Director Matt Reeves and producer Dylan Clark were the only team members at the after-party. Everyone else is in London, where the junket will happen because costar Woody Harrelson is shooting the Han Solo film there. 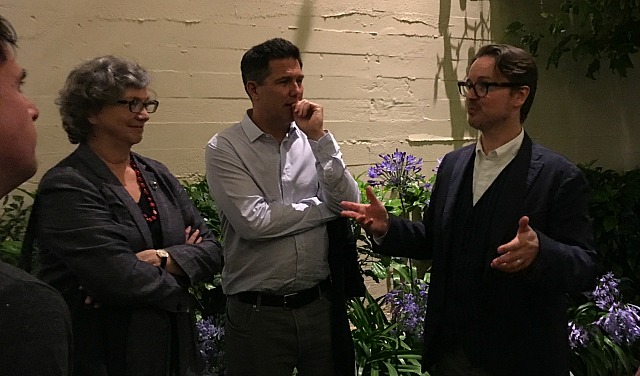 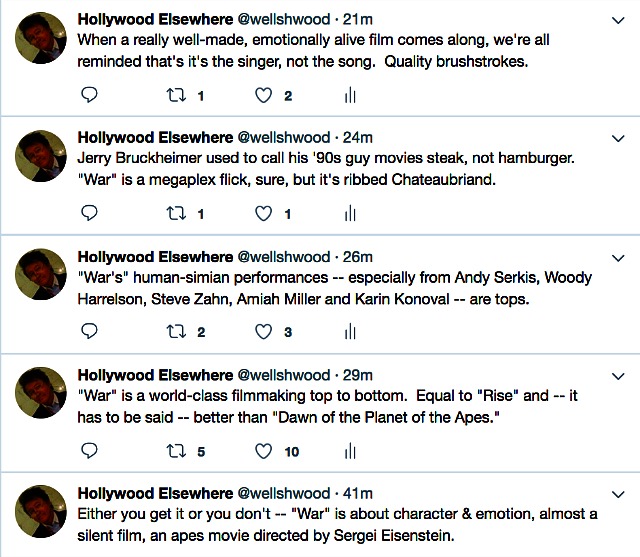 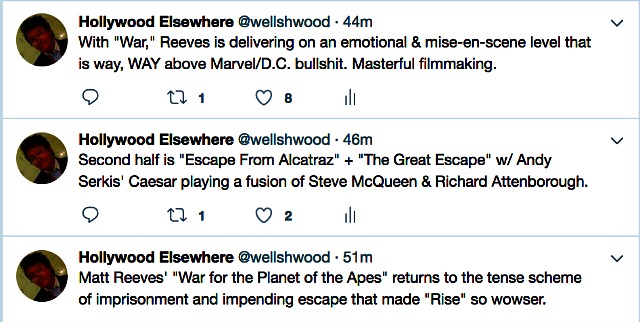