Two contenders that I didn’t care for — Angelina Jolie‘s First They Killed My Father (Cambodia) and Robin Campillo‘s BPM: Beats Per Minute (France) — didn’t make the cut. (Here are my negative responses to the Jolie and the Campillo.) 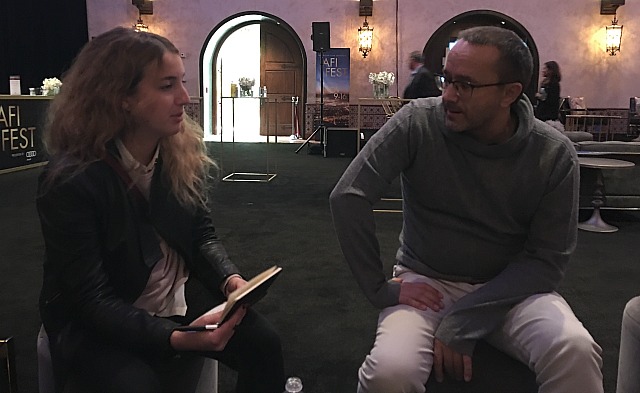 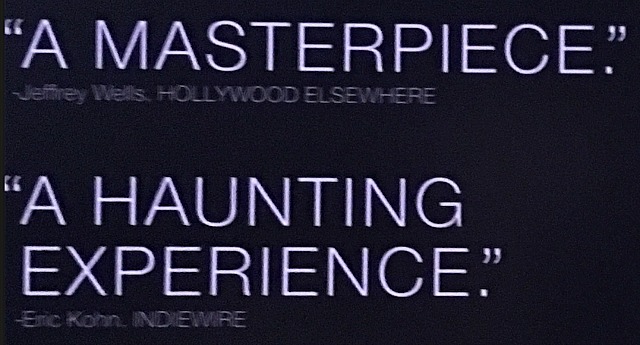 I’ve disliked the idea of Gary Ross‘s Ocean’s 8 (Warner Bros., 6.8.18) from the get-go, and I mean intensely. George Clooney‘s Danny Ocean has an “estranged” sister named Debbie (Sandra Bullock) and so, being competitive and all, she’s decided to mastermind her own audacious heist, only this time with the assistance of seven lady thieves (Cate Blanchett, Helena Bonham Carter, Anne Hathaway, Rihanna, Mindy Kaling, Sarah Paulson, Awkwafina) with the usual eccentric character traits. The plan is to rip off something of value (presumably not cash) from Debbie’s ex-boyfriend (Damian Lewis) on the night of Manhattan’s annual Met Gala. Original Ocean’s trilogy costars Matt Damon and Carl Reiner perform cameos but not Clooney. The idiotic brother-sister thing is like Steven Soderbergh deciding to make Clooney’s character the son of Frank Sinatra‘s Danny Ocean, Sr., who masterminded the 1960 Las Vegas casino heist. Something about the poster…hell, the whole enterprise is whispering “caveat emptor.” 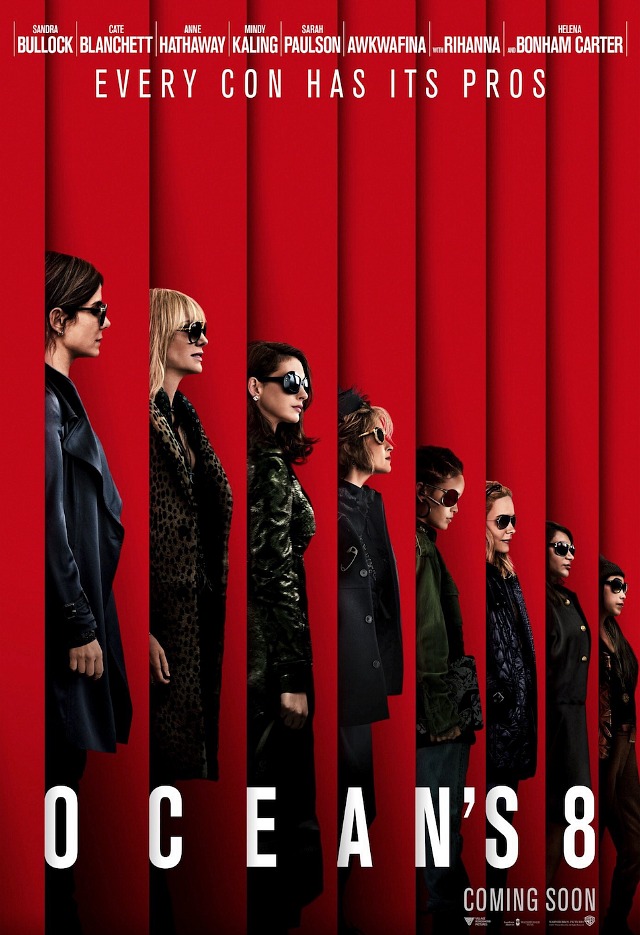 Director Richard Thorpe is primarily known as “the guy who didn’t get it.” Reason #1 was because Thorpe was fired off The Wizard of Oz after two weeks of shooting, one reason being dissatisfaction over his decision to dress Judy Garland in a glossy blonde wig, which made “Dorothy Gale” look inappropriately older and even sexy. Reason #2 was Thorpe’s direction of this scene from Jailhouse Rock. For some odd reason Thorpe decided to allow a homely guy (heavy horn-rimmed glasses, Brylcream hair) stand next to Judy Tyler as Elvis Presley sang “Treat Me Nice”. Look at him clapping along. What was Thorpe thinking? Directing is about visual composition as well as guiding actors, and Thorpe nearly destroyed this scene by allowing “four eyes” to seriously distract. 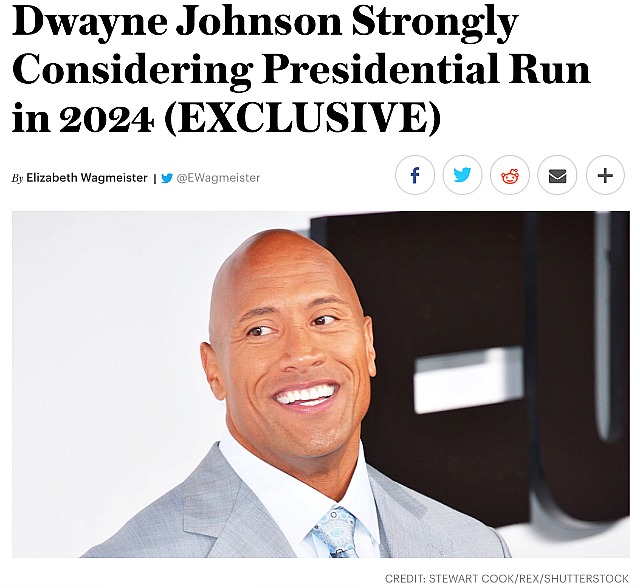 A couple of hours ago the Federal Communications Commission voted 3-2 to kill net neutrality. Yes, this has actually happened. The internet was more or less a level-playing field in the ’90s and during the Dubya and Obama administrations. That’s over now — it’s no longer considered a utility like water or electricity, the big guys are running the shots, and bit by bit consumers are going to have to adapt to increasing effects of corporate authoritarianism.

It won’t happen overnight, but things are gradually going to become more and more benignly Orwellian and less open-rangey. The Obama-era regulations that prohibited broadband providers from blocking websites or offering preferential treatment to bucks-up interests are history. The rules that until today stood against the all-but-complete corporate takeover of online content and to some extent discourse have been tossed.

In a 11.29.17 N.Y. Times piece, columnist Farhad Manjoo wrote that “when the rules go, the internet will still work, but it will look like and feel like something else altogether — a network in which business development deals, rather than innovation, determine what you experience, a network that feels much more like cable TV than the technological Wild West that gave you Napster and Netflix.”

FCC chairman and Trump lackey Ajit Pai said killing net neutrality “would gradually help consumers because broadband providers like AT&T and Comcast could offer people a wider variety of service options,” according to a 12.14 N.Y. Times piece by Cecilia Kang. “We are helping consumers and promoting competition,” Pai said in a speech before the vote. “Broadband providers will have more incentive to build networks, especially to underserved areas.”

Killing net neutrality is essentially about allowing corporate forces to make more money and, if they choose, to selectively discourage or suppress certain forms of content or discourse. This is a huge, huge deal, and most U.S. citizens are still saying, “Uhm, what exactly does net neutrality mean again?”

Dominic Eardley: “So with the Disney swallowing of Fox, I guess we’re all in store for even more bland industrial hamburger patties posing as cinema?” HE: “Yup. Andre Malraux, ‘Man’s Fate.'”

It’s certainly not a burn. Not by my yardstick. Not if you accept and understand that a 40 year-old franchise can’t really go home again. Engages, strives, tries like hell. Draws a bead, hits the mark often enough. Aimed at families, sure, but in a way that doesn’t strenuously alienate. A diligent, crafty, resourceful attempt to wow fanboy dads who were 13 when The Empire Strikes Back opened in ‘80. Sticks to formula expectations as far as it can without seeming overly desperate. Plays the game like a spirited opportunist. A visual tribute to Empire‘s noirish lighting scheme. Perhaps a tad too jokey here and there. Tries your patience to a certain extent, okay, but whaddaya expect? A well-worn franchise is being re-milked, re-baked, re-fried, re-seasoned and vigorously stirred in order to turn a profit. A good looking-to-future-generations ending. Rian Johnson is an honorable tactician, an architect with a plan, an above-average engineer, a good fellow. 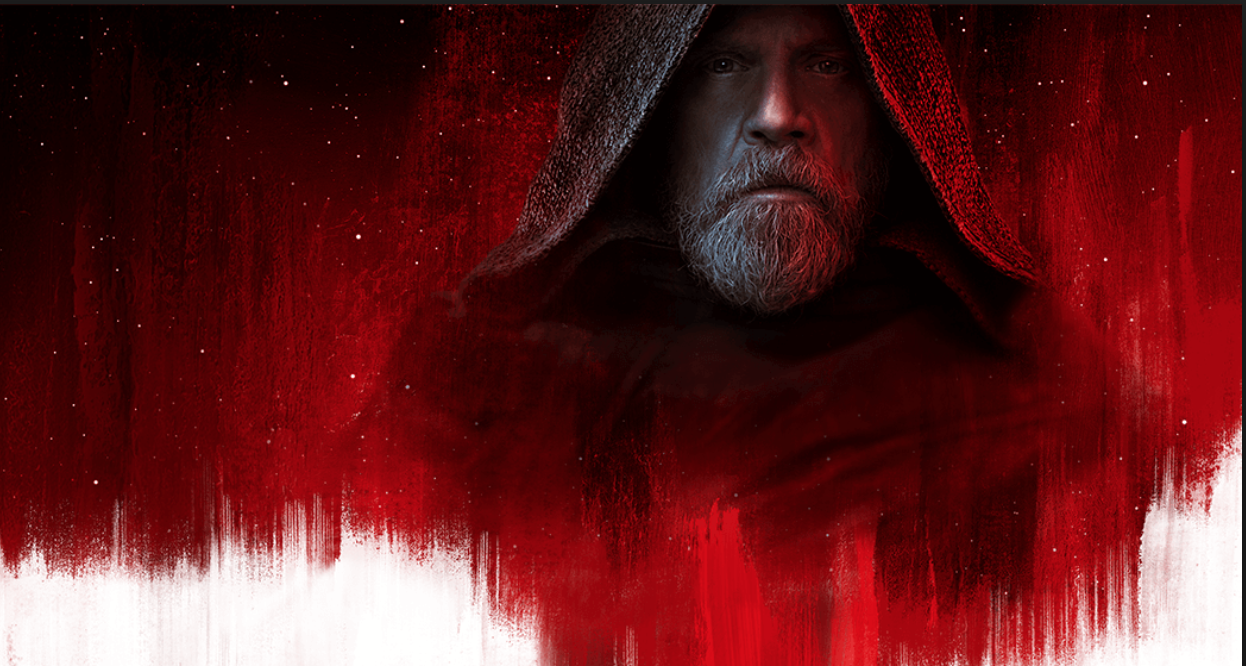