Thank God we have TMZ and Indiewire to slap Seth Rogen and Evan Goldberg around when they step out of line on blackface matters and whatnot.

Last night Rogen apologized for the use of blackface on the set of the upcoming comedy Good Boys, which Rogen and Goldberg are producing. The brouhaha started after set photos showed a stand-in for 11-year-old Keith L. Williams wearing makeup to darken his skin color.

“I should start by saying this shouldn’t have happened, and I’m terribly sorry it did,” Rogen said. “I won’t give excuses for why it happened. I’ll just say that as soon I was made aware of it, I ensured we put an end to it — and I give my word that on any project my team and I are involved in, we will take every precaution to make sure something similar does not take place again.”

Both the stand-in and Williams are African-American.

Good Universe, the production company behind Good Boys, told TMZ that the makeup was used to match the stand-in’s lighter skin tone, and that it’s “not uncommon for lighting purposes to match actors’ skin tones.” They used make-up on a stand-in, in other words, to make his skin color match the lead actor’s. It was nothing that would be filmed or used in the film — it was just for reference.

Indiewire‘s Zack Sharf asked three cinematographers about the incident, and were told that the practice of blackface for the sake of darkening shadow was “unorthodox.” How glad are we that Indiewire stepped in before this thing got out of hand…right? Indiewire has a sworn duty, after all, to police filmmakers and how they make their films. We should thank this intrepid news site for having the moxie to step into this situation and straighten these bitches out.

James Caan‘s facial expression between the 17- and 21-second mark tells you a lot about who John Wayne was. “Gimme that look you give me,” etc. Twelve-year-old kids, seeing who could screw up who, etc.

I tried to watch El Dorado once and I couldn’t stay with it. Feels lazy, phony. Everyone looks and behaves like actors saying lines, and all the supporting players and extras are dressed like they just came out of Nudie’s. Hawks phoned this one in. One of two remakes of his own Rio Bravo, the other being Rio Lobo. I respect Rio Bravo but have never believed it. No one ever has. Jean-Luc Godard gave carte blanche praise to Rio Bravo way back when, and he’s never answered for that. I’m more of a High Noon type of guy.

The trailer for Forever, an original Amazon series from Parks and Recreation collaborators Alan Yang and Matt Hubbard, is obviously inspired by David Lynch‘s Blue Velvet — i.e., suggestions of soul-stifling boredom and perversity lying beneath the banality. Eight half-hour episodes or something close to three and half hours all told. Maya Rudolph and Fred Armisen‘s marriage encounters darkness and depravity on a ski trip. Costarring Catherine Keener (Get Out), Noah Robbins (Unbreakable Kimmy Schmidt), and Kym Whitley (Master of None). Premiering on Friday, 9.14.

I’m much better at bitching about things that don’t work than fixing them. I can paint walls, build wooden shelves, screw in metal-bridge stabilizers or hang framed photos, but I’m not a typical handy type. Certainly not if the repair involves reading instructions. I’d much rather scoff and complain.

Today’s pain in the ass is my bathroom shower-stall knob, which sometimes operates on a 20- or 30-second delay principle and sometimes not at all. When I start the shower I always turn it to 9 o’clock, knowing it’ll take a while for the hot water to be gush through. When it finally manifests it eventually turns scalding, of course, at which point I have turn the knob back to the 11 or 12 o’clock position, which is supposed to deliver temps that are moderately warm but tolerable. Except the water stays hot. So I turn the knob to 1 pm…still scalding. 2 pm…same. So I turn it to 3 pm and the water loses all semblance of warmth. The term is actually “half-cold.” So I turn it back to 11 pm — still chilly. 10 pm, no difference. I turn it back to 9 pm and it’s steaming hot again and I’m dealing with third-degree skin burns.

I’ve done some research and there’s a syndrome that plumbers called TAD, or Temperature Adjustment Deficiency. That’s what I have, and this is one more reason why I sometimes hate my life. 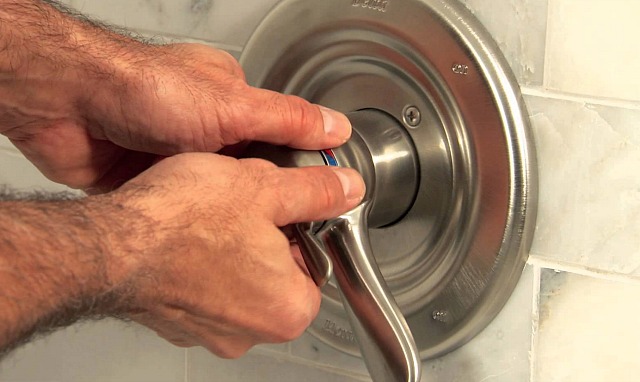 Cleaning rain gutters is one of the most miserable chores I’ve ever had to do, especially if you live in the Northeast and you’re scooping out that sickening, ice-cold mush on a windy, freeezing day any time between late November and mid-April. While standing on an extension or step ladder, of course, with your cheeks turning red from the cold and your teeth chattering as you mutter profanities and generally curse God, the earth, your life, your father (the ogre who made you do this) and definitely the trees for dumping their leaves in the first place. And of course, you always have peel back the frozen chicken-wire mesh that’s been attached to the gutters to keep the leaves out, which is to say “not really.” You also have to dump the frozen glop into a bucket or plastic garbage bag, which means you have to climb down and dump the contents into a trash can every five or ten minutes. The only way your hands can stand the cold is to wear two sets of gloves — plastic dishwashing gloves covered by winter or all-weather work gloves. I’m getting angry all over again just thinking about this. This was my life in my mid teens. Awful. 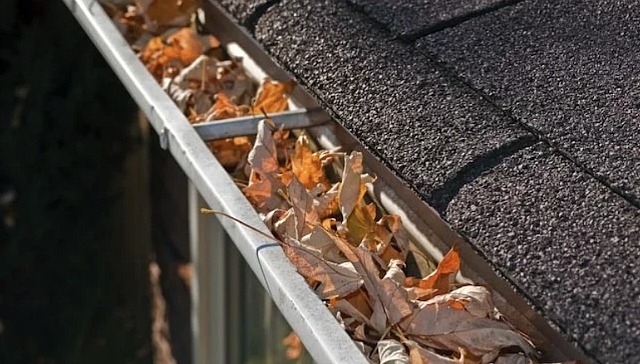 Craig William Macneill’s Lizzie (Saban/Roadside, 9.14) “features two protagonists, the title character (Chloe Sevigny), daughter of Fall River, Massachusetts’s wealthiest family, and the Irish maid, Bridget Sullivan (Kristen Stewart), the only person known to be at home (besides the victims) at the time of the August 1892 murders.

“Bridget was always a key figure in the Borden saga. She almost certainly lied about Lizzie’s comings and goings, and her hasty departure for points unknown (possibly Ireland) the day after the murders was odd, to say the least. (There was no indication that she was about to lose her cleaning job –— I can think of at least two rooms in the house that needed a good scrubbing.) But Lizzie puts Bridget at the center of the action, where an ax-blow to the head signals a blow against sexual assault and patriarchal oppression.” — from David Edelstein’s Vulture review, posted on 1.22.18.

“I spent most of the running time waiting for Lizzie to grab the hatchet and wrap things up already.” — from Sara Stewart‘s N.Y. Post review, posed on 1.30.18.

Pic has a Rotten Tomatoes rating of 70%…not too bad, has some merit, etc.

QAnon are followers of “Q,” an anonymous person or group of morons who claim to be privy to government secrets. The Q theology is “a stew of various but connecting conspiracy theories that generally hold President Trump as a conquistador battling a cabal of anti-American saboteurs who have taken over government, industry, media and various other institutions of public life in a plan to…well, the overarching goals of the nefarious actors are not clear.

“The supposedly classified Q information has been revealed on the 4chan and 8chan message boards and spread around mainstream internet platforms like YouTube, Facebook and Twitter. Q has attracted people — the exact number is hard to know — eager to consume his ‘bread crumbs,’ or new details in a sprawling web of conspiracy theories.

“Q claims to be a government insider exposing an entrenched, international bureaucracy that is secretly plotting all sorts of nefarious schemes against the Trump administration and its supporters. The character uses lingo that implies that he or she has a military or intelligence background.” — from “What Is QAnon: Explaining the Internet Conspiracy Theory That Showed Up at a Trump Rally,” posted in the N.Y. Times on 8.1.18.

The London Film Festival has selected Jon Baird and Jeff Pope‘s Stan & Ollie as a closing-night attraction…fine. But that photo of John C. Reilly and Steve Coogan posing in classic L & H garb is at least partly misleading. It suggests that the film is about the comedy duo in their early to late ’30s heyday (Pardon Us, Bonnie Scotland, Our Relations) when in fact the film is about a last hurrah tour of England and Ireland in 1953, when they were in their early 60s.

The Stan & Ollie premiere will happen on 10.21. Entertainment One (eOne) will present simultaneous preview screenings at cinemas across the UK. The film will open wide on 1.11.19. No U.S. bookings or film festivals? How about a Netflix or Amazon deal? A closing-night slot at any festival is always worrisome, but especially so at the London Film Festival. 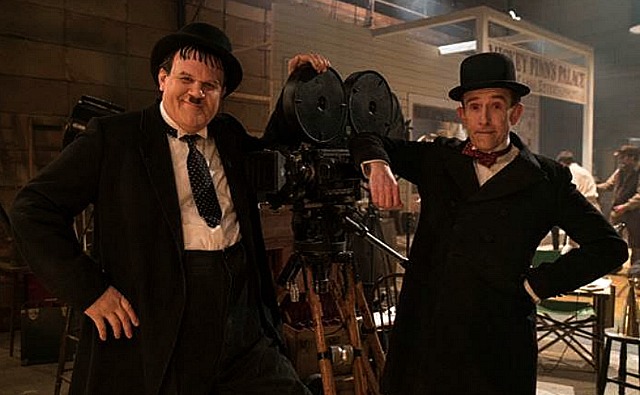 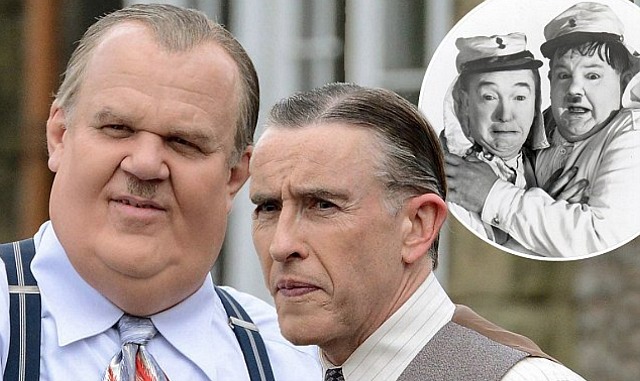 Reilly and Coogan as the comic duo during their 1953 farewell British Isles tour.

Boilerplate: “Developed by BBC Films, the film is set in the twilight of Laurel and Hardy’s careers, and will focus on their farewell tour of Britain’s variety halls in 1953.

“Their shtick — Stan the wide-eyed ingénue, Ollie the pompous fool, their meticulously rehearsed physical routines and their charming musical numbers — had made them superstars all over Europe, South America and beyond. However, a split from their controlling mentor (i.e., Hal Roach), the vagaries of studio politics and a run of poorly received films had resulted in their star falling. A series of acrimonious divorces, alimony battles and Oliver Hardy’s failing health didn’t help.

“The British tour was supposed to relieve some of the gloom and, despite numerous glitches, the public loved them. Audiences grew and grew as word spread that Laurel and Hardy were back and as funny as ever. As audiences swelled, so did morale. But as their careers and friendship blossomed, disaster struck as Ollie suffered a heart attack. He tried to carry on performing on the tour, but it became clear that he was too ill. Replacement performers were found to fill in but, without Stan and Ollie’s charm and warmth, the shows simply weren’t the same.

“Stan was offered the chance to perform alone, but refused. He realized that neither worked without the other, that they were so much more together than they were apart. Appreciating the sacrifice made by his friend, Ollie roused himself from his sickbed for a few last, triumphant performances, the very last of their extraordinary career.”