“Buster Keaton was tragic, shattered, a survivor in name only and a genius — he was company for Bresson, Ophuls.

“And it was in the 1920s that Keaton hit his great purple passage: The Three Ages; Our Hospitality; Sherlock Jr; The Navigator; Seven Chances; Battling Butler; The General; College; Steamboat Bill Jr; The Cameraman. In those years, Chaplin made The Gold Rush and The Circus, two fabulous hits. [But] Keaton worked at a more rapid pace, and he made one thing — masterpieces.

“These are the films that any newcomer needs to see. And in that process he or she should realize that the experience is not only comic — it has to do with space, light, movement, duration, time. It is great theatre, but it is music and form, too. These are among the most beautiful films ever made in the silent era.” — from David Thomson‘s 1.29.06 Independent essay, titled “Buster Was Stoked By Genius, But He Hit The Buffers Hard.”

If there’s one ironclad rule that pretty much every Hollywood-employed director has to follow, especially those working in the fantasy, urban thriller or action-adventure genres, it’s that you have to grab the ADD crowd before their concentration ebbs and they switch the channel.

Which is why almost every film starts with a grabber scene — some jarring activity that seizes the idiots by the lapels and says “wait, hold on, stick around…we know you’re looking for an excuse to watch something else so here’s a little stimulation for your inner 12 year-old.”

Example: Even The Post, an upmarket film about an epic chapter in 20th Century journalism that was aimed at educated GenX-boomers, started with a combat scene in Vietnam (i.e., RAND corporation egghead Daniel Ellsberg embedded with an infantry unit and carrying an M16) with the enemy engaged and tracer bullets flying every which way.

Deadline Mike Fleming reported earlier today that Mel Gibson will co-write and direct a remake of Sam Peckinpah‘s The Wild Bunch for Warner Bros. It hasn’t been stated one way or the other if Gibson’s Bunch will be a straight remake or something else, but one of the paramount Hollywood rules is that you don’t remake a universally admired classic film — you remake a film that wasn’t so good in the first place but which your remake can improve upon.

What could possibly be gained by remaking The Wild Bunch? I know — there are tens of millions of idiots out there who can’t be bothered to stream the original but who would pay to see Gibson’s version, etc. What’s Gibson going to do, make it bloodier? Is he going to find middle-aged actors who can out-point the original performances by William Holden, Robert Ryan, Warren Oates, Ernest Borgnine, etc.?

Legendary Star Wars and The Empire Strikes Back producer Gary Kurtz has passed from cancer at age 78. Condolences to friends, family, fans and colleagues. He was a realist, a great fellow, a true creative and a straight-shooter.

I was lucky enough to have met and interviewed Kurtz once, about 19 or 20 years ago. It was actually a tag-team interview with Film Threat‘s Chris Gore. It happened in a lobby of some Burbank office building. Kurtz had become one of my heroes after I read his disparaging comments about grand poobah George Lucas, whom he parted company with sometime after the release of Empire and before principal photography began on Return of the Jedi. Kurtz repeated these observations and more during our chat.

Wiki excerpt: “Kurtz claimed that after Raiders of the Lost Ark in 1981, Lucas became convinced that audiences no longer cared about the story and were simply there for thrills and entertainment, and began to deviate from the originally planned plotlines for Return of the Jedi, at which point Kurtz quit the series.

“Kurtz has also claimed that Lucas changed the emphasis from storytelling to prioritizing toy merchandising. In a 2010 interview for the L.A. Times, Kurtz revealed that he had become disillusioned with what he saw as the commercially-driven direction the franchise was taking, as well as the related changes that Lucas made to the plot of the third movie, which was originally much darker, and supposedly included the death of Han Solo.

“‘I could see where things were headed,’ Kurtz said. ‘The toy business began to drive the empire. It’s a shame. They make three times as much on toys as they do on films. It’s natural to make decisions that protect the toy business but that’s not the best thing for making quality films.'”

“As all true Star Wars fans know, Jedi was a kind of tragedy as it strongly indicated to anyone who was halfway hip that Star Wars creator and Jedi producer George Lucas had sadly evolved into a shameless hack and that the Star Wars series was effectively over and would never again deliver the power, gravitas and coolness of The Empire Strikes Back.

When I went into a film just before 2 pm eastern, the news was that Deputy Attorney General Rod Rosenstein had verbally resigned to White House Chief of Staff John Kelly. When the screening ended just after 4 pm the update was that any talk of departure was on hold until Rosenstein and President Trump meet on Thursday.

The prevailing theory is that the Rosenstein thing is basically a diversion — Trump-generated smoke to take everyone’s mind off of Brett Kavanaugh‘s early ’80s shenanigans. God, what an unruly mess.

N.Y. Times excerpt: “It is not known whether Trump might use the new turmoil at the Justice Department to fire Attorney General Jeff Sessions, a onetime political ally who became the No. 1 target of Trump’s fury when Sessions recused himself from overseeing the Russia investigation.

“Rosenstein’s departure would end what had been an often toxic relationship between Rosenstein and the president that at numerous times left Washington on edge about the potentially drastic consequences for the country if Mr. Trump terminated the deputy attorney general.

“In a Twitter rant in April about what he called the ‘Fake & Corrupt Russia Investigation,’ Trump accused Rosenstein of being one of the most conflicted members of the Justice Department, asserting that the deputy attorney general was among those who were seeking evidence of a Trump-led conspiracy.” 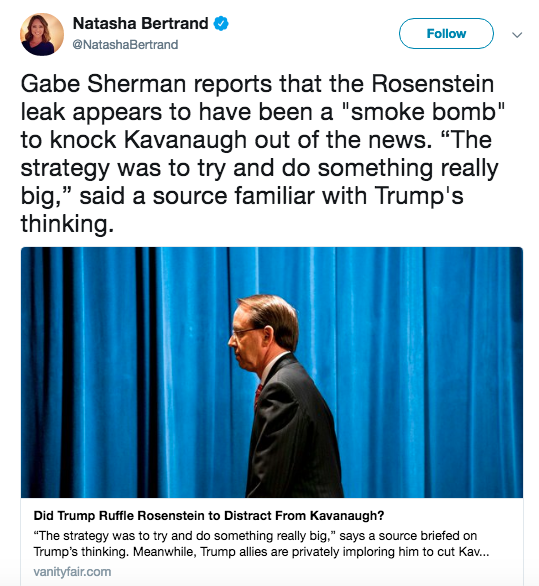 Following last night’s publication of Ronan Farrow and Jane Mayer’s New Yorker piece about Deborah Ramirez‘s allegation about Brett Kavanaugh, a journalist wrote me the following: “Tonight might be a good time to remind people that after all these years, a second Woody Allen accuser has not come forward.”

I have an idea I’m going to enjoy Morgan Neville‘s They’ll Love Me When I’m Dead a lot more than Orson Welles‘ The Other Side of the Wind, which I had problems with. Just a feeling. I’ll be seeing it later this week. 98 minutes is a very good length for almost anything.

I saw The Front Runner (Columbia, 11.6) again last night. So well-ordered, smartly written, real-deal…a fastball you have to swing on.

Gary Hart, the would-be Democratic nominee for President in the spring of ’87 whose candidacy was destroyed by the press over a relatively harmless instance of marital infidelity, is so well nailed by Hugh Jackman. In fact the whole cast delivers — Vera Farmiga as Lee Hart, J. K. Simmons as Bill Dixon, Alfred Molina as Ben Bradlee, Sara Paxton as Donna Rice and particularly Mamoudou Athie as A.J. Parker, a diligent Washington Post reporter who covers the Hart campaign.

The Front Runner is about the fall of a flawed but basically decent fellow who was actually rather high-minded when it came to the separation between public and private life. It ends, for sure, on a note of resignation and solemnity. A good man is taken down because there is no private life for a political person and the cameras are everywhere. But 60 seconds after the film ended I was reading about the second sexual misconduct allegation against Brett Kavanaugh, and going “yes!…yes!”

The main difference, of course, is that Hart was merely busted for catting around (i.e., using his power and celebrity to score) while Kavanaugh is being drilled for having twice acted in an abusive and contemptible way with young women while drunk.

(Last night an additional Kavanaugh allegation came from Stormy Daniels attorney Michael Avenatti, who wrote that he is “aware of significant evidence” that Kavanaugh participated in multiple gang rapes while in high school.”)

I love Reitman’s decision to play it chaste in a scene between Jackman and an unseen Paxton aboard the Monkey Business, showing only Jackman as he smiles and flirts. Throughout The Front Runner the viewer is kept at arm’s length, and is never shown anything the least bit titillating. I naturally assumed that the famous color snap of Hart and Rice (with Rice sitting on his lap) would be seen at some point, but it never appears, primarily because the film ends right after Hart collapses his candidacy, and the photo didn’t surface until a week or two later.

I took Jett and Cait to last night’s screening. They’re both around 30, and until last night had never heard of Gary Hart and his campaign calamity.

This morning I participated in a Front Runner breakfast schmoozer at the Crosby Street hotel. Reitman, Jackman, Simmons, Paxton and Athie attended.