In the forthcoming Long Shot, Charlize Theron plays a 40ish Secretary of State planning a run for the White House, and Seth Rogen plays a political journalist whom Theron hires to be her speechwriter, in part because she babysat him when she was in her teens. Reading the reviews got me thinking about a babysitter episode of my own, when I was nine or ten…

To be fair, Tim Burton‘s Dumbo is no King Kong remake. The 1941 Disney original ran a mere 64 minutes; Burton’s newbie runs 130 minutes. Twice as long, but probably not as indulgent as Jackson’s remake, which, by the way, I will never, ever see again. 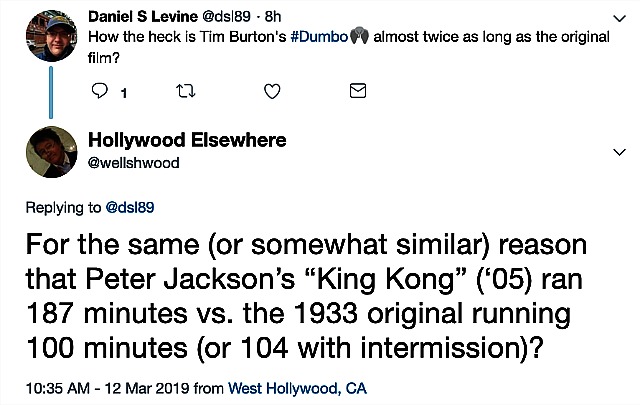 “But Tony with his compulsiveness and selfishness…he’s locked up in that fuckin’ head of his.” Such a great line — so many people on this earth are, in fact, prisoners of their personalities and pasts and genetic inheritance…and a lot of them doing solitary.

When I think of Daniel Patrick Moynihan, the first thing that comes to mind is his distinguished record of service as a New York Senator from ’77 to ’01, and as a liberal but practical-minded government guy (Labor Dept. under Kennedy and Johnson, adviser to Richard Nixon, U.N. ambassador under Ford). The second thing is that pulled-down, checked-pattern cap he used to wear when he walked around Manhattan. The third thing is that line he said after JFK was murdered, which went something like “if you’re Irish you know that sooner or later life will break your heart.”

The Writers Guild of America has issued a blistering report that explains the reasons for their displeasure with the top four Hollywood talent agencies, and basically accuses them of extensive and illegal conflicts of interest. The report basically says that the four agencies aren’t really interested in “representing writers” as much as raping and pillaging and becoming super-kingdom conquistadors with their fingers in all kinds of whipped-cream money pies.

“While the major agencies have pursued growth through conflicts of interest, these practices contravene how agents are required to act under state and federal law,” the report said. “By maximizing their own profits and now the profits of outside investors, these agencies have strayed from their core purpose of representing the interests of their clients.”

Variety: “The report, titled ‘No Conflict, No Interest,’ targets CAA, WME, UTA, and ICM Partners and asserts that the four agencies handle 75% of the transactions involving the 12,000 members of the WGA. It was issued at an audio news conference Tuesday and comes amid an acrimonious battle between the guild and the Association of Talent Agents.”

Four years ago I wrote that I’ve always respected Zimmer for having uttered, when he was at ICM nearly 30 years ago, an uncharacteristically blunt (and, as it turned out, prophetic) assessment of the basic nature of Hollywood’s agent culture:

“The big agencies are all like animals, raping and pillaging each other day in and day out.” (My admiration grew years later when Zimmer’s thought was echoed by Matt Zoller Seitz when he said in a 2006 Slate piece that Barry Lyndon was about “animals in clothes.”)

Zimmer’s quote, which resulted in ICM chairman Jeff Berg showing him the door, was first reported by Variety (I think) and almost concurrently by Spy‘s “Celia Brady”.

…Chris Pratt will be an amiable, cruise-along, conservative-minded, go-for-the-paycheck beefalo…forever teetering between “well-fed” and “whoa, time to watch the intake and hit the treadmill.”

As the fiancee of Katherine Schwarzenegger and future son-in-law of “green” Republican Arnold Schwarzenegger, Pratt is well allied. He’s kind of a John Wayne figure, in a way. Fraternal, smiling, “big,” a traditionalist with his hand out and ready to rock ‘n’ roll.

And I don’t care how amusing the intro to the trailer is (“Sorry, guys, you can’t watch this“).

And I don’t care how shitty the reviews are, to wit: “Those who find joy in 11-year-olds dropping the F-bomb, and otherwise talking smack they really don’t understand, will be in hysterics for the full hour and a half of Good Boys. Anyone looking for a little more in the way of comic inspiration is likely to be disappointed by this mediocre comedy from director Gene Stupnitsky and co-writer Lee Eisenberg” — Variety‘s Dennis Harvey.

Nothing will overtake my initial impression about Good Boys (Universal, 8.16), which was that totally moronic, p.c.-inflamed, tinted-blackface controversy that erupted for a day or two last August. The one involving Good Boys (Universal, 8.16), and which ignited after TMZ posted photos of a stand-in for 11-year-old Keith Williams wearing makeup to darken his skin color? Which resulted in producer Seth Rogen apologizing, etc.? And which Indiewire‘s Zack Sharf tried to further inflame by getting at least one cinematographer to say that the practice of applying blackface for lighting purposes was “unorthodox.”

I can just tell this is good…I can sense it, smell it, feel it.

From Eric Kohn’s 3.11 SXSW review: “The teen party movie has been done and redone so many times it may as well be an algorithm, so every new movie that rises to the challenge faces heavier expectations. Booksmart, yet another buddy movie about one wild night at the end of high school, confronts these odds with a savage wit that never slows down.”

…while hating it. It’s so smartass modern attitude, so oppressively unsubtle, so CG eye-candy’ed to a fare-thee-well. Tatyana and I were eating last night in a great Indian restaurant (Flavor of India, 7950 Sunset Blvd., next to DGA) and of course they were showing Bollywood films on their two big flatscreens. I got sucked into watching one of them, and it seems so clear that Disney’s new Aladdin is essentially a bullshit pixie-dust Bollywood fantasy, aimed at the domestic family saps but also the Asian-Indian market, which will lap this shit right up.

Those brilliant marketers who assembled the trailer for Long Shot (Lionsgate, 5.3), the Seth Rogen-Charlize Theron political romcom that nobody and I mean nobody is going to buy into, presumably know that they made a bad-grammar choice in their trailer copy.

Because that’s what marketers will often do — they’ll express themselves like a typical under-educated, mall-roaming dumbass in order to speak the language (slanguage?) of the serfs. 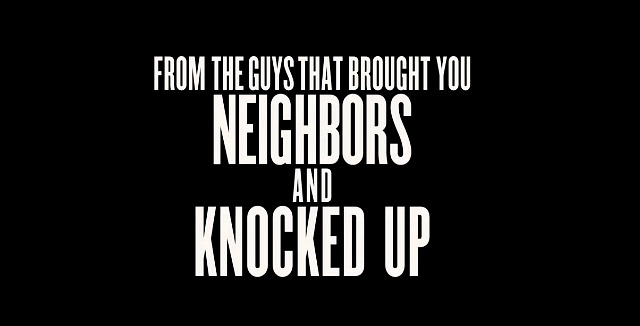 Any decent college education will excite your intellect and expand your horizons, but an elegant ivy-league education will instill a sense of confidence, assurance, well-being. Knowing that you’ve schooled and partied with other well-born, cut-above kids will put you in a good psychological place. It won’t mean a hell of a lot after you graduate, of course, even if your parents are loaded or you’re a recipient of a trust fund. Because we all have to get up early and start our own motors in order to live, discover and find our way.

The bottom line is that driven X-factor types don’t really need ivy-league educations because the most important things to have under your belt as you’re starting out are drive, curiosity, ambition and moxie. An elegant education is fine — it certainly doesn’t hurt — but 90% of the nation’s well-heeled college students regard college as a time to party and formulate their post-high-school identities and maybe give some thought to their long-range plans.

Except the vast majority of college graduates have no long-range plans. They never do. Most go-getters don’t really figure themselves out and how to get what they want until their late 20s or early 30s, if that.

But imagine what those wealthy parents ((including actresses Lori Loughlin and Felicity Huffman) who went along with the just-revealed college entrance bribery scam have passed along to their kids. Imagine the corrupt karma, the message it sends: “It was our judgment, son or daughter, that you aren’t brilliant enough to get into the best schools, and that you also lack that ambitious, hungry-for-achievement, X-factor quality that you’ll need without a good education, and so we decided that we had to flim-flam the system to get you in.”

Imagine what this could do to a kid’s self-esteem.

If I had to grapple with paying back a $75K college loan on top of every other soul-crushing difficulty I was facing in my 20s, I would have crumpled and died. Simple as that. I would have folded my tent, succumbed to despair, thrown in the towel.