The copy for Eric Kohn and Anne Thompson’s latest “Screen Talk” podcast (#250) states that Greta Gerwig‘s Little Women (Columbia, 12.25) “seems to be avoiding the festival circuit altogether.” Really? I hadn’t heard that. Word around the campfire is that the second half of Gerwig’s film delivers the goods, and that acting-wise Saoirse Ronan is “great as ever” and “a “lock” for a Best Actress nomination, and that Florence Pugh has “an earth-shattering monologue”.

Jeff Sneider tweet: “After surveying the awards landscape, chatting with sources & listening to the infamous InSneider gut, I’m prepared to go way out on a limb and tell you in July that one year after the Green Book win, the Oscar will go to one of these two movies — Melina Matsoukas‘ Queen & Slim and Destin Daniel Cretton‘s Just Mercy.” What Sneider means, I gather, is that an anti-Green Book, authentic-black-experience pushback vote will constitute a good part of the support for these two.

I saw Todd Douglas Miller‘s Apollo 11 last February at a press screening inside the AMC Century City IMAX theatre, and it was flat-out wonderful. I was knocked flat by the sheer textural dazzle of the 70mm large format images. The 93-minute doc takes you back 50 years and into the launch of Apollo 11 and of course the moon landing that happened on 7.20.69.

A significant portion of this stunning immersion — narration-free and sans talking heads — is composed of unreleased 70mm footage from the launch (look, it’s Johnny Carson!) and the ocean recovery of Apollo 11. This is blended with uprezzed 35 and 16 mm film, still photography and closed-circuit television footage, all of which was digitally scanned at Final Frame, a post-production firm in New York City.

The sum effect is one of a wowser, you-are-there voyage into the past. Except it feels like the present during those 93. It delivers an unmistakable spiritual current.

This evening I’ll be attending a special Apollo 11 screening inside the huge IMAX Corporation theatre in Playa Vista, to be followed by a chit-chat mixer with Miller. The idea, of course, is to commemorate the half-century anniversary, which is only 8 days from now. And, of course, to remind press people that this Neon release needs to be seen on a big, big screen. And that it needs to be nominated for the Best Feature Doc Oscar.

Universal release Apollo 11 on DVD, Bluray and digital streaming on 5.14.19.

An exciting 60-second drug-smuggling video was released yesterday by the U.S. Coast Guard. Recorded somewhere in the eastern Pacific on 6.18.19, it shows Coast Guard commandos chasing a semi-submersible drug smuggling vessel (SPSS) carrying “more than 17,000 pounds of cocaine, valued at about $232 million,” according to The Washington Post.

All hail the can-do, take-charge, super-macho attitude of the Coast Guard, but Hollywood Elsewhere has a question for the drug dealers. You guys allegedly have lots of dough so why are you trying to smuggle cocaine inside a semi-submersible, or a small Nautilus-like, Captain Nemo-styled craft that’s visible to patrol boats? Why don’t you use fully submersible subs, or the kind that Coast Guard guys can’t see because, you know, they’re underwater and therefore visually undetectable? 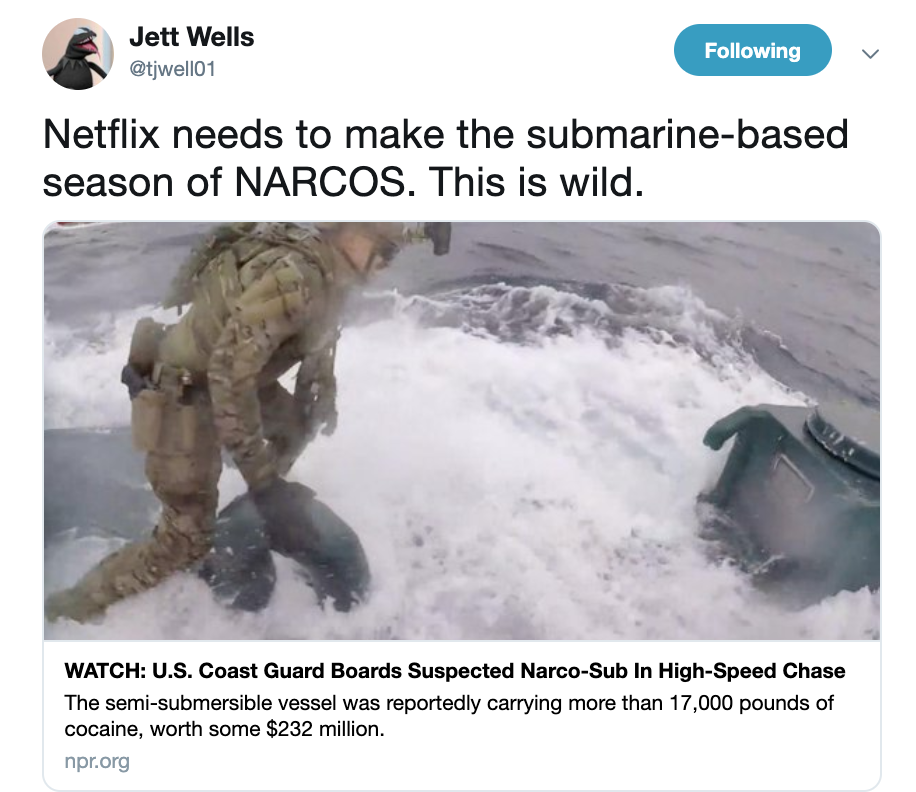 51 Comments
We Love You, Now Step Aside

I know that the HE commentariat disapproves of my watching HBO all the time, but I’ve forgotten if they approve or disapprove of Big Little Lies. I’ve been watching season #2 all along, mostly because of Meryl Streep. I wasn’t all that big on season #1, which was directed by Jean-Marc Vallee; season #2 has been directed by Andrea Arnold, but not in a style that anyone would call Arnold-esque (hand-heldy, here and there, natural light). It just feels smooth and steady for the most part.

O’Falt: “According to a number of sources close to the production, there was a dramatic shift in late 2018 as the show was yanked away from Arnold, and creative control was handed over to executive producer and Season 1 director Jean-Marc Vallee. The goal was to unify the visual style of Season 1 and 2. In other words, after all the episodes had been shot, take Arnold’s work and make it look and feel like the familiar style Vallée brought to the hit first season.”

“It was [just] as Arnold started to assemble scenes that Kelley and HBO started to see there was a problem,” O’Falt continues. “Before Arnold and her London editing team were able to even complete an official cut of an episode, Vallée started to take over. Post-production shifted from London to Vallée’s home city of Montreal, where his own editorial team started cutting what is now airing on HBO. Soon after, 17 days of additional photography were scheduled.”

So why did Kelley and his HBO bosses agree to hire a headstrong director with a distinctive dart-and-shoot style if what they really they wanted was someone who would more or less ape Vallee’s approach?

The apparent answer is that Kelley and HBO execs weren’t all that familiar with Arnold’s previous films (Red Road, Fish Tank, American Honey) and were therefore taken aback when they saw her season #2 footage. O’Falt reports that Arnold was more or less hired because of Vallee’s recommendation.

O’Falt: “The optics were not lost on many associated with Big Little Lies: A show dominated by some of the most powerful actresses in Hollywood hired a fiercely independent woman director…who was now being forced to watch from the director’s chair as scenes were shot in the style of her male predecessor.”

Unusual Dispensation: As the following is one of my favorite HE Plus essays over the last few months, I’m offering it for free as a special HE promotion. Feel free to click through:

I became an amateur stage actor between ’75 and ’76. I was living in Westport, Connecticut. My big move to Manhattan was about a year and a half off. The usual nocturnal distractions prevailed, of course — carousing, partying, movies. I also wrote program notes for the Westport Country Playhouse Cinema. And I acted in front of paying audiences. First I played the timid “Dr. Spivey” in a Stamford Community Playhouse production of One Flew Over the Cuckoo’s Nest (which I mentioned to Ken Kesey when I interviewed him in Park City in ’98 or thereabouts), and then a macho backwoods type named “Marvin Hudgens” in a Westport Playhouse production of “Dark of the Moon.” 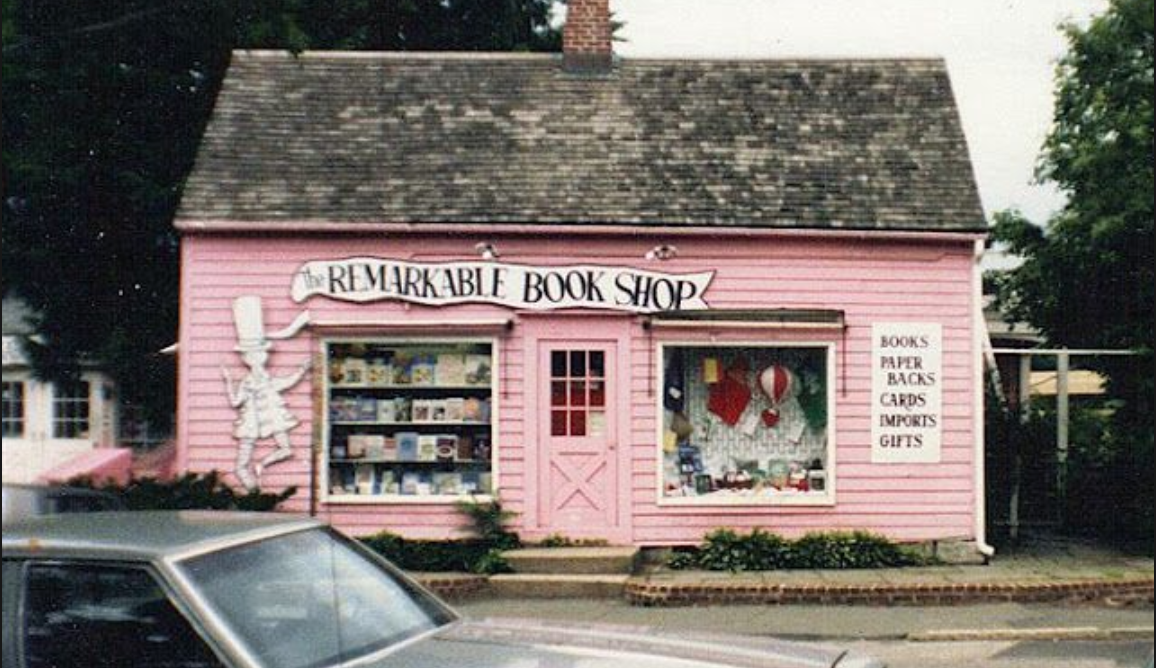